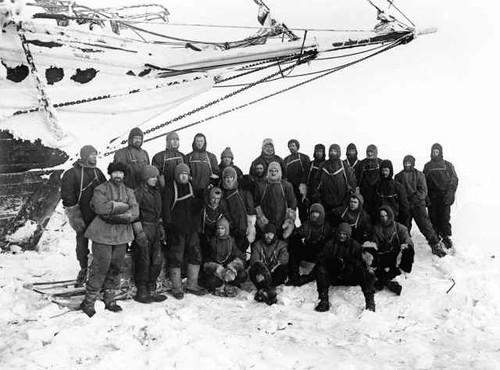 Whenever my daughters complain about lugging an extra bag of groceries, climbing an extra flight of stairs, or enduring yet another Covid-related frustration, I remind them to “think about Shackleton” so that they may reflect, during their hardship, that others have had it worse — specifically Ernest Shackleton and his 27-man crew on their quest to cross Antarctica in 1914.

When they got stranded on pack ice in the Weddell Sea in early 1915, their sailing vessel, the Endurance, was crushed by the ice’s viselike grip and sank. The men remained on the floe for several more months, setting up what they called “Camp Patience” with the remains of their ship. There, they drifted aimlessly, alone in the vast white.

Eventually they launched three lifeboats northward to desolate Elephant Island, from where Shackleton and five men braved an unthinkable, open-boat journey 800 miles farther northeast in the hope of reaching inhabited land, where he might arrange the rescue of his crew. After several more months, unspeakable hardship, and failed attempts, he returned and saved them all, two years after they had embarked on this impossible journey. Two years of endurance and patience.

As I mark the one-year anniversary of Covid, I feel hope and joy battling with monotony and fear. The vaccines are here, so are the new strains. Timid reopenings of schools and restaurants are punctuated by closures that bring fleeting disappointments and setbacks. There are everyday trials and triumphs. And I continue to repeat the mantra to my daughters (and myself).

Amid these reflections, I woke up several Sundays ago gripped by the need for spiritual sustenance. Upon arriving at church, I realized to my dismay that we were practically halfway into Lent, the season of penitential preparation for Easter, and as such a time for sacrificing something: Tootsie Rolls, that sneaky cigarette habit, the sugar in the coffee — some everyday pleasure usually fits the bill.

Covid has already brought us a year of sacrifice and mourning that continues to bewilder me. In the face of this sadness, I dream of pure, unadulterated, post-vaccine fun. Fun! Remember? Seeing a movie in a movie theater. Going out with friends. Big, gossipy parties without masks. Saying bye to our kids as we drop them off at school. Kissing and hugging friends and loved ones. So, come on. More sacrifice?

Well, yes. My daughters will roll their eyes as they read this, but Shackleton does come to mind. His was a two-year odyssey. The first year brought destruction and crisis. The second year, more uncertainties but also a vision and a strategy, as well as a thirst for survival. This would require endurance and patience but also hope and humor. They pushed forward in their inconceivable new normal, enduring the wickedness of nature and fate with fortitude, patience, and good cheer, despite being aware of the staggering odds stacked against them.

It was uncertain, even unlikely, that the Endurance’s little lifeboat would make it to the whaling station at South Georgia Island and procure a better boat with which to save the still-stranded adventurers back on Elephant Island. Yet, in the middle of a brutal storm, as one able seaman, Timothy McCarthy, stood at the helm of the lifeboat James Caird with freezing water pouring down the back of his neck, he informed his captain with a grin that “It’s a grand day, sir” because he had been a bit blue earlier.

The 22 men waiting back at Elephant Island endured days of wind, snow, gloom, sodden socks, and slimy sleeping bags. One man had a heart attack, another lost his toes, and one unlucky soul had to pull the rotten tooth of another. Yet they pored over the one cookbook they shared and chuckled as they made lists of the sweets they wanted to eat.

This epiphany came to me not at the church but in the dentist’s chair. The oral surgeon’s chair, to be precise. Now, I know that everyone has his or her own Covid-year calamity to recount, but please suffer me: After accompanying my husband through a bicycle accident, two broken wrists, and two operations last April, then getting Covid myself in December, the endurance gods rewarded me with a tooth extraction, the result of a failed root canal, which I had undertaken expressly to avoid said extraction.

I shall never forget the chill that came over me when the dentist broke the news: In an eerie recreation of a scene from the Shirley Jackson story “The Tooth,” he scribbled an improvised prescription on the back of the oral surgeon’s business card with the words “Please extract hopeless #19 — thanks.” Nor will I forget arriving, days before Christmas, at the oral surgeon’s office, where I collapsed in a crumple of tears as the anesthesia set in. What I had feared and dreaded had come to pass. That, I believe, was rock bottom.

But eventually, a moment of clarity came and I knew: The ill tooth had been removed, it was time to move forward. At what might have been the nadir of an already miserable year, my mood was lifted and I felt a glimmer of hope. This all finally came to me just a few days ago when I returned to the surgeon and he fit the implant into my mouth. No jittery nerves, no crying jags; I flipped through a book to pass the time and actually felt cheerful. The entire thing was over in 20 minutes.

I am not out of the woods yet — I must take precious care of my implant before a crown can be molded, shaped, and properly positioned. It is another crisis partly endured, and if I am lucky to survive it, life will surely throw a few more my way. That is the way of things, isn’t it?

So — sacrifice, shmacrifice. Bring it on. My 13-year-old daughter, who rejects most practices and beliefs relating to the much-disgraced church, has used this Lenten season to sacrifice various pairs of brand-new tights and jeans in obeisance to the fashion gods, at whose altar she prays. My other daughter, a 10-year-old who has already endured hardship in her young life, and must adhere to a strict, medically indicated gluten-free diet, accepted my proposal and immediately chose to give up the rainbow sprinkles with which she decorates her nightly ice cream. Me? I gave up the daily noontime can of Diet Coke. Why?

Some things defy explanation or understanding. As the Lenten period inches to a close, I cannot tell you why I continue to feel glee as I guzzle the somewhat unsatisfying Bubly and La Croix water instead of my old crutch, Diet Coke. Or why little Lottie quite cheerfully takes to her unadorned ice cream cone each night. That remains a bit of a mystery.

But I do know why I am now gargling twice a day and chewing on the other side of my mouth. And why I continue to wear a mask, obsessively sanitize my hands, socially distance, and yadda yadda yadda. The end is in sight. But, as Shackleton would remind us: Endurance. Patience.

Kristina Cordero is a writer, researcher, and translator who lives in New York City and Santiago, Chile. She regularly visits East Hampton, where her parents live.