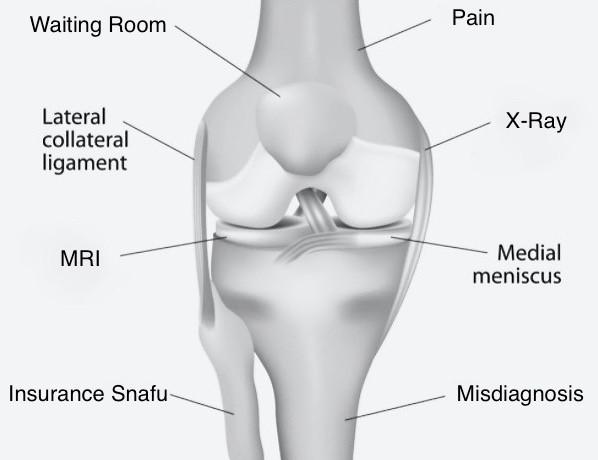 July Fourth weekend, out of the blue, my right knee blew up like a balloon and felt like fireworks. My regular doctor was away, so I drove to a walk-in clinic nearby.

“Do you have an appointment?” was the walk-in greeting.

“You need an appointment to walk in,” said the woman at the desk.

“Is this a comedy routine?”

“This is just routine procedure. Do you want an appointment or not?”

Sure. Next day, I saw a physician’s assistant from Stony Brook Hospital who moonlights at the aforementioned walk-in. He said my right knee was so hot that I must have bursitis with an infection. No history taken, no blood taken, no aspiration of site, no uncertainty of opinion. I walked out of the walk-in with a prescription for heavy-duty antibiotics.

A week later, feeling no better, I consulted Dr. Google and learned that good old-fashioned gout has similar symptoms. Having never had a bout of gout and knowing nothing about gout, I sought out a gout doctor and got gout tests and then got gout medicine and refrained from strenuous exercise for a couple weeks, resulting in, as they say, a significant reduction of swelling and pain.

On the mend, I resumed activities. Walking the dog was fine. Tennis was fine. Life was fine. Until Labor Day. Suddenly, both discomfort and inflammation increased to such a degree that I feared real damage was being done to my poor innocent knee, so I visited a well-known if taciturn orthopedist in Southampton who schedules a patient every 15 minutes.

I know the intervals of his schedule because the patient before me checked in as Mr. Two O’Clock, I was Two-Fifteen, and the woman following me was Ms. Two-Thirty. While I waited for my turn, mesmerized by slow-motion fish in a large tank, Ms. Two-Thirty was ushered into the doctor’s inner sanctum. Puzzled, I approached the front desk.

“We cannot talk about another patient,” said the secretary. “HIPAA rules.”

“HIPAA rules?” I echoed. “No one is asking about another patient. I am asking about your special clock that has 2:30 coming before 2:15. I thought only Superman could do that, or Superwoman.”

“Would you like to speak to the office manager?”

“I suppose I would.”

Five minutes later, I was told, “The office manager is not here today. She’ll be back next week.”

So I quietly continued waiting until led to the X-ray room, where, like a child passing a cemetery, I held my breath; neither death nor radiation will be inhaled by this superstitious creature.

“The doctor will see you now.”

The doctor sees nothing amiss on the X-ray, so he prescribes an M.R.I., which I get at Stony Brook Southampton Hospital the next week; a half-hour of clanky ersatz-John Cage-techno-dance-unhummable percussion. When I exit the tube, I realize that I had stupidly forgotten to remove the smartphone from my back pocket. Gasps and guffaws accompany the prediction that no phone could survive magnetic resonance imaging. Alas, the iPhone was fine. Reception was splendid. Photographs were sharper than ever. Not recommending an M.R.I. for anyone’s phone, mind you, but mine seemed to relish the raucous whirligig experience.

Good thing too. I expected a call from the taciturn orthopedist any minute. Even though walking was problematic at this juncture, I patiently waited a week before calling his office, whereupon his secretary told me I can’t call in for the results, but have to make an appointment to walk in to see the doctor to hear the results of the M.R.I. This was news to me. This was routine for her.

When I saw the doctor, this is what he said (I paraphrase): You have some arthritis and a medial meniscus extrusion. Can’t do anything about the arthritis, but you can have a total knee replacement for the meniscus tear or you can do nothing at all and learn to live with the condition. In between those two polar extremes, he said, you can have arthroscopic surgery to clean it out or corticosteroid injections or plasma platelet therapy. Your choice.

Which do you recommend, doc?

Up to me? You just presented five choices and I don’t know what any of them entail. Or cost. In time or money.

There are pros and cons to all of them and no guarantee that any of them will work. Up to you.

Up to me? I don’t even know what a medial meniscus is.

I could use a shock absorber right about now. Why is my meniscus extruding?

Wear and tear, I suppose. Too much tennis. Take up golf.

Does a medial meniscus ever heal on its own?

Maybe. If you were younger, you’d have a better chance.

My call? Doc, you must’ve seen a thousand knees like this and I have no experience whatsoever with this or any other knee. What do you recommend?

Your knee, your decision.

As usual, when confronted with a decision that might change my life, even a smidge, I just sit down and write about it.

Which is what you just read.

Bruce Buschel is a writer who resides in Bridgehampton and played tennis last Tuesday. Never mind the score.

Hoedown on the Farm, Cocktails in the Garden
Main Beach Free Concerts in Final Weeks
Services and Counseling After Death of Popular Teacher Assistant
END_OF_DOCUMENT_TOKEN_TO_BE_REPLACED