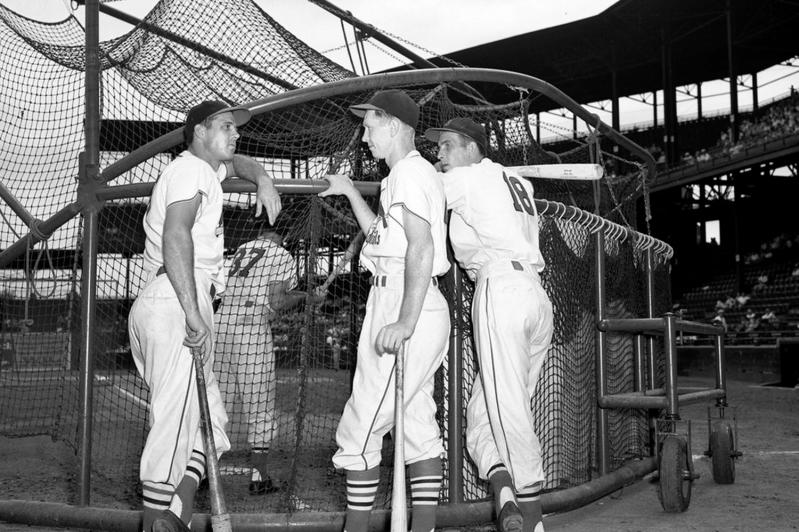 I was in Miss Larsen’s English class. We were supposed to be learning about participles and gerunds from “Warriner’s English Grammar and Composition.” A new student, Mosley DeLoche, sat next to me. She had a Southern accent. I didn’t know what flirting was, but I had felt it when she first batted her eyes at me, a transfer student, in September of 1946, in Webster Groves, Mo.

But not that day, Tuesday, Oct. 15. No English grammar. No Mosley DeLoche, though she still sat across from me, our desks all in neat rows facing the young teacher, who had moved from Hawaii. Miss Larsen, tall, young, long blond hair, a fantasy herself to the inchoate emotions of a boy 12 going on 13. On the cusp.

None of that on this day, Oct. 15, Game 7 of the World Series between the St. Louis Cardinals and the Boston Red Sox at Sportsman’s Park. Miss Larsen had the radio on. We were listening to every pitch, the crack of any hit, the rising voice of the announcer drawing us onto the field with his fiery words.

One of the announcers for the team, though not that day, was Dizzy Dean. He was the uncle of one of the boys in my class. I learned later, reading about it, that some English teachers in Missouri wrote to object to Dean’s grammar. He didn’t speak correctly. He said “ain’t.” I never heard Miss Larsen complain, and we were in her English class.

I had to go to the bathroom. The anxiety of Game 7 was too much. I raised my hand to be excused and walked down the hall to the boys’ room. Every door to every classroom was open. Open doors were natural ventilation before air-conditioning in schools. Usually I might hear a teacher’s voice in another class, but not that day. From every room came the sound of the radio — game on between the Cardinals and Red Sox for all the school to hear. It was quadrophonic sound before there was such a thing. In the bathroom, I peed, buttoned my pants, and walked quickly back to my classroom at the end of the hall.

The school day ended at 3, but the game was still going. The radio didn’t stop, we couldn’t just turn it off. Do I imagine staying until the game ended?

Then that eighth inning, the game tied 3-3. Slaughter got on base, but then two outs followed. Harry Walker got a hit into left-center, and Slaughter took off. It’s called his “mad dash.” What we heard was the announcer yelling, his voice like a hit into left-center itself, as Slaughter kept running, making it all the way to home as Johnny Pesky of the Red Sox threw to the catcher, Roy Partee, but too late. The score, 4-3, held. The Cardinals won the World Series.

I could have peed my pants right there even though I had gone earlier. The room went wild. Even Miss Larsen, who I think didn’t know much about baseball, was all smiles. Through our open classroom door I heard cheers echoing through the hallway from all the classrooms.

I was never good at baseball myself. I couldn’t hit, I couldn’t catch. I was usually the last picked on a team in gym class. I was embarrassed or chagrined, a near-13-year-old boy who couldn’t hit a ball? Somehow that didn’t count. I was good at other things and was well liked. Even Mosley DeLoche had flirted with me, until a classmate, Tim Moore, took her as his own.

None of that mattered. Not that day. Not Oct. 15, 1946, Game 7 of the World Series. We were all Enos Slaughter, Stan the Man, Schoendienst, and Kurowski.

And Dizzy Dean, don’t forget him, with his bad grammar.

The Rev. Robert Stuart is pastor emeritus at the Amagansett Presbyterian Church. He lives in Springs. (John Warriner, of textbook fame, had a house in Amagansett. He died in 1987.)