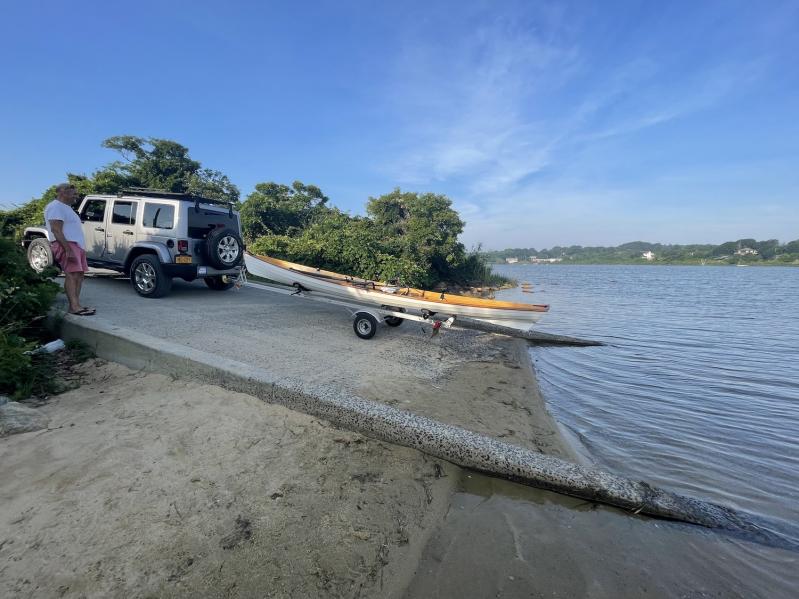 The boat launching area at the south side of Fort Pond is one of the sites Concerned Citizens of Montauk monitors in its weekly water testing.
Jane Bimson
By Tom Gogola

The latest water quality report from Concerned Citizens of Montauk stands out for a whopping outlier: A persistent and unresolved problem with elevated enterococcus bacteria levels at East Creek in Montauk hit a new high mark this week when C.C.O.M. reported a level of 9,209 MPN/ml (most probable number per millimeter). That's more than three times the number from last week (2,489 MPN/ml) — and still, nobody knows the cause of the outsized entero levels.

Meanwhile, the majority of 32 test sites monitored by C.C.O.M. registered low levels of entero bacteria, thanks largely to an absence of rain (the brutal humidity is another, if unrelated, matter).

A few Montauk places edged into medium bacteria territory in the report covering the week of July 25, including Little Reed Pond Creek on Lake Montauk and the boat ramp on the south end of Fort Pond. Those test sites came in at levels ranging from 41 to 97 MPL/ml. Entero levels of above 104 MPN/ml can pose a risk to human health.

At the unhealthy end, the east side of Napeague Harbor in Amagansett registered a 235, while Head of the Harbor at Three Mile Harbor in East Hampton came in at 428 MPN/ml — high, but nothing compared to that big bacteria number coming out of Montauk.

One bright note: After several weeks of registering consistently high bacteria levels, the area east of the culvert on Accabonac Harbor in East Hampton had dropped down to 10.

And, while green-blue algae levels were creeping up at two Fort Pond tests sites in Montauk, Jaime LeDuc, program specialist at C.C.O.M., said in an email that there was low risk that a toxic bloom of cyanobacteria would develop.

According to C.C.O.M., blue-green algae levels of 20 ug/l (micrograms per liter) indicate at high risk for developing a toxic bloom.

The New York State Department of Environmental Conservation says concentrations of 25 ug/l and above constitute a bloom; the figures in Montauk were 11.30 ug/l at the Ford Pond boat ramp and 12.65 ug/l on Industrial Road — slightly higher than last week but still in the low-risk zone.

Mashashimuet Park's History and Future
A Conference for Young People to Create Solutions
Get Outside, Get Moving
END_OF_DOCUMENT_TOKEN_TO_BE_REPLACED