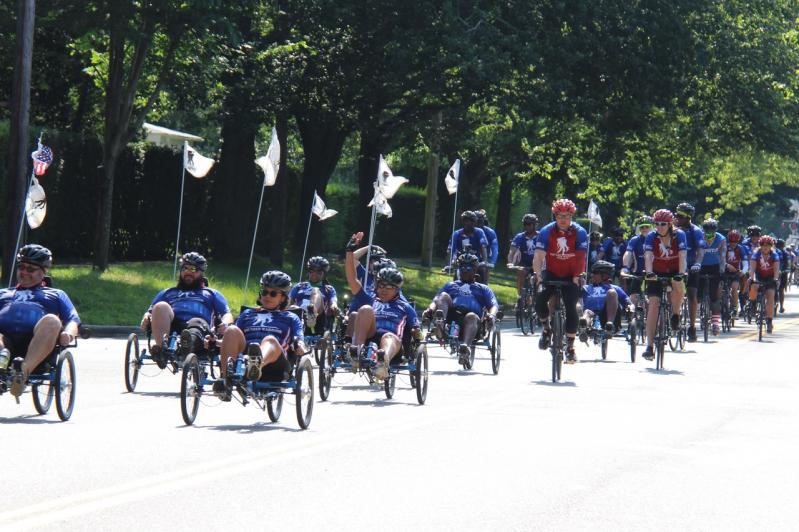 Soldier Ride the Hamptons returns to Amagansett Saturday morning, when about 40 men and women who suffered traumatic injuries in the Iraq and Afghanistan wars will ride their cycles from the Amagansett Firehouse to Sag Harbor and back. The 16th annual ride kicks off at 8:45 a.m. and, said Peter Honerkamp, an organizer, this year's event harks back to Soldier Rides of yore when members of the community were encouraged to ride along with the wounded warriors.

Mr. Honerkamp is an owner and manager at the Stephen Talkhouse and a key figure during the early days of the Afghanistan and Iraq wars in the local effort to host benefits for veterans at the legendary Amagansett music venue. In an interview, he recalled how those concerts were part of the genesis of an organization that would become the Wounded Warriors Project.

The first Soldier Ride took place back in 2004 when Chris Carney, an East Hampton native, got the idea to ride his bike across the country to raise awareness about veterans' health, Mr. Honerkamp said.

Neither he nor Mr. Carney is a veteran — "Chris was just a regular guy doing a civilian gesture," he recalled as he told the story of the Talkhouse using a beer bucket to raise $8,000 to pay for Mr. Carney's ambitious and altruistic adventure.

The trip took 44 days and raised "a couple of million bucks," said Mr. Honerkamp. During the 5,000-mile journey, Mr. Carney met two amputee vets in Colorado who told him that they would join him for another cross-country trip if he was up to it. He was. That second trip raised $10 million "and as a result, it literally launched the Wounded Warriors Project," said Mr. Honerkamp, "which has become the largest veterans' advocacy group in the country."

The beauty of the Soldier Ride is that "what you suddenly had was not just a fund-raiser but a rehabilitative tool," said Mr. Honerkamp — a ride that, by 2006, was humming along with numerous shorter, regional rides — "soldiers would ride maybe 15 miles a day and we did those all across the country, in Boston, Miami, Key West. We still do them," he said.

The first community ride in Amagansett took place 15 years ago. There are also community rides in Babylon (tomorrow) and New York City.

"In the old days, we had 600 to 700 community riders, but a lot of people now go to the ride in Babylon," said Mr. Honerkamp. The Covid pandemic also played a role in limiting participants, but "this year, people can again ride with the soldiers and we're hoping for 100 people to join."

He added that this year's ride would include six or seven British soldiers who had lost limbs in the post-Sept. 11 overseas wars.

In the first years of the Soldier Rides, Mr. Honerkamp recollected that many participating veterans had been blinded, burned, or had lost limbs. Since then, the Wounded Warriors Project has emerged as a leading national advocate for veterans with post-traumatic stress disorder and traumatic brain injury.

The organization also works to raise awareness (and promote federal legislation) about medical issues arising from veterans' exposure to toxic "burn pits" used to incinerate garbage and human waste. And the Wounded Warriors Project has put a big emphasis on reducing service-related suicides and improving mental health outcomes in the veterans' community.

"We didn't have the financial resources back then to reach out to those who suffered from T.B.I. or P.T.S.D.," said Mr. Honerkamp. "We're continuing to be involved."

Registration for the Saturday ride is $50 for adults and $25 for kids. Interested  and that interested community members can sign up at soldierride.org/hamptons, "or just show up at 8 a.m. at the Amagansett Fire Station," Mr. Honerkamp said.