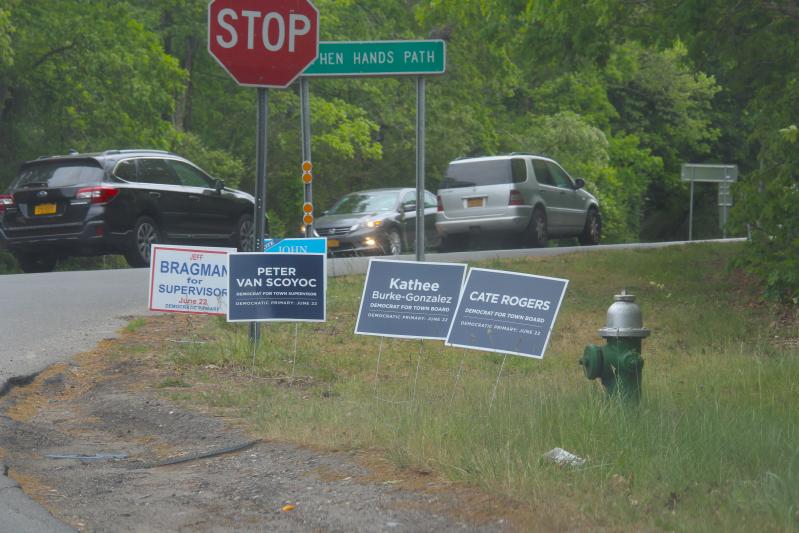 Democratic Party debates for East Hampton Town supervisor and town board happen Thursday night at 7, broadcast live on LTV's Channel 20, on its YouTube channel, and at ltveh.org.

Supervisor Peter Van Scoyoc and Councilman Jeff Bragman, who is challenging Mr. Van Scoyoc, will debate from 7 to 7:45 p.m. The three candidates running for two seats on the town board will debate from 7:45 to 8:30. They are Councilwoman Kathee Burke-Gonzalez, who is seeking a third term, Cate Rogers, chairwoman of the East Hampton Democratic Committee, and John Whelan, chairman of the zoning board of appeals. Judi Roth will moderate.

The debate is sponsored by the League of Women Voters of the Hamptons, Shelter Island, and North Fork. It will consist of timed opening statements by the candidates, a question-and-answer session, with questions submitted in advance, and timed closing statements. Questions can be emailed to Barbara McClancy, the chairwoman of the league's voters services committee, at [email protected].

Mr. Bragman and Rick Drew, an incumbent town trustee, sought the Democratic Committee's endorsement at its nominating convention in February but were rebuffed. Mr. Whelan also screened for the committee's endorsement but did not receive it. They successfully petitioned to force a primary election, and, more recently, earned the endorsement of the East Hampton Independence Party. They will appear on the Nov. 2 general election ballot regardless of the Democratic primary's outcome.

The postmark deadline for requesting an absentee ballot is June 15. Those applications are available on the New York State Board of Elections website at elections.ny.gov. Questions can be directed to the Suffolk County Board of Elections at 631-852-4500.