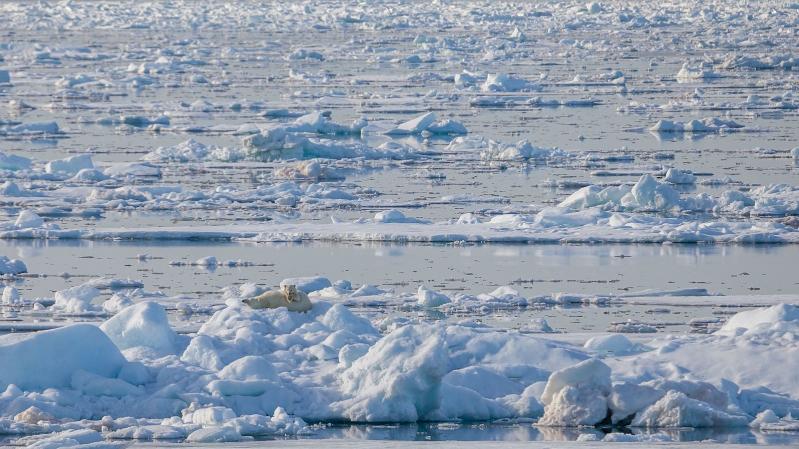 An early summer image of the Hinlopen strait at the Arctic archipelago of Svalbard.
Andreas Weith/Wikimedia Commons
By Bella Lewis

Recent weather has been a warmup for Hamptons Observatory's next virtual lecture, "NASA's Airborne Lab: Mapping Polar Ice," co-sponsored by the School of Marine and Atmospheric Sciences. On Thursday at 7 p.m. Walter E. Klein, a navigator for NASA, will share details of his current work including as a project to map the world's polar ice.

With the Airborne Laboratory, Mr. Klein's travels are as geographically diverse as they are scientifically diverse: mapping polar ice in Antarctica from an altitude of 1,500 feet and studying pollution by flying the DC-8 in corkscrew patterns over both an Asian megacity and California's Central Valley.

In addition to his work with the Airborne Laboratory, Mr. Klein will discuss the Stratospheric Observatory for Infrared Astronomy, a Boeing 747SP aircraft modified to carry a 2.7-meter reflecting telescope.

Flying into the stratosphere at 38,000 to 45,000 feet puts SOFIA above 99 percent of Earth's infrared-blocking atmosphere, allowing astronomers to study the solar system and beyond in ways that they cannot with ground-based telescopes. The observatory's mobility also allows researchers to observe, from almost anywhere in the world, transient events that often take place over oceans where there are no telescopes.

Registration can be done online at KleinTalk.eventbrite.com. Those registering will receive an email from Eventbrite that contains the link, meeting ID, and password needed to join the meeting.

Spring Has Sprung at the L.V.I.S. Shops
An Online Auction for ARF
A Rescheduled Telephone Town Hall With Lee Zeldin
END_OF_DOCUMENT_TOKEN_TO_BE_REPLACED