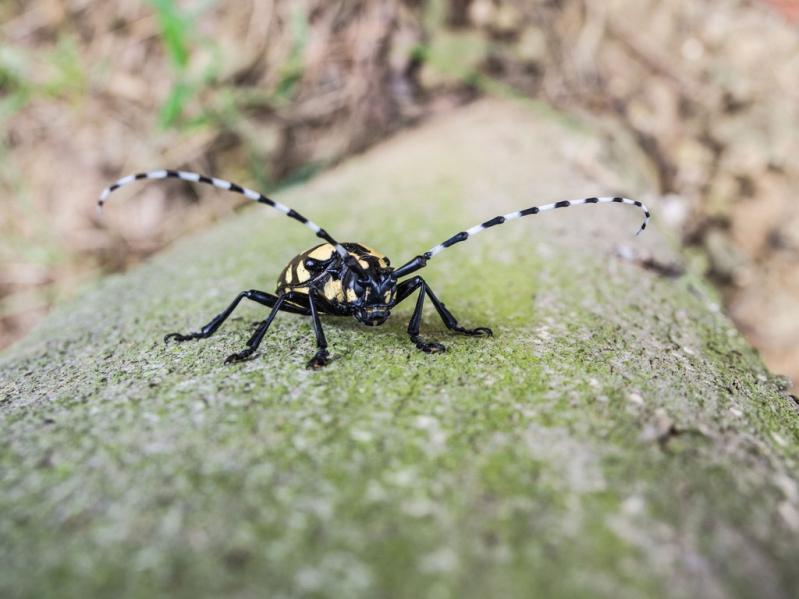 August is prime time for spotting the wood-boring Asian longhorned beetle, an invasive pest that continues to be seen on Long Island.

The U.S. Department of Agriculture has declared August Tree Check Month, as the beetles emerge this time of year. After feeding inside tree trunks and branches, by the time peak summer rolls around the Asian longhorned beetle has chewed a tunnel from which it will emerge as an adult, the U.S.D.A. says.

The beetle attacks 12 types of hardwood trees in North America, such as maples, elms, horse chestnuts, birches, and willows. Infested trees do not recover and will eventually die, posing the safety hazard of falling trees and branches -- especially during storms. Checking trees for signs of the beetles can protect property as well as contribute to the U.S.D.A.'s efforts to eradicate them, the agency has said.

People can look for distinctive markings such as black-and-white antennae that are longer than the insect's body, a shiny black body with white spots that is about 1 to 1-1/2 inches long, and six legs and feet that can appear bluish in color.

Additionally, trees that are likely infested will have round exit holes the size of a dime or smaller in the trunk and branches. Shallow oval or round scars in the bark could be where the adult beetle chewed an egg site. Sawdust-like material called frass, lying on the ground around the tree or in the branches, might also be visible. Usually dead branches or limbs falling from an otherwise healthy-looking tree are a good indication of infestation. A federal quarantine is now in place to prohibit the removal of wood from infested areas, which, as of June, include the Village of Amityville.

"As people use firewood this summer, we are also asking them to buy heat-treated and certified wood rather than move untreated firewood long distances, which can potentially spread [the pest]," said Josie Ryan, a national operations manager for the U.S.D.A. eradication program. "You can also responsibly gather firewood where you will burn it or buy it in the area where you will use it."

It is possible to eradicate the pest; recently, the U.S.D.A. and its partners declared Brooklyn and Queens free of the Asian longhorned beetle. The insect has also been eradicated from areas in Illinois, New Jersey, Boston, parts of New York, and portions of Ohio.

The beetle is not harmful to people or pets, the U.S.D.A. said. If possible, anyone seeing the insects should take pictures and capture them in a durable container and freeze them, which helps preserve them for identification. The beetles and the tree damage they cause can be reported by calling the Asian longhorned beetle hotline at 866-702-9938 or visiting asianlonghornedbeetle.com.