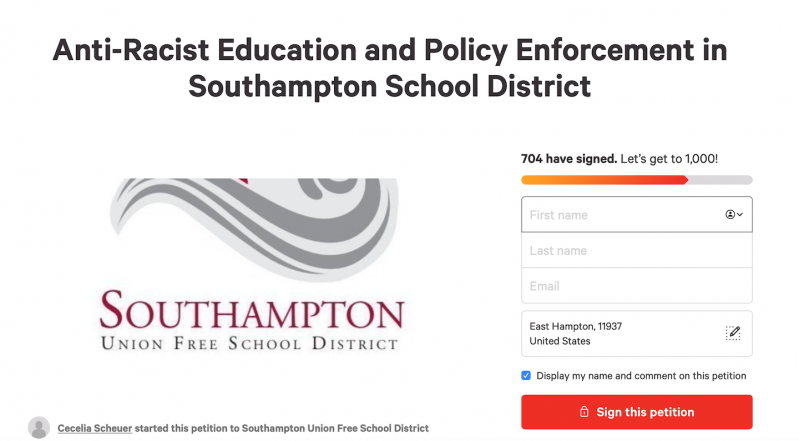 A screen shot of the petition on Change.org.
By Christine Sampson

A group of alumni and current students of Southampton High School has launched a petition on the website Change.org urging the Southampton School District administration, school board, faculty, and staff to make changes to the curriculum and policies in light of what they believe are "overt and covert forms of racism" in the district.

The petition, which garnered more than 700 signatures as of 10:30 a.m. Tuesday, says that "it is simply not enough to decry racism."

"The mission statement of the Southampton Union Free School District states that 'Southampton School District, in partnership with our diverse community, will educate students in a safe, supportive environment and equip them with the knowledge, values, and skills to become responsible citizens in a dynamic global society,' " the students and alumni wrote. "This statement, while well-intended, strays from the reality of how systemic racism and structural inequality, the very foundation of our society, are touched upon (or rather, not touched upon) in our schools."

They assert that "white-washed academic curriculum, macro and micro-aggressions, and glaring racial divisions within and outside of the classroom" are ever-present.

The petition goes on to suggest changes to the curriculum, both digging into specifics and outlining broad approaches. Its reading list includes "Just Mercy" by Bryan Stevenson, "I Know Why the Caged Bird Sings" by Maya Angelou, "White Fragility" by Robin DiAngelo, "So You Want to Talk About Race" by Ijeoma Oluo, and several others. The petition suggests that students be exposed to films such as "Selma," "The Hate U Give," "Dark Girls," "Roots," and "Taking Aim: The Story of the American Indian Movement." There are numerous podcasts, articles, and children's books on the list as well.

The suggestions also include extending diverse and inclusive curriculum approaches to the sciences, arts, and humanities, but says, "We see the most dire need for reform in U.S. history classes." The petition also calls for more training in combating bias and cultural sensitivity for all employees, including security guards; examining disciplinary practices that hold all faculty and students accountable for discriminatory actions, and increasing the diversity of the faculty and staff. The petition also requests that the district bring in speakers not just on the Black Lives Matter movement but also on Native American history, immigration, racial injustice, and white privilege.

"Racism is not just an individual character attribute or chapter out of a history textbook," the group wrote. "Its formal definition encompasses the socioeconomic and political structures, actions, and beliefs that maintain an unequal distribution of privileges, resources, and power between white people and people of color. If there is anything the last few weeks have taught us, it is that education and the exposure to unknown truths serve as one of the most powerful tools in formulating people's world views and implementing positive change."

Nicholas Dyno, the Southampton School District superintendent, said in a statement that the district "values the input and opinions of its students and community. As previously stated, we will continue to evaluate our curriculum and review past practices to best serve our diverse student population."

The petition can be accessed on Change.org by searching for "Southampton School District."