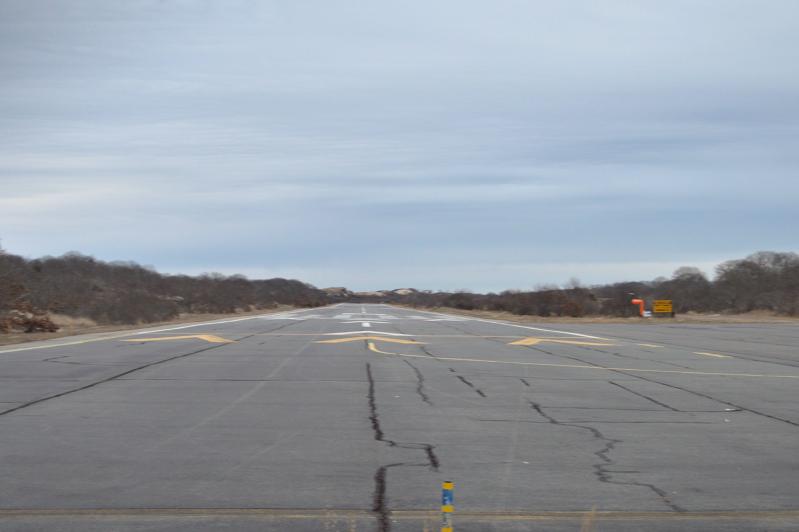 Montauk Airport could see enhanced air and road traffic with new regulations under consideration for East Hampton Airport. Residents urged the town board this week to respect the community character as they consider those regulations.
Tom Gogola
By Tom Gogola

Consultants for East Hampton Town gave a brief presentation at Tuesday’s town board work session spelling out the latest steps in the town’s march toward some resolution at East Hampton Airport. The emphasis was on a public comment period that’s open through Friday, Jan. 27 — but also on public comments from several Montauk residents concerned about what changes at the airport might mean for the small privately owned airport in a far-flung part of the hamlet.

The attorney Dan Ruzow from the Albany law firm Whiteman Osterman & Hanna told the board that “public comment is the biggest push today” as he spelled out ongoing work to produce a draft environmental impact statement for the town as it works to possibly transition the airport from a public one to a prior-permission-required model — or possibly even close it, eventually. “It’s a key opportunity for public comment to consider long-term operational changes” at the airport, Mr. Ruzow said. The consultants released a draft G.E.I.S. in December to guide a court-ordered review process under the State Environmental Quality Review Act.

Those changes might see new policies at the airport including regulations on when planes can fly, what sorts of planes are allowed, and new regulations around the use and storage of lead-based fuel. Also under consideration is the impact of closing the airport outright — “where legally permissible” is the oft-cited catch phrase — which would necessarily bring more cars to the roads and more air traffic to other regional airports including the Southampton Village Heliport, Frances S. Gabreski Airport in Westhampton Beach, and Montauk Airport.

Peter Feroe, vice president of municipal and land planning at AKRF, a New York City environmental engineering company, said a SEQRA review would determine whether there are significant environmental issues associated with closing the airport and identified increased noise at those airports, changes in their flight operations, changes in traffic patterns in and around the airports and changes in so-called “community character.”

The latter was emphasized by several Montauk residents, including Kelly Bloss, who urged the consultants and board to pay close attention to potential impacts at the airport at the end of East Lake Drive there — emphasizing that any review of potential traffic impacts in the hamlet ought to expand beyond Route 27 and East Lake to other egress roads off Montauk Highway including Second House Road and Flamingo Road. Ms. Bloss also stressed that the traffic review ought to be “an extended study period” that includes a review of weekend peak hours and non-holiday peak hours in July and August.

East Lake Drive is itself a two-lane road with no shoulders or sidewalks, she said, highlighting public safety and emergency access in her comments to the board. And special attention should be paid to the area surrounding the airport, which she described as “fragile and with lots of chances for damage to the environment.” The facility is surrounded by Montauk County Park and other public spaces, which feature miles of trails, bridle paths, and extensive camping opportunities on Gin Beach.

Tom Bogdan, a retired businessman, told the board that he, too, was concerned about the potential for additional airport traffic in Montauk as he offered a detailed list of the hamlet’s bursting-at-the-seams downtown that features dozens of retail outlets, numerous restaurants, and one of the most heavily trafficked 7-Elevens in the United States. East Lake Drive itself, he said, has five hotels, five marinas, seven restaurants, the popular county park, and the state’s busiest commercial fishing facility, which deploys a steady stream of 18-wheeled vehicles on the road.

All this commercial activity, Mr. Bogdan said, was already stressing Montauk and East Lake Drive — to say nothing, he added, of additional infrastructure that could be coming to town as part of plans afoot to install dozens of new offshore wind turbines in coming years. Throw in a Montauk Point Lighthouse that brings in 100,000 visitors a year, said Mr. Bogdan, and adding to the traffic burden in Montauk with additional airport-driven traffic “is worthy of deep and significant SEQRA study.”

Richard Schoen, the chairman of the Montauk Fire Commissioners, said he had no opinion on the closing of the airport in East Hampton, but that shifting airport traffic to Montauk was a “very serious situation” from a firefighting and public safety perspective. “In my experience we’ve had at least six plane crashes in Montauk even with limited use in the past,” Mr. Schoen said. The East Hampton Fire Department maintains a special airplane-crash vehicle at the town airport, which he said would have to be part of any plan to enhance services at the privately-owned Montauk airstrip.

“That would come at a great cost to the taxpayers of Montauk,” he said in noting that airplane-crash firefighting vehicles cost about $1 million, and a building to store the vehicle in would cost another $1 million — a cost that he said might fall on the owner of the airport. “I don’t know if they’d be required to put up a facility to house a crash truck,” he said.

“I’m asking that the board look into who is responsible for providing fire suppression services at the airport — and who is expected to pay for it?”

The consultants encouraged further public input, which they said would help guide their final recommendations. Comments can be submitted online at [email protected].