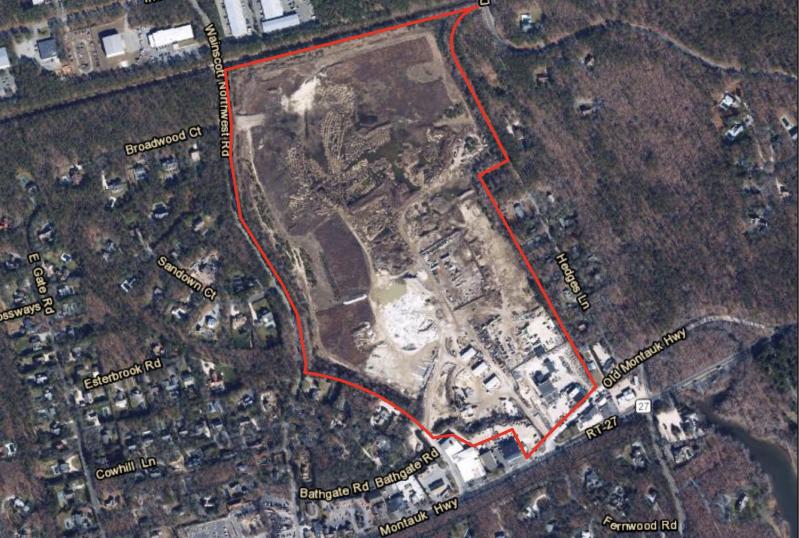 The East Hampton Town Planning Board has set Feb. 8 as the date for a public hearing on the draft environmental impact statement for the Wainscott Commercial Center subdivision. The hearing will be held in two parts at LTV Studios in Wainscott due to the considerable interest in the proposal for the former sand mine.

“The LTV room is larger and can accommodate at least twice as many people,” Samuel Kramer, the board’s chairman, said at the Jan. 11 meeting.

The first session of the hearing will run from 3 to 5:30 p.m., the second will begin at 6:30. “When people stop speaking, it’s over,” said Ian Calder-Piedmonte, a board member. “Five hours is a lot of time.”

While a Zoom link will be available to watch the hearing, people who don’t attend in person will have to phone in their comments. The draft environmental impact statement is available online by clicking here.

Each person who wants to comment will get three minutes to do so. After a suggestion at the meeting from Sara Davison, executive director of the Friends of Georgica Pond Foundation, experts in their field who are presenting technical data may be given extra time.

“Everything that happens at the pit ends up in Georgica Pond,” said Ms. Davison, in a phone call. “Consistency with community plans is something the board must address. The town board said you shouldn’t be expanding industrial use there, you should be decreasing it, and providing open space.”

Indeed, the 2005 Town of East Hampton Comprehensive Plan envisioned something very different from the 50 commercial lots now being proposed for the spent 70.4-acre sand mine.

The property is just north of the Speedway gas station and while it is camouflaged by one of the busiest stretches of Route 27 on the East End, it’s only a few hundred feet from the northern edge of Georgica Pond. The implications of increased traffic and harm to the environment are driving concern for the project.

The authors of the town’s plan recommended consolidating industrial use on the land, not spreading it out, and suggested “clean” low-intensity uses. “A limited amount of moderate-income housing can be accommodated in this area as well,” they wrote, noting that “a large portion of the reclaimed pit should be devoted to open space and recreation.”

People who want to comment on the draft environmental impact statement can do so in writing now. The comment period will remain open for 20 days after the public hearing, closing on Feb. 28.

“The real purpose of the public hearing is to give us fuel to have a discussion,” said Mr. Kramer.

The planning board is guided in its decision making by the New York State Environmental Quality Review Act, or SEQRA. According to “The SEQRA Handbook,” “Substantive comments received at a SEQRA hearing become part of the official record. They must be responded to by the lead agency in the final environmental impact statement (F.E.I.S.), and thus may affect agency findings and decisions on a project.”

Mr. Kramer said that 50 people at the Jan. 7 Wainscott Citizens Advisory Committee meeting indicated an intention to speak at the public hearing. The scope of the development has made it an existential issue for many in the small hamlet; however, its implications will extend far beyond the borders of Wainscott.

One of the hallmarks of the SEQRA law is its timelines.

If the public hearing is closed on Feb. 8, the board will have 45 days, or until March 25, to file its accepted F.E.I.S. The time could be extended if during the review of the D.E.I.S. the board decides to add a supplement. Once the F.E.I.S. is filed, the board has 30 days to make a decision on the application. With no delays, that means a decision would happen by the end of April.

“Getting close to decision time,” said Eric Schantz, the assistant town planner, in an email.

At the meeting last week, Mr. Schantz made clear that filing the F.E.I.S. isn’t the same thing as approving the application.

“Getting to the F.E.I.S., that’s basically closing the book on, we got all the information we said we needed,” to determine if the application could be judged, he said.

Planning board members wanted to be sure that the D.E.I.S. could be altered should public comment unearth new information or concerns.

“If something truly new comes up, we want to make sure it gets into the D.E.I.S. somehow,” said Mr. Calder-Piedmonte.

“Comments are there to guide our decision on the application, not the completeness of the D.E.I.S.” said Mr. Schantz. The planning board had already judged the D.E.I.S. complete at its Dec. 14 meeting.

“The SEQRA hearing is about new or missing info. I don’t think we’re going to make up our mind on this based on whether it’s popular or not,” said Randy Parsons, a board member, possibly anticipating negative public comment.

In a separate issue, after its Dec. 14 meeting, the board asked Ann Glennon, the town’s principal building inspector, to determine whether a special permit was needed because the commercial center was proposing an industrial park. However, she asked the board instead to refer the questions to the zoning board of appeals.

So, at its meeting on Feb. 7, the day before the planning board hearing, the Z.B.A. will discuss whether or not a special permit is required for the application.

Special permit or no, it will not change the SEQRA timelines.
__
Correction: Due to an editing error, an earlier version of this article had an incorrect start time for the first part of the Feb. 8 hearing. It will begin at 3 p.m.