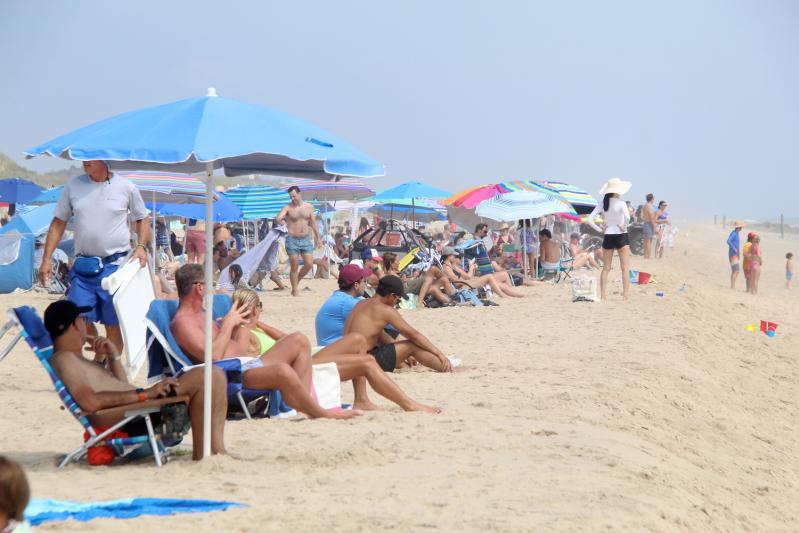 Getting cellphone service on East Hampton Town's beaches could be a little easier this summer, if a proposal to provide free Wi-Fi service at beaches and other public places comes to fruition.
Durell Godfrey
By Tom Gogola

Free Wi-Fi could be available on East Hampton Town beaches this summer, making it easier to get a cellphone call or order lunch online but perhaps a little harder to unplug for an afternoon on the sand.

The town board took up the matter at Tuesday’s work session in a discussion led by Councilman David Lys, who wants to see free public Wi-Fi hotspots at numerous town beaches — including Gin Beach in Montauk, Maidstone Park in Springs, and Atlantic Avenue Beach in Amagansett — among other proposed locations.

Mr. Lys’s plan would see the town soon issue a request for proposals for an outside provider who would be licensed by the town to provide the service, which he said would be of benefit to residents, visitors, and town workers, especially those engaged in public safety.

One of the drivers behind his proposal, said Mr. Lys, is the famously spotty cellphone service on the South Fork.

Mr. Lys said he’d like to see the service also pop up in hotspots like the Stephen Hand’s Path park, where normal wireless service is virtually nonexistent, and at the West Lake comfort station in Montauk, which is being replaced this year with a new facility.

He stressed that he wasn’t seeing free Wi-Fi “as a revenue stream but as a service,” as he addressed a question from Councilwoman Sylvia Overby about whether an airport model might be preferable — where people are charged by the hour.” (Some airports offer free Wi-Fi.)

Councilwoman Cate Rogers agreed with Mr. Lys about the benefits, but raised a question about security and the possibility that a community-wide free Wi-Fi service would be vulnerable to hacking. He suggested that any respondent to a town request for proposals would “have to provide those assurances,” and that he would look at how other municipalities that offer free Wi-Fi have addressed those concerns.

Deputy Supervisor Kathee Burke-Gonzalez said she would support an even wider reach. “I would add Indian Wells Beach” along with beaches on the bay side of town, she said. “Any beach that has a lifeguard, I think should have the service. Any place where people gather makes sense to have the Wi-Fi. If we’ve made that decision to have a guarded beach, it’s because people are showing up there.”

The public-safety aspect would be an add-on to the town’s existing emergency communications system, she said.

Ms. Overby was left to introduce a note of caution about possible negative impacts of Wi-Fi use on public beaches. The whole idea of living in a beach community in the first place is the “idea of going to the beach to get away from staring at a computer screen all day,” she said. “I have some reservations.”

“Nobody is forcing anybody to use it,” said Mr. Lys by way of response.

“If you build it, they will come,” retorted Ms. Overby.

“But they already download the music or the movie before they go to the beach,” said Ms. Rogers. “The opportunity already exists.”

Ms. Overby then wondered, “Where has this push come from?”

Mr. Lys said the advent of the Covid crisis in 2020 was a driver, as more people with summer or weekend homes in East Hampton opted to live here full time to ride out the pandemic.

“There’s a lot of people who go to the beaches who want Wi-Fi over cell because cell is spotty. They want to work on the beach,” and want connectivity through the week “so they can do business here from the beach. We might have to provide a potential service for them so they can be full timers out here,” with the added benefit that more full-time residents might translate into more volunteerism in town.

Ms. Rogers also invoked “equity issues,” as she told the board that “states and municipalities are trying to provide free Wi-Fi across communities” where a $200 monthly internet bill may be prohibitive to those of lesser means.

Mr. Lys said the urgency was at hand and that a request for proposals could go out in the next two to three weeks. A final determination on a vendor could be made by March 1; and the vendor could purchase and install the necessary equipment by the end of April or into May. “That’s why discussion has to happen around this now,” he said.