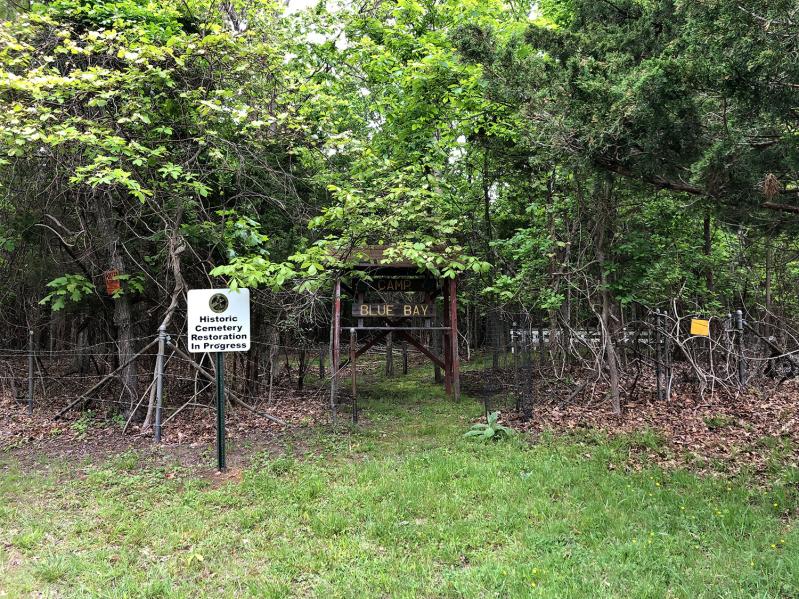 The 172-acre Camp Blue Bay in Springs may soon be home to a 185-foot cell tower, a height required for emergency services to communicate with other nearby towers.
Carissa Katz
By Christopher Gangemi

After last week’s meeting of the East Hampton Town Planning Board, a public hearing on a proposal to raise a 185-foot cellphone tower at the 172-acre Camp Blue Bay in Springs seemed likely by October. Other than lingering questions about a diesel-fueled generator, the board appeared satisfied that the application was ready to hear the public’s comments, for better or worse.

“This will be a controversial application, but it’s complete,” said Ian Calder-Piedmonte, the lead board member for the application.

The new tower, which would replace one 60 feet tall that was erected in 2010, would accommodate emergency services and phone service to the four major cell carriers. It would be five feet at the base and taper to 18 inches. Backup generators for power outages would self-test weekly for 30 minutes.

At a planning board meeting in June, Eddie Schnell, the communications technician for the town police, mentioned the generators. “American Tower does diesel backup generators, but that’s their problem, not mine,” he said, recognizing that the town’s Planning Department prefers propane generators. The town’s emergency services component of the tower would have its own backup. “The town is proposing a 50kW propane generator, so we don’t have any spillage or leakage problems,” Mr. Schnell said.

Fuel spillage could be a big problem for Camp Blue Bay, off Flaggy Hole Road. In June, Randy Parsons, a board member, made it clear that the board preferred a propane-powered generator for the phone service component of the tower as well. But by last week’s meeting, American Tower hinted strongly that it was not going to consider a propane generator.

“We don’t deploy propane generators,” said Lucia Chiocchio, a telecommunications attorney representing American Tower. “We have thousands of generators, and they’ve always been diesel.” She said the company had standing diesel contracts it had to maintain. “If the board is worried about fuel containment, we can explore secondary containment where the generator is located,” she said.

It was not clear whether the existence of standing business contracts was a good enough reason for American Tower not to explore a propane generator more thoroughly.

“Can’t they go outside their normal contract?” asked Mr. Parsons at the Sept. 14 meeting. “Long Island is on a sole-source aquifer. That’s a federal designation. We don’t want oil spilled during delivery.”

According to the Environmental Protection Agency, a sole-source aquifer means it supplies at least 50 percent of the drinking water for its service area. Should the aquifer become contaminated, says the agency, “there are no reasonably available alternative drinking water sources.”

“The more we’re hearing, the more [propane] sounds like a good idea,” said Samuel Kramer, chairman of the planning board.

The Suffolk County Health Department requires the tank to be double-contained. Nassau County requires triple containment, according to Mr. Schnell. American Tower uses a double containment tank which is placed in a concrete basin.

Louis Cortese, a planning board member, asked if putting a roof over the whole structure would reduce the chances of a fuel spill.

“It’s still going to get water and mice that speed the degradation of the steel, which would lead to a leak,” said Mr. Schnell. The county, he said, requires a monitoring system so if fuel is detected in the secondary compartment an alarm goes off. “I looked into this enough to know I don’t want to deal with it, and switched everything to propane.”

Another big issue was the height of the tower. At 185 feet, it would be visible from many scenic areas. Gerard Drive, Accabonac Harbor, Sammy’s Beach, and Gardiner’s Bay would all have views. American Tower provided a visual analysis of how the tower would appear from 30 points around the site, using a 185-foot crane as a tower simulator.

At the June meeting, Mr. Schnell had cautioned that emergency services needed the tower to be at least 185 feet.

“What would happen if the tower was 150 feet?” asked Mr. Parsons.

“The town would be forced to go to another property and build their own tower, bypassing this board,” said Mr. Schnell. “That’s as low as I can stand it, and my job is to keep police officers and firefighters safe.”

“The town is working hard to upgrade their system,” said Mr. Calder-Piedmonte, “and I take Mr. Schnell at his word that they need it. There’s no perfect spot for it. Randy brings up good points regarding the height, but I’ll say that I’m supportive.”

The Planning Department also seems supportive. Eric Schantz, assistant planning director, said that while the tower would be partially visible from some scenic areas, the fact that the pole would be placed deep within the largest wooded lot in Springs worked in its favor. “This site presents the best opportunity to provide not only emergency services, but also cell coverage,” he said.

The town’s wireless consultant, CityScape, also spoke in favor of the proposed height. B. Benjamin Evans, senior project engineer, wrote in a Sept. 6 letter that after analysis, they “conclude that the Town’s microwave antenna elevations should not be any less than proposed in the application.”

“Public safety coverage-wise, this is going to blanket Springs,” said Mr. Schnell. If the tower is approved, he said, “Springs will not need another public safety tower for the foreseeable future.”

Ed Krug, a planning board member who lives across the street from the proposed site, agreed. “I’m going to be impacted visually, but I feel it’s far and away the best site for this tower,” he said.

“Can we get information about propane for the next meeting?” Mr. Kramer asked again.

The planning board met again last night, when they were expected to vote to move the application to a public hearing.