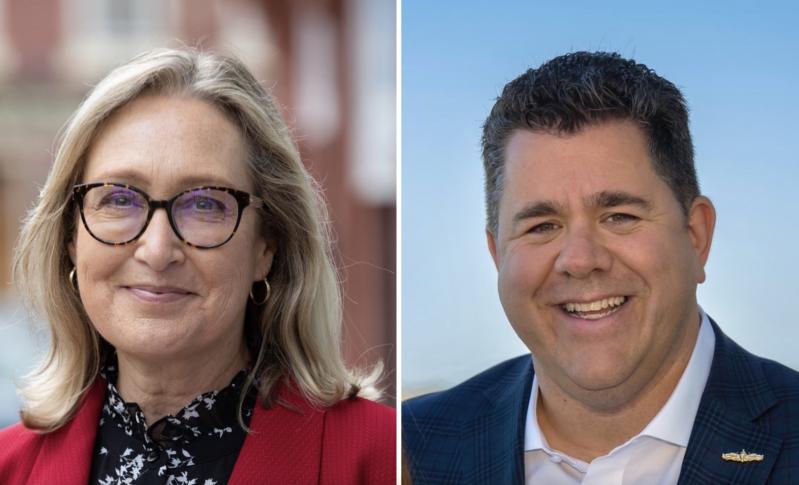 With 47 days to the Nov. 8 midterm elections, Suffolk County Legislator Bridget Fleming and Nick LaLota, the chief of staff to the Republican majority in the Legislature, are presenting contrasting views as they vie to succeed Representative Lee Zeldin, the Republican congressman who has held the seat in New York’s First Congressional District for four consecutive terms.

Ms. Fleming, the Democratic nominee, and Mr. LaLota, the Republican nominee, seek to join Congress at a moment of deep division in the country. The Supreme Court’s decision overturning the constitutional right to an abortion was the equivalent of detonating an atomic bomb in the national discourse. Scores of Republican candidates deny the legitimacy of the 2020 presidential election. Former President Trump, despite multiple investigations into his business practices and efforts to overturn his election loss, remains a kingmaker in the Republican Party. High inflation and fears of a recession have voters jittery about the future, and the Covid-19 pandemic, abating in recent months, may surge anew as winter approaches.

Mr. Zeldin is campaigning for governor of New York. He was elected in 2014 and subsequently re-elected three times, but the district’s boundaries were redrawn this year. The website Inside Elections with Nathan L. Gonzales puts the race in its “Tilt Republican” column. Ms. Fleming, a former member of the Southampton Town Board, was named a “Red to Blue” candidate by the Democratic Congressional Campaign Committee.

“On the one hand,” Ms. Fleming said, “folks are definitely aware that fundamental freedoms are under attack, and at the same time are struggling with high costs, all the strain of coming out of Covid. We’re really feeling that voters are looking for someone who knows what they’re going through. They seem to be tired of the yelling and anger, a sense that things are chaotic, but are excited about the possibility of having competent, experienced leadership that really gets what they’re going through. Especially, we’re seeing a lot of energy from women and, I have to say, allies of women. Men, women, young, old — almost everyone I talk to has a sense that fundamental freedoms are under attack and that they really need to take seriously what’s happening, particularlyaround health care for women and reproductive health.”

Voters are talking “a lot about the economy, the prices, a lot about inflation,” said Mr. LaLota, a former member of the Amityville Village Board of Trustees. “Folks want Washington to work toward real solutions to make the price of everything they’re paying for less going forward. Folks with whom I speak are very eager to drill on federal land, expedite permits to do so, get off foreign oil producers, and get refineries back, to re-establish the Keystone XL pipeline,” a permit for the fourth phase of which was revoked by President Biden last year.

Voters in the district, he said, are “also very interested about public safety and border security. They’re sick and tired of Congress punting on the federal immigration issue, want borders secure and a coherent immigration process, especially one that complements our labor needs. And they want our freedoms protected. They saw, during the pandemic, government trying to run our lives, making kids take a vaccine when that should be a parental choice.”

The price of gasoline has declined for more than three months after spiking to more than $5 per gallon. “A lot of that has to do with policy at the county level,” Ms. Fleming said. “I voted for a cap on the gas tax, and our representatives in Albany set a cap on the price itself. That has had a very good impact on reducing gas prices, which is a real strain on the economy.”

“It will be my responsibility to ensure I bring home federal infrastructure dollars to do things like dredging, beach fortification, protect the environment, ensure the maritime economy has proper protection,” Mr. LaLota said. “I want to carry on Lee Zeldin’s legacy in providing for Long Island, specifically the East End, in doing that.”

Asked about her opponent, Ms. Fleming said, “There’s no real gray area there. My opponent is anti-choice. He’s proud of being endorsed and supported by the very extremes of the party. . . . The positions he holds are extreme and are not suited to the district.”

On abortion, Mr. LaLota said that “anybody who approaches that issue honestly now understands it’s a state issue, left to state lawmakers, and in this state the law of the land is that you can walk into a doctor’s office, or even a non-doctor’s office, in the ninth month and get an abortion. If my opponent wants to make her whole campaign about that issue, she should run for state office. As a governmental matter, I do not oppose abortion when it comes to rape, incest, the life of the mother, or in the first trimester.”

Ms. Fleming’s campaign pointed out that Mr. LaLota, like many Republican candidates, has altered policy statements on his website with respect to abortion. The “Pro-Life vs. Pro-Choice” page on his website replaced the heading “Protecting Life.” In the previous iteration, it said that following the Supreme Court decision, “The next step is for the New York State Legislature to repeal the extreme provision which allows for third trimester abortions.” It now says that “voters should aim to elect State Assemblymembers, State Senators, and a Governor who share their view on this issue. That is why I will be voting for and supporting candidates who oppose second and third trimester abortions.”

“He’s tried to walk it back toward the center,” Ms. Fleming said of her opponent’s position on the issue. She noted the Republican Senator Lindsey Graham’s recent introduction of a nationwide 15-week abortion ban in the Senate and states that quickly moved to restrict or ban abortion in the wake of the Supreme Court ruling. “The fact that he’s changed his website to walk it back indicates he knows that these extreme views are not consistent with the district, they don’t fit the district. . . . With something this critically important, you want to be able to trust and rely on somebody’s position. To see him change his position and continue to be supported by these very extreme parts of the political spectrum is very troubling, and I think voters need to take that extremely seriously.”

Mr. LaLota charged that “in her own words” Ms. Fleming “has sworn allegiance to the Biden-Pelosi agenda that has helped get us in this mess. Not my words, not my rhetoric, but on her social media.” The Inflation Reduction Act, he said, “is nothing more than more government spending, a Green New Deal that does nothing but raise taxes and hire 87,000 more I.R.S. agents.”

Mr. Zeldin at the top of the Republican ticket will benefit Republican candidates down-ballot, Mr. LaLota said. “He was elected and re-elected, and we expect him to have a lot of success in the district and in Suffolk County. That will put a lot of wind in the sails of my candidacy. Nationally, because of his policy decisions, Biden is very unpopular. Very few people with whom I speak have confidence in his capability to get us out of this economic mess, and people have confidence that Republican candidates will tax less, spend less, loosen up regulations, and get our economy back on the right track.”

“A lot of ordinary people recognize we’re in a very dangerous time in terms of how fragile American democracy is,” Ms. Fleming said, “and want to see representatives who will stand up for them and this great country at a time when fundamental pieces of the country are under attack.”

Asked about Mr. Trump’s lingering presence on the national stage, Mr. LaLota said, “I’m focused on who the current occupant of the White House is, and Biden’s policies. He is the one who House Republicans will have to negotiate with in 2023.”

The candidates have yet to announce plans for a debate. Election Day is Nov. 8. Early voting will happen from Oct. 29 through Nov. 6. Information on voting by absentee ballot is available on the New York State Board of Elections website.