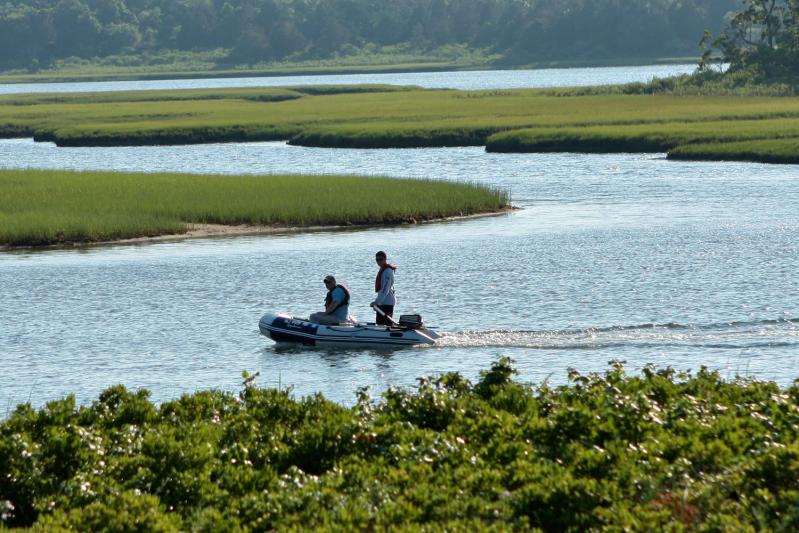 An Accabonac Harbor project that could benefit from the federal money entails large-scale wetlands improvement, considered to be “green infrastructure” under federal guidelines.
Durell Godfrey
By Christine Sampson

The Peconic Estuary Partnership has received a significant allotment of federal infrastructure money — $909,800 each year for the next five years — but the actual disbursement of that money on a local level is still some time away, the East Hampton Town Trustees learned on Monday night.

Joyce Novak, the executive director of the Peconic Estuary Partnership, told the trustees that coastal resilience and climate adaptation projects in Accabonac and Napeague Harbors are still priorities for the organization. Just how much money each will receive has yet to be determined — as well as the exact timing of each — because the Peconic Estuary Partnership’s habitat subcommittee and technical advisory committee are still evaluating the costs.

Caught in the middle is the trustees’ imminent drone survey of the coastlines within their jurisdiction, such as Accabonac Harbor, Georgica Pond, Hook Pond, Hog Creek, Napeague Harbor, and Three Mile Harbor. Preferring to complete the survey as soon as possible, the trustees authorized $7,500 last month to pay for it. John Aldred, a trustee, asked Monday whether the Partnership could reimburse them after the fact, but Dr. Novak said that’s not an option.

“It is unfortunate because it’s something that is a priority for us,” she said. “It has been on our list, for the whole estuary, to do that work. I cannot go back to fund [money] spent prior to our process.”

The Accabonac Harbor project entails large-scale wetlands improvement, considered to be “green infrastructure” under federal guidelines, Dr. Novak said. In Napeague Harbor, she said the work is considered a “coastal adaptation and resiliency project” that will restore struggling eelgrass beds, for example. National Oceanic and Atmospheric Administration Fisheries, a federal agency, says that eelgrass is “the base of a highly productive marine food web.”

For the Napeague plan, which was first developed in 2013, Dr. Novak told the trustees that “there is a high price tag for that and I know it needs to be revisited. That has to go back to our habitat committee for reassessment.”

Both the Accabonac and Napeague projects conform to President Joe Biden’s Justice40 Initiative, Dr. Novak said. According to a summary published by the White House, that program supports environmental improvements in “communities that are marginalized, underserved, and overburdened by pollution.”

“A national commitment to environmental justice of this magnitude has never been made before. . . . This investment will help confront decades of underinvestment in disadvantaged communities and bring critical resources to communities that have been overburdened by legacy pollution and environmental hazards,” the White House said.

In a follow-up conversation on Tuesday, Mr. Aldred said he doesn’t necessarily view the delay in receiving mon ey as a bad thing. That’s because both the Accabonac and Napeague projects will require a lengthy permitting process with various federal and state agencies, including the Army Corps of Engineers and the State Department of Environmental Conservation. That can happen at the same time as the Peconic Estuary Partnership’s committee discussions, Mr. Aldred said.

“The planning and permitting process will take a while. There’s time there that won’t be just idle time,” he said.

Referring to Napeague in particular, Mr. Aldred noted that “there are a lot of players that need to be brought together. That’s going to be a little more time consuming to get all parties on the same page and then move towards looking for a funding source or sources. . . . That sounds like a downside, but it could be seen as an upside in a way, since there are a lot of different players coming together to say, ‘This is a really important project to all of us.’ Then the funding might actually be a little bit easier to get than it would be otherwise.”

The East Hampton Town Board has also indicated it supports these projects. In April 2021, it agreed to match federal dollars by tapping the community preservation fund. That pot of money comes from a 2-percent real estate transfer tax and is used by the five East End towns for initiatives such as land preservation, historic easements, recreational spaces, and water-quality improvements.

“The Peconic Estuary is so important to everyone within the region — economically, environmentally, culturally,” East Hampton Town Supervisor Peter Van Scoyoc said at the time.