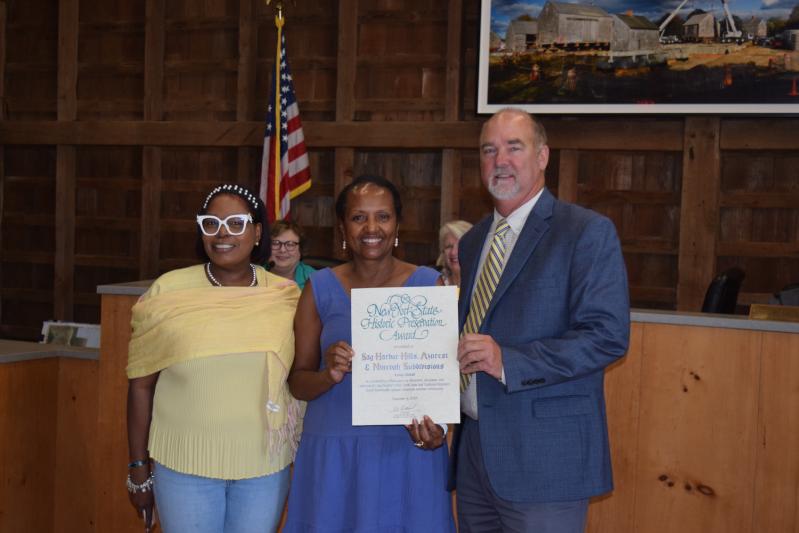 Georgette Grier-Key and Renee Simons presented to Supervisor Peter Van Scoyoc and the East Hampton Town Board a copy of the New York State Historic Preservation Award for the historic designation given to the Sag Harbor Hills, Azurest, and Ninevah subdivisions in Sag Harbor.
Christopher Walsh
By Christopher Walsh

Having achieved listing on the New York State and National Registers of Historic Places for Sag Harbor's historically Black communities of the Sag Harbor Hills, Azurest, and Ninevah subdivisions in 2019, advocates came to the East Hampton Town Board on Tuesday to discuss town-level designation.

Sag Harbor's history includes the Underground Railroad and a whaling industry that employed Black and Indigenous as well as white people. But its history as a respite for Black people began later, in the 1930s, when the sisters Maude Terry and Amaza Lee Meredith overcame Jim Crow-era segregation and negotiated the purchase of a vacant parcel of mostly marshland. Azurest and the adjacent communities, now collectively known as SANS, grew by word of mouth.

Should the board choose to move forward, it would schedule a public hearing and notify property owners and residents of the affected neighborhoods.

Much of African-American history and that of the BIPOC (Black, Indigenous, and people of color) community "seems to be on paper, and not always visual," said Georgette Grier-Key, executive director of the Eastville Community Historical Society. "It's important for us to think about the fact that this was a community that was in direct opposition to Jim Crow."

The SANS organization, formed in 2016 to advocate for historic designation, represents "one of the last remaining and thriving American examples of post-World War II middle to upper-class resort areas founded and planned by African-Americans," said Renee Simons, its president. "This history is woefully undocumented despite its historical importance and impact in America." Despite limited options, "the SANS founding residents forged forward and created three unique communities out of virgin forest land within the Town of East Hampton."

The group's goals have not changed, she said. "We wanted local, state, and national recognition as a historic district based on the area's documented cultural significance. Today, we hope the Town of East Hampton will recognize the area for its historic importance in American history."

Ms. Simons and Ms. Grier-Key presented the board with a copy of SANS's New York State Historic Preservation Award, given for its "outstanding collaboration to document, designate, and advocate for Sag Harbor's New York State and National Registers-listed, historically African-American summer community." It was also submitted to the Library of Congress.

Mashashimuet Park's History and Future
A Conference for Young People to Create Solutions
Get Outside, Get Moving
END_OF_DOCUMENT_TOKEN_TO_BE_REPLACED