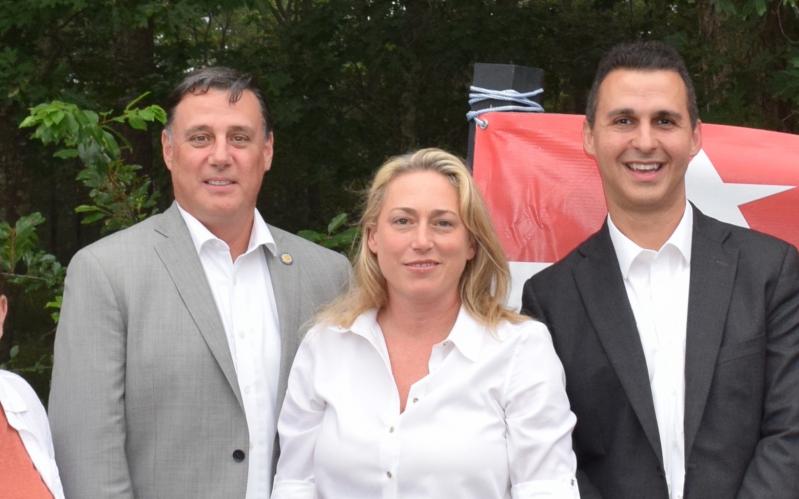 Throughout New York State, "people are talking about their safety, their freedoms, and their economy," Alison Esposito, the Republican Party's nominee for lieutenant governor of New York State, said last Thursday at the Clubhouse in East Hampton.

Ms. Esposito, who before her selection as Representative Lee Zeldin's running mate was deputy inspector of the New York Police Department's 70th Precinct, in Brooklyn, was one of several candidates and incumbents at the East Hampton Town Republican Committee's fund-raiser.

The daughter of a police chief, Ms. Esposito, a native of Orange County, lives in Manhattan. "It was just an amazing experience," she said of her 25-year career with the Police Department, "and I was grateful to work alongside some of the most compassionate, some of the most capable, and some of the most amazing police officers in the world. It was as big a gift to me as it was a career."

New York has led the country in population loss since mid-2020, according to the Pew Charitable Trusts' Fiscal 50 project. This, Ms. Esposito told The Star, is "because they're going to freer, cheaper, and safer states. Those are really what all New Yorkers are very concerned about nowadays. I've had people put my hands in theirs with tears in their eyes saying, 'Help us, we need help. Our children are not going to grow up here.' So it's been hard; it's a very humbling experience to feel that pressure."

Mr. Zeldin has made crime and public safety a focus of his campaign for governor. His running mate told The Star that personal experience justifies that focus. She "hit a wall" at the 70th Precinct. "I had almost 300 officers in my charge. Every day, I was sending my cops out to rip guns, illegal firearms, off of the waists of violent individuals, and those individuals were <I>coming back<P> to the precinct to collect their property to go home, because they were released before my officers were done processing the arrest. And these were kids and adults, and young adults that were three, four, and five times arrested for possession of a weapon. I saw my cops going out on the street and they were afraid -- not just the fear of not making it home to our families, that goes without saying, they accept that, but the fear of losing their jobs and potentially their own freedom for doing the job the society is asking them to do."

Registered Democrats outnumber Republicans in the state by a more than 2-to-1 margin, and new polls by Emerson College and Siena College, which are covered separately in this issue, give Gov. Kathy Hochul, the Democratic incumbent, and her running mate, Lt. Gov. Antonio Delgado, leads of 16 and 14 percentage points, respectively, over Mr. Zeldin and Ms. Esposito. The website RealClearPolitics puts the race in its "likely Dem" column. No Republican has won a statewide race since 2002, when Gov. George E. Pataki won re-election to a third term.

But conditions look favorable for Republicans in the midterm elections, and Ms. Esposito brushed aside the registration statistics. "This is not a red wave," she said. "This is a common-sense wave. This is Republicans, Democrats, independents, and people who have never voted before that are waking up to the problems that we're seeing in New York State and the United States of America. That's number one. We are seeing New Yorkers hitting their breaking point, and they're now seeing their children fleeing to cheaper, freer, and safer states."

"I think we're going to be able to appeal to the mainstream Democrat, the moderate Democrat that's disenfranchised, that's disheartened with the way their party is going," she said. "The independents look at the information and the facts, and they don't vote along party lines. And then we have the Republicans who are excited. They're excited because we're on the precipice of history. This hasn't been done for a very, very long time."