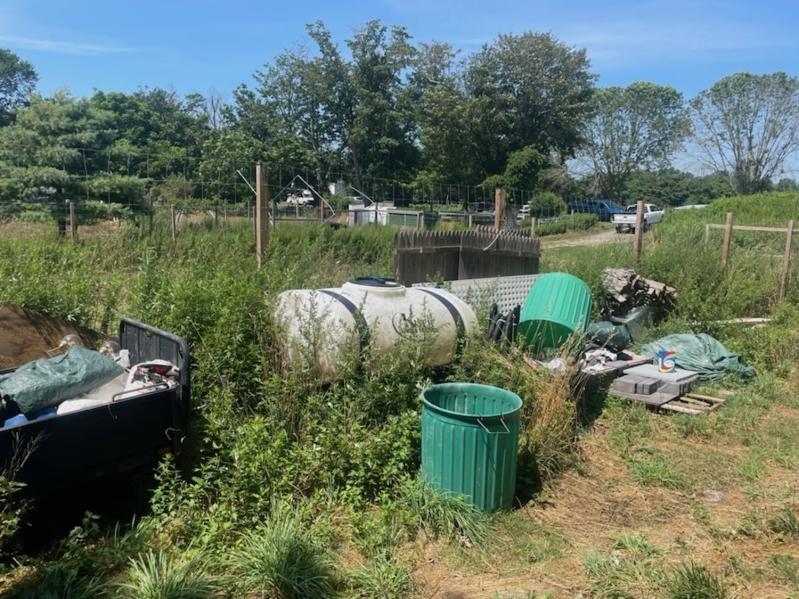 Neighbors, with the help of the village, are seeking the removal of unused farm equipment from a fallow field leased by Bhumi Farms.
Courtesy Jon Tarbet
By Christopher Gangemi

East Hampton Village has given the owner of one of the few agricultural parcels in the village 10 days to clean up its Egypt Close property before the village cleans it up instead, at the owner's expense.

Round Midnight, a limited liability company, owns the land; Bhumi Farms leases it.

The move, which came after a hearing on Friday before the village board, marks the first time that a property owner has been called to task under the village's new property maintenance and nuisance abatement law, added to the code in October.

"The reason it was created was for situations like this, when a property is not being a good neighbor," Mayor Jerry Larsen said later via text.

"Farming is not always clean," said Jon Tarbet, a land use attorney representing Round Midnight. Mr. Tarbet explained that his client had purchased the property last year, and that it came with a tenant farmer, Bhumi Farms. "The property is an agricultural reserve and it's meant to be farmed," he said.

For some homeowners in the Amy's Lane homeowner's association, which neighbors the farmland, "not in my backyard" has taken on a very literal meaning. Hank Johannsen, the president of the association, said during the hearing on Friday that through the years residents "have watched the farm with pleasure — but recently a new crop was added, and the new crop is called 'junk.' "

Mr. Tarbet explained that the "junk" was farm equipment. After his client purchased the land, Bhumi Farms chose not to renew his lease, and stopped farming. The farmer was trying to sell the equipment and would be off the property by December.
The neighbor complaints led Tom Preiato, the village building inspector, to send Round Midnight a warning letter. When the letter didn't get the response the village hoped for, Mr. Tarbet was given notice of the hearing, although it did not appear on the meeting agenda.

Vincent Messina, who acts as the village attorney, explained the village's position to Mr. Tarbet.

He cited the legislation and said that it permits the village "to act in certain cases that threatened the public health and safety" of residents. He said if the village deemed a property "unsafe," it could legally go onto it, remedy the situation, and then charge the owner for the remediation.

In a phone conversation, Mr. Tarbet said he was surprised by the tone of the hearing. "We're used to bad actor bars in Montauk, where the town is angry because of piles of violations. The hearing had that flavor. The punishment didn't seem to fit the crime in this case."

At the hearing, Mr. Preiato described the property. The "potential dangers" he listed consisted of overgrown grass and "some accessory structures that were not maintained." He said the grass was long enough that "an errant spark could ignite any combustibles at the location." He admitted that since he sent the letter, "a pretty good effort" had been made to take care of the issues. "The grass has been cut, some of the debris has been removed," he said.

Mayor Larsen wasn't impressed. "I drove by there yesterday and it's still unacceptable to me," he said. It's "still overgrown" and "still has a lot of junk" visible from the road.

Mr. Tarbet sought clarification. "It would make the line of communication easier if I knew exactly what needs to be done so I could talk to the tenant."

Mr. Messina told Mr. Tarbet that he had offered to walk the property with the fire marshal and the building inspector to explain what needs to be done. "That offer still remains open," he said.

"If your client is serious about ridding himself of the tenant and the problem that comes with him, I think today's proceedings are going to be a tremendous help to you should you choose to avail yourself of that remedy," he said.

"I don't think I can evict him based on not mowing the grass," said Mr. Tarbet. "Farming does have farming-related activities.

There are things like irrigation. Farming does have some junk. It's not going to be a vacant property; it's going to be farmed."
"Is it your client's intention to maintain the property in a way that's not violative of the code?" asked Mr. Messina. "One way or another, the property won't become a nuisance to the neighbors again?"

"It depends on what their definition of nuisance is," said Mr. Tarbet. "If they don't like farming, it will be a nuisance."

Mayor Larsen, easing the growing tension said, "All the residents agree that farming is fine as long as it's kept clean." At issue is what constitutes a clean farm, a vocation which depends on machinery and dirt.

"When the mayor told me I had to weed-whack more, I thought, 'This is getting really granular,' " Mr. Tarbet said later over the phone. "It's ironic to me. A fallow farm field couldn't be a better neighbor."

Mashashimuet Park's History and Future
A Conference for Young People to Create Solutions
Get Outside, Get Moving
END_OF_DOCUMENT_TOKEN_TO_BE_REPLACED