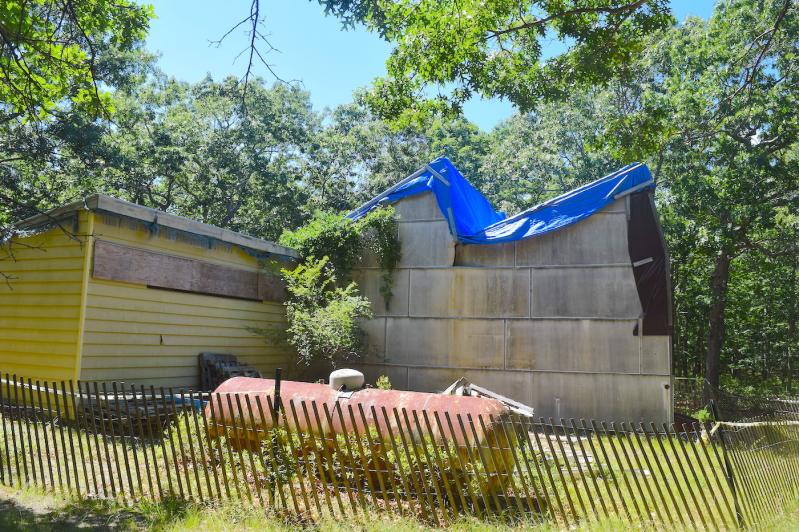 The main portion of the Springs studio of the Abstract Expressionist artist James Brooks is beginning to collapse, the East Hampton Town Board was told this week.
Christopher Walsh
By Christopher Walsh

The effort to preserve and restore the Springs house and studios of the Abstract Expressionist artists James Brooks and Charlotte Park took on new urgency this week when a consultant told the East Hampton Town Board that the 1,318-square-foot Brooks studio, called by one advocate of its preservation "a cathedral to midcentury abstract art," was beginning to collapse.

But the building's foundation is in fine condition, Drew Bennett told the board, and the preservation of the studio, one of four structures on the 11-acre Neck Path property, would more likely be a reconstruction than a restoration. The distinction could determine whether community preservation fund money could be allocated to the project.

The site also includes the married artists' 1,539-square-foot residence, Park's studio, and a cottage, the latter two less than 200 square feet each.

The town acquired the property in 2013 using $1.1 million from the community preservation fund with a plan to demolish the structures. The purchase was meant to create open space, but a group of Springs residents lobbied for preserving the buildings instead.

The town's 2014 historic landmark designation allowed for C.P.F. money to be spent toward the site's restoration, but not for its management. In 2018, the town board approved a management and stewardship plan for C.P.F.-acquired properties.

The following year, however, the property-management committee concluded that the buildings were deteriorated and damaged by vandalism, the cost of their restoration prohibitive. It recommended demolition, and the architectural review board approved a demolition permit in January 2020. That spurred a renewed push for a not-for-profit entity to manage the property.

A committee that formed to develop the management and maintenance plan issued a final draft to the town in December. In February, the committee launched a website for the Brooks-Park Arts and Nature Center.

Earlier this year, the National Trust for Historic Preservation included the site as one of the 11 most endangered historical places in the United States, and the Preservation League of New York State named the structures to its 2022-23 "Seven to Save" list.

But vandalism and weather have caused further deterioration of the buildings, particularly the Brooks studio, prompting some members of the board to urge immediate action on Tuesday.

Mr. Bennett conducted a condition assessment of the structures in 2016, though no subsequent action was taken. He performed a follow-up assessment in February. The availability of C.P.F. funding and the condition of the buildings "are two very important things we need to discuss," he said.

In the six years between assessments, the buildings have been "very badly vandalized," he said, with every window and door broken. There is a hole in the roof of the residence. Water has infiltrated the Brooks studio, causing mold and mildew. Worse, the I-beam that supported its sawtooth roof "has basically dropped," he said. "The main part of the studio is now beginning to twist and slowly collapse." Much of the wood has decayed.

In his judgment, Mr. Bennett said, "you have to basically take it down, take out the contents you can save, and put it back together. This describes reconstruction, as opposed to restoration." The studio, he wrote in a memorandum to the board, "needs to be demolished and removed from the program or demolished and reconstructed historically accurate or replaced with a more modern and useful building to the program."

Also to be considered: If the studio were reconstructed as a place of assembly, it may require fire sprinklers, and public water is not available. As a public space, the buildings, hundreds of feet off Neck Path, would likely require a paved fire access road with turnaround. Parking spaces would be required. The studio's siding is Transite and known to contain asbestos.

The C.P.F. can fund restoration and rehabilitation of historic structures provided it preserves a cultural property consistent with accepted standards for historic preservation and the structures have a useful life of greater than five years.

"We need to figure out what we're going to preserve, and what the end use is going to be," Mr. Bennett said.

Based on a preliminary assessment, "C.P.F. would not fund for adaptive use of the property," he said. "C.P.F. most likely would not fund most of the site work. . . . It appears C.P.F. guidelines would not fund reconstruction," an important consideration if the Brooks studio is to be saved. "If you have to take it down and put it back, most people would say that's reconstruction." And the costs of reconstructing the studio, "if that's the right word, are substantial."

He presented a preliminary cost estimate for two scenarios. If all four structures are to be restored, with the Brooks studio reconstructed, the total cost could be $3.857 million. That would include $1.554 for the Brooks studio. Of the total, the C.P.F. might fund $1.31 million. Should the Brooks studio be demolished, the project's overall cost might be $2.086 million, with $1.45 million eligible for C.P.F. funding, Mr. Bennett said.

Demolition is unthinkable, several advocates told the board. Janet Jennings, a member of the Brooks-Park Arts and Nature Center committee, called the Brooks studio "the jewel of this property" and "the main premise of our whole center." She asked that the town seek a second opinion from a firm specializing in historic building assessment to determine if the structure is salvageable.

She noted that a field observation by Michael Devonshire, director of conservation at the architecture firm Jan Hird Pokorny Associates, "came to a different conclusion than the Bennett report," stating that "the condition is reversible."

Marietta Gavaris, also of the committee, said that the state and national preservation groups' recognition "clearly underscores and elevates the importance of the site." The "esteemed institutions feel that . . . all four structures on the site are an important part of this preservation proclamation."

John Mullen, a founder of the Brooks-Park preservation effort, in addition to calling the Brooks studio "a cathedral to midcentury abstract art" that must be reconstructed, said the site "has great potential for reinforcing the art focus of East Hampton, and Springs especially. Springs is a place that is the center of midcentury modern abstract art. And Brooks and Park were a major part of that."

"The fundamental question is obviously funding," Supervisor Peter Van Scoyoc said. The question as to what is an acceptable C.P.F. expenditure "is somewhat open to interpretation," and Assemblyman Fred W. Thiele Jr. "has expressed an interest in convening a group to guide the town on these questions." He said that he will seek clarification on C.P.F. funding and other sources of town money. Money could also be raised privately.

Councilwoman Sylvia Overby, referring to the numerous Abstract Expressionist artists who made Springs their home, called the movement "a part of the history of the town, so it's very important we keep this history. . . . I would like to move forward before we get too far down the road of the buildings collapsing."

If the project is not eligible for C.P.F. money, the town has to find money to fund the project now, she said.

Councilwoman Kathee Burke-Gonzalez agreed, and asked for a meeting with the Brooks-Park Arts and Nature Center committee. Ms. Jennings agreed to schedule that meeting.

Mashashimuet Park's History and Future
A Conference for Young People to Create Solutions
Get Outside, Get Moving
END_OF_DOCUMENT_TOKEN_TO_BE_REPLACED