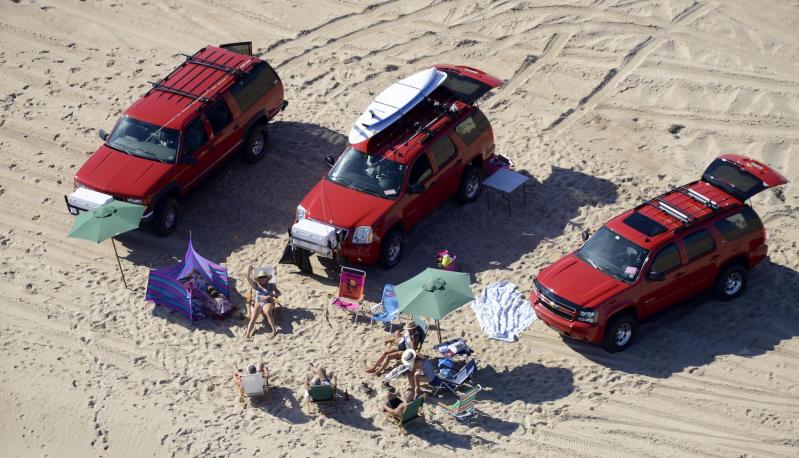 Complying with a court order, East Hampton has revoked all beach driving permits and will issue new stickers beginning in October.
Doug Kuntz
By Christopher Walsh

The East Hampton Town Board voted unanimously last Thursday to revoke all beach driving permits previously issued by the town clerk's office and declare that no permit issued by the town before or after the resolution confers the right to drive on the 4,000-foot stretch of ocean beach at Napeague popularly known as Truck Beach.

The vote was the latest fallout in litigation that started in 2009, when property owners had asserted their ownership of the beach in parallel lawsuits against the town and town trustees, who sought to defend town residents' right to drive and park vehicles on that beach.

The town will mail a postcard to all permit holders "notifying them that there is a revocation of the existing permit," Supervisor Peter Van Scoyoc said. Recipients are to keep the card as a temporary new beach permit. Permanent beach driving stickers will be issued beginning in October, he said.

The move complies with the New York State Supreme Court Appellate Division's 2021 determination that the deeds to nearby properties extend to the mean high water mark, rendering the beach privately owned and the town lacking authority to allow driving or parking of vehicles there.

This comes after State Supreme Court Justice Paul Baisley Jr. found the town and trustees in criminal and civil contempt on June 30 for violating the 2021 ruling by continuing to issue beach driving permits and not doing enough to stop people from driving or parking on the section of beach in question.

The judge also ordered the town and trustees to pay the plaintiffs' costs and attorneys' fees associated with the years-long legal battle. One of the attorneys for the Napeague homeowners associations submitted a bill to the Suffolk County Clerk for more than half a million dollars. An attorney for the other four homeowners associations in the litigation submitted a bill totaling $32,625.

The Appellate Division's ruling last year reversed a 2016 decision in favor of the town and trustees. The claims hinged on an 1882 deed in which the trustees, who own and manage many of the town's beaches on behalf of the public, conveyed some 1,000 acres on Napeague to Arthur Benson. The Appellate Division held that a "reservation" in the Benson deed allowed the public to use the homeowners associations' portion of the beach only for fishing and fishing-related purposes. However, that, the Appellate Division said, did not confer on the town and trustees authority to issue permits allowing the public to drive and park vehicles on any portion of the beach owned by the homeowners' associations.

Last year the town had posted signs on the beach indicating that vehicle access was limited to fishing and fishing-related purposes. But a modified judgment in April 2021 enjoined the town from issuing permits "purporting to authorize their holders to operate and park vehicles" on the beach deemed to be owned by the homeowners' associations. It directed the town and trustees to revoke all beach driving permits issued for the 2021 season "that do not expressly prohibit driving or parking on the beach." An order to show cause seeking to hold the town in contempt was served on June 4, 2021, which included a temporary restraining order prohibiting driving and/or parking on the beach.

As for the legal fees, following a contempt hearing in January and February, Justice Baisley found that the town and trustees had violated the 2021 court decision. He fined them $239,000, payable to five homeowners' associations and four individuals, and ordered the town and trustees to pay the plaintiffs' costs and attorneys' fees associated with the contempt motion and the contempt hearing that led to the ruling.

James Catterson, representing the Ocean Estates Property Owners Association, submitted an affirmation to State Supreme Court on July 29 "in support of plaintiffs' application of $511,784.00 in attorneys' fees and $25,745.58 in costs and disbursements, for a total of $537,529.58 that Plaintiff incurred in connection with the contempt proceeding before this Court enforcing Plaintiff's rights" under the February 2021 decision and April 2021 modified judgment.

For his own services, Mr. Catterson billed $1,285 and $1,350 per hour, adding in a footnote that the two rates "reflect customary periodic rate increases" between 2021 and 2022. For seven other employees of the Pillsbury Winthrop Shaw Pittman law firm, where Mr. Catterson is a partner, he billed between $395 and $1,040 per hour.

A significant portion of his affirmation defends the fees. The town, he wrote, "flagrantly violated a lawful order of the Second Department and this Court's judgment and [temporary restraining order]. Additionally, the matter went to a hearing that lasted three days, where seven witnesses testified across 440 pages of transcript and 25 exhibits were introduced. [. . .] Significant time and skill were required to address such violations." The firm's rates "are comparable to other large law firms in the New York metropolitan area," he wrote.

In a July 13 letter to attorneys for the town and trustees, Mr. Catterson said that, should their clients refuse to engage in settlement discussions, they will be subject to removal from office. He also said that he will seek to hold both bodies personally liable for attorneys' fees and the fine.

Prior to entering private practice, Mr. Catterson was a Supreme Court justice, including 10 years on the Appellate Division, First Department.

In the Aug. 1 affirmation of Stephen Angel, representing the Seaview at Amagansett, Dunes at Napeague Property Owners Association, the Tides Homeowners Association, and Whalers Lane Homeowners Association, he wrote that the Ocean Estates Property Owners Association had sought the order finding the town and trustees in criminal and civil contempt of the February 2021 decision. He billed $450 per hour for his own services, which he set at 40.6 hours. Four other employees of Esseks, Hefter, Angel, Di Talia & Pasca billed between $300 and $400 per hour. During the contempt application and hearing, his firm had not increased rates to the current rates for four of the five attorneys, he wrote.

Fourteen residents of the town, some of them commercial fishermen, were issued summonses for trespassing during an October 2021 protest, when they drove trucks across the beach. Both Justice Steven Tekulsky and Justice Lisa Rana of the town's Justice Court have recused themselves from the proceedings, and Dan Rodgers, an attorney representing the protesters, said that he expects the cases to be assigned to the nearest adjoining jurisdiction, Southampton Town Justice Court.

"The attempt by these billionaire homeowners to steal a beach that belongs to the public [. . .] defines greed," the protesters said in a statement provided by Mr. Rodgers. "The threat to financially bankrupt public servants unless they bend to the will of the homeowners in their quest to steal a beach is outright gluttony. This case has never been about the use and enjoyment of a stretch of sand beach. It's about money, it's about real estate and property values. The lawyers for the homeowners have established one thing: the uncontrolled voracity of the homeowners for more and more knows no bounds. They will never stop. Their excessive greed demands it."