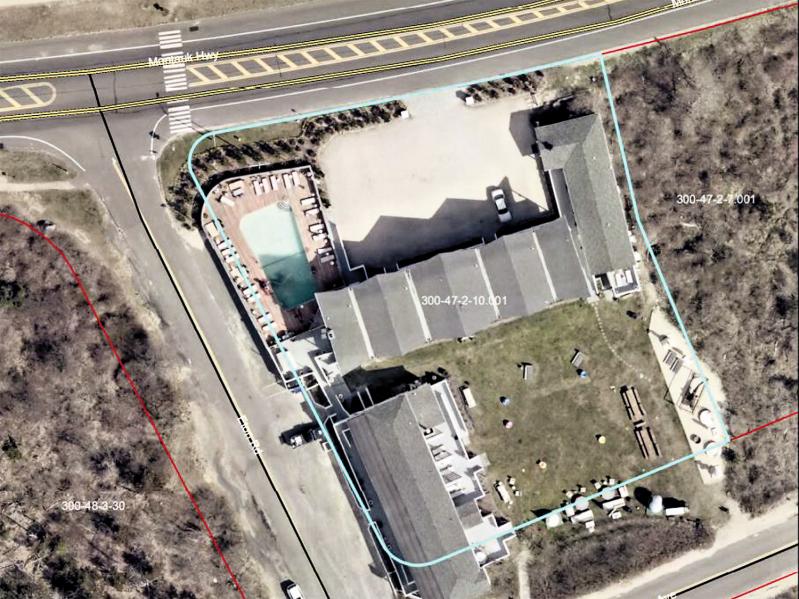 Hero Beach is already deficient in parking, with just 11 spots when 42 are required for the motel.
East Hampton Town Planning Department
By Christopher Gangemi

The East Hampton Town Planning Board did not approve Hero Beach’s request to convert its basement into a kitchen at its July 27 meeting. The sticking point was the Montauk motel’s refusal to restrict food service to “overnight guests” rather than just “guests,” and worries about how that seemingly slight difference might affect parking.

Since the application was first submitted, in 2017, the planning board has been concerned with parking at the motel, which, according to Samuel Kramer, the board chairman, sits “in one of the most crucial spots in Montauk.” It is the westernmost commercial property, at the entrance to the hamlet.

The 34-unit motel is already deficient in parking. According to Eric Schantz, assistant town planning director, Hero Beach now has only 11 spots, with three additional spots proposed for the rear lawn. “If the motel were built today,” he wrote, “the requirement would be 42 spaces.” Adding an accessory structure, a kitchen, would require another six spaces, Mr. Schantz noted.

According to the town code, the planning board is allowed to waive the parking requirements, but only if it finds the applicant is offering mitigation that would ensure no “additional traffic congestion or significant increase in the risk of vehicular and/or pedestrian accidents. . . .”

After its May meeting, the board seemed ready to approve the application, after the motel offered five restrictions and covenants to convince members that the kitchen, scaled down from an original request for a standalone restaurant, wouldn’t add to parking issues.

However, after members studied a draft of the covenants, one stood out: “Food/Kitchen/Room service and catering will only service guests of the hotel.”

Nancy Marshall, a town attorney who works with the planning board, wrote a letter to Hero Beach in June asking them to “restrict food service to only ‘overnight’ guests.”

Tiffany Scarlato, a land use lawyer representing Hero Beach, responded in a July 8 letter, “That request is not acceptable.”

A public hearing held on July 13 went well for the motel, with most of those present or on Zoom supporting the kitchen. However, the planning board was not overly impressed.

“The key issue is making sure this doesn’t become a destination for hanging out,” said Ed Krug, a board member. “We’ve been clear about that all along. I’m mystified why the heels have been dug in on this issue of overnight.”

The hearing, where many people gave solid character references to the owners of the motel, didn’t “address the underlying issues that we’ve been trying to solve since the very beginning of this application,” Mr. Krug said.

In Ms. Scarlato’s letter, she cited a number of court cases where businesses accused a planning board of overreaching in its determinations, and won. Ms. Marshall, the town lawyer, was unmoved. “I don’t find these court rulings to be particularly on point,” she said.

“I feel kind of double-crossed here,” said Randy Parsons, a board member. “I feel at the last minute their attorney is going vague again so they can do what they wanted, more or less, all along.”

Mr. Kramer noted that East Hampton Town code prohibits motels from renting rooms for less than a day. “The smallest unit is daily use. To my mind, ‘daily use’ implies ‘overnight.’ So I don’t see the harm in specifying overnight guests.”

Ian Calder-Piedmonte, after disclosing that he has sold pumpkins to Hero Beach in the past, said the motel had given the board the impression that the food made in the basement kitchen was for people who were overnight guests, so it wouldn’t affect the parking situation. If the motel refuses to restrict food to overnight guests, he said, “then it’s open to other people as well,” and then “we can’t find it meets the special-permit standards” for parking.

“I can’t support the application, based on the way our code reads,” he concluded.

“We’re not doing the people of Montauk any favors” if we don’t insist on a change to the covenant language, said Mr. Krug.

“Our purpose is not to prevent a business from growing,” said Mr. Kramer. “Our job as a planning board is to make sure the impacts of that application, and the business’s stated intentions, are not going to have adverse impacts.”

“I’d be willing to approve it with the word ‘overnight’ in the covenants and restrictions,” said the chairman, adding that he wanted to avoid a lawsuit if possible.

“All seven of us want the word ‘overnight’ in there, at the very least,” said Mr. Kramer.

In a long letter to the planning board dated Aug. 2, Jon Krasner, a principal of Hero Beach, said he was “extremely disappointed to hear that the board will not move the . . . application forward . . . Hero Beach Club asked to serve our guests food . . . in exchange for upgrading our entire septic system.”

“Parking is not an issue; it never has been, and parking should not be used anymore as an excuse to stop reasonable progress,” he wrote.

According to Ms. Scarlato, Hero Beach will address the planning board again on Wednesday night, to discuss the language in the covenant.