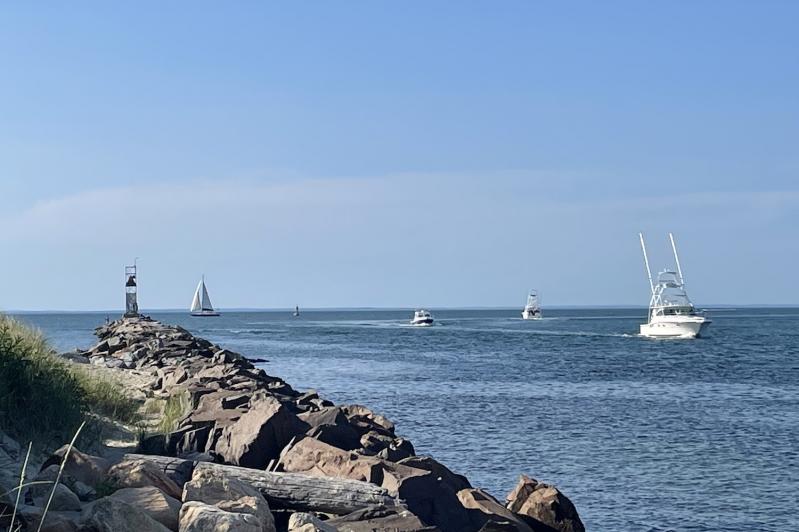 The inlet to Lake Montauk is used by as many as 500 vessels per day in the summer, said Brian Frank, chief environmental analyst in the East Hampton Town Planning Department.
Jane Bimson
By Christopher Walsh

East Hampton Town will soon enter into a project partnership agreement with the Army Corps of Engineers for long-planned improvements to the navigational channel in Montauk Harbor. Those improvements, a deepening and widening of the channel, are presently scheduled for the fall of 2023.

The Army Corps “has been working on a study of the Lake Montauk inlet for quite some time,” Brian Frank, chief environmental analyst in the Planning Department, told the town board on Tuesday. The inlet to Lake Montauk is used by as many as 500 vessels per day in the summer, he said, and Lake Montauk is home to New York State’s largest commercial fishing fleet, which landed almost $20 million worth of fish between 2012 and 2017. The United States Coast Guard travels from its base on Star Island into Block Island Sound and beyond via the inlet.

For at least 70 years, the navigation channel has featured a 12-foot depth and 150-foot width. “It’s become apparent that that has become inadequate over time,” Mr. Frank said. “There are safety concerns.” Groundings, even of unladen vessels, have increased in recent years, Mr. Frank said. “As vessels have changed, that 12-foot design depth has just demonstrated to be inadequate. It’s unsafe. It has required emergency dredging on numerous occasions over the years as the inlet has shoaled up based on what’s happening with the weather patterns and with storms.”

The plan is to increase the depth of the channel from 12 to 17 feet at mean low water and extend the deposition basin, which Mr. Frank described as “the safety zone next to the navigable inlet itself,” by 100 feet. This dredging “is going to produce a lot more sand initially — almost 174,000 cubic yards of material.” That sand, he said, will remain in the littoral system, bolstering beaches along Soundview Drive and Capt. Kidd’s Path.

The federal government is responsible for the cost of maintaining the inlet, including the improvements slated for next fall and future maintenance projects. The town also has obligations, Mr. Frank said, including 10 percent of the construction costs, or around $727,400.

The town has submitted an application to the State Department of Environmental Conservation, the other permitting agency on the project, on behalf of the Army Corps to coordinate environmental review under the State Environmental Quality Review Act, or SEQRA. “It would be the Planning Department’s recommendation that the town seek to be the lead agency, as the town usually is on interagency projects,” Mr. Frank said.

The Army Corps finalized its feasibility study for navigational improvements in December 2020. The Planning Department, Mr. Frank said, believes that the study in its final form is consistent with the town’s Local Waterfront Revitalization Program. “It’s the best plan for the inlet,” he said. “It’s my belief that everybody is satisfied with the agreement in its final form, and it’s ready for adoption by the town board.”

The town board must complete a SEQRA determination and adopt the project partnership agreement, Mr. Frank said, after which the town’s financial obligation for the project could be transferred to the Army Corps.