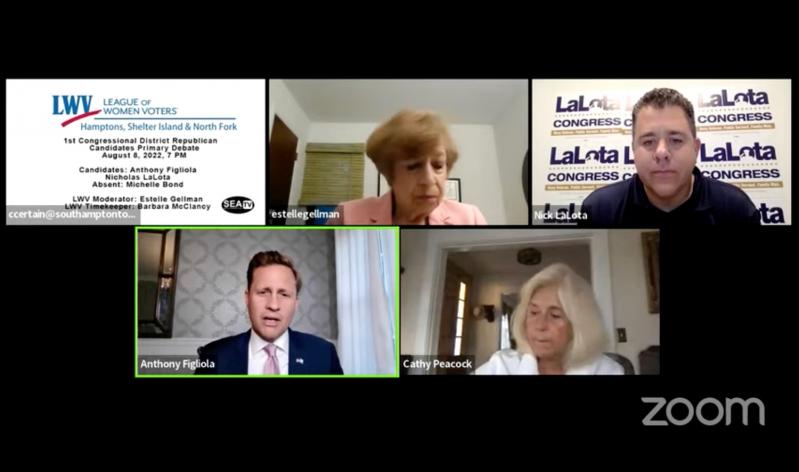 A Republican candidate to represent New York’s First Congressional District said during a debate on Monday that “Donald Trump was elected” in 2020, and he and an opponent made contradictory statements about individual rights in answering questions about abortion and the Covid-19 pandemic.

Anthony Figliola and Nick LaLota participated in the virtual debate hosted by the League of Women Voters of the Hamptons, Shelter Island, and North Fork. They both criticized a third candidate, Michelle Bond, who declined the invitation to participate.

The two candidates were largely in agreement, each portraying himself as a bulwark against a controlling and out-of-control federal government, should he be elected to succeed Representative Lee Zeldin, who is running for governor of New York.

The dichotomy between the questions posed and the answers given was often striking. “Although no evidence of widespread fraud was found in the 2020 presidential election, many citizens believe that President Biden’s election was fraudulent,” said Estelle Gellman, the moderator. “What do you believe and what would you propose to restore the confidence of citizens in our electoral process?”

“I believe that Donald Trump was elected,” said Mr. Figliola, a former deputy supervisor of Brookhaven Town who is executive vice president of Empire Government Strategies. “I believe that there was a lot of shadiness going on. Unfortunately, there’s a tremendous amount of information that just never came out.”

“We have to find a way to scrub the voting rolls,” he said, proposing amending federal law “to scrub the voter rolls if you haven’t voted in two consecutive federal elections. That’s obviously after alerting that voter that that will happen, if they’re not voting.” He also suggested mandating voter identification and allowing states to “connect with Social Security and the Department of Homeland Security to find out if people are actually citizens voting. . . . There has to be a system where the entire public feels confident that the election wasn’t stolen, that it was properly done, that there wasn’t any changes that were made to people’s ballots.”

Former President Trump continues to assert, without evidence, that the 2020 election was stolen from him. But “extensive research reveals that fraud is very rare, voter impersonation is virtually nonexistent, and many instances of alleged fraud are, in fact, mistakes by voters or administrators,” according to the Brennan Center for Justice, a nonpartisan law and policy institute. “The same is true for mail ballots,” according to the Brennan Center.

Mr. LaLota, a former Republican commissioner for the Suffolk County Board of Elections and at present the chief of staff to the Republican majority in the Suffolk Legislature, countered that “I know Joe Biden is president. You know Joe Biden is the pres dent. But on a given day. . . I’m not sure Joe Biden understands he’s the president of the United States,” citing what he said is the president’s “lack of mental acuity.” He said that he had told Newsday in 2016 that election fraud is both possible and will inevitably be attempted.

He proposed “reducing absentee ballots to those who truly need them,” meaning deployed members of the military, those with legitimate medical conditions that prevent in-person voting, and people “legitimately away on vacation.” A federal voter identification law would inspire confidence in the integrity of elections, he said, and “we need to check the social media companies who tend to throttle conservative news.” He said that he is “not looking for government to get involved in their business, but when they’re regulating and throttling conservative news, there should be a disclaimer on their website.”

Asked about the United States Supreme Court’s recent decision overturning the 1973 Roe v. Wade ruling, which said that the Constitution conferred the right to have an abortion, Mr. Figliola said the court “got it right in giving it back to the states” and “the people of the State of New York should be adamantly against any kind of constitutional amendment that will codify abortion as a human right in this state.”

He had a different take on bodily autonomy with respect to vaccines. Asked if he would favor mandates on quarantining or proof of vaccination or masking at public events should another surge of Covid-19 infection or another public health crisis occur, he said, “It’s people’s own individual right to decide what they want to do with their body, with their children, with their health care. And we’re moving away from that, we’re moving almost in sort of a communistic type of sense. We’re all just following whatever big government says.”

Mr. LaLota pivoted to third-trimester abortions, saying, “Here in this blue state, I think that we should rid ourselves of radical abortion policies. That starts here in New York with eliminating the late-term abortions that are legal, and even a nondoctor in New York can perform a late-term abortion on a seventh, eighth, or ninth-month baby.”

Fewer than 1 percent of abortions occur at or after 21 weeks’ gestation, according to the federal Centers for Disease Control and Prevention. The third trimester begins at the 27th week of pregnancy.

But on Covid-19, “we’re far enough into this health issue where folks are informed enough and folks should be able to make their own decisions on things,” he said. “This far into it, folks are aware, there’s a virus out there, they understand its impact, they’re educated about it, and they can make their own health decisions with their families, with their doctors, on how to best protect themselves. Absolutely not, would I support the federal government getting involved in these sort of things. At best, it’s a state decision, and I would want to hold my state officials accountable for not stepping too far into people’s private lives.”

Asked about “confronting the growing number of mass killings” by voting in favor of a ban on assault weapons or high-capacity magazines, both candidates said that they are gun owners and are adamantly opposed to such restrictions.

“The issue here is that we’re not enforcing the laws,” Mr. Figliola said. Referring to the May mass shooting in a supermarket in Buffalo, he said that “there were all these laws that the Democrats and Kathy Hochul, our governor, put in place and they said that that was supposed to stop mass shootings, and it didn’t because it failed at every single level.” School districts should be allowed to have armed security in schools, he said, “but ultimately we have to come up with a solution with mental health but not go after law-abiding gun owners.”

Registered Republicans can choose among Mr. Figliola, Mr. LaLota, or Ms. Bond in the Aug. 23 primary election. Early voting starts on Saturday and continues through Aug. 21.

The winner of the Aug. 23 primary election will presumably face Suffolk County Legislator Bridget Fleming, who is unopposed in the Democratic Party’s primary election. Election Day is Nov. 8.