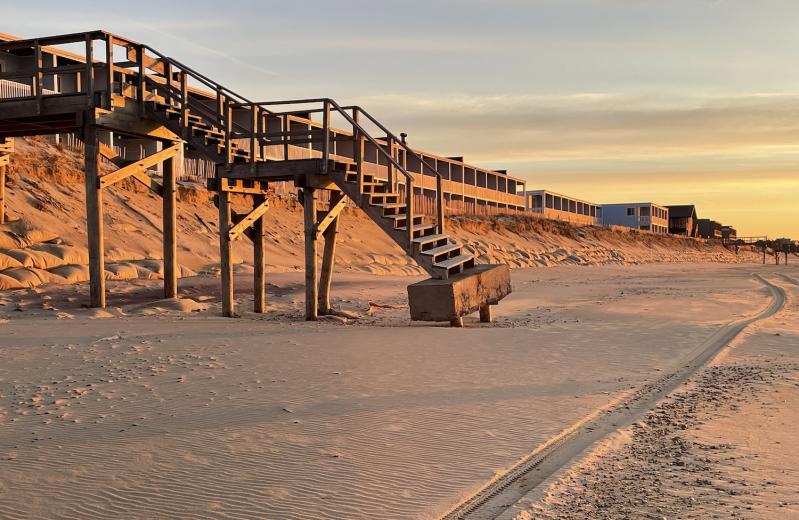 The East Hampton Town Board held a public hearing last Thursday on the adoption of the Coastal Assessment Resiliency Plan, which highlights a spate of ominous predictions as to how climate change will impact the town.

A draft of the plan, issued at the end of April and known as CARP, notes that the currently projected range of sea level rise “will transform East Hampton into a series of islands with permanent submergence of low-lying areas as early as 2070,” with other long-term effects of climate change increasing the town’s vulnerability to coastal flooding and shoreline erosion. The chance of a flood with a magnitude similar to that of the Hurricane of ‘38, at least once, is about 60 percent during the next 30 years, the study concludes. Sea levels have risen about one foot over the last 100 years, but “future rates of sea level rise are projected to be much greater,” between 8 and 30 inches over the next 30 years, according to the draft plan.

The plan “evaluates key coastal risks our community currently faces and points to a drastic increase in severity of these risks,” according to an abstract, including rising sea levels and an increased intensity of coastal storms that “undoubtedly will have an impact on nearshore homes and communities.” The need “is urgent” to immediately commence resilience projects and policies, it states.

CARP recommends an approach integrating “accommodate, managed retreat, and protect” strategies. This should include “relocation and property acquisition of select, very high-risk property” to be converted to open space and conservation land. That aspect proved controversial during discussions of the Montauk hamlet study that has since been incorporated into the town’s comprehensive plan. A managed retreat in downtown Montauk, in which vulnerable properties would be abandoned in favor of inland property through a transfer-of-development-rights mechanism, was eyed warily, if not skeptically, by some business owners.

Superstorm Sandy in October 2012 was “a wakeup call,” Ms. Tooman said, “when we saw, not just in Montauk but throughout the Town of East Hampton, significant damage to our infrastructure, to homes, to businesses, and to our ability to respond to the storm.” C.C.O.M., she said, has worked with the town to secure funding, with the consultants who prepared the plan, and with the town’s CARP committee. In the near future, she hoped, C.C.O.M. will “work with the town to move forward with implementation of this plan.”

Components of the plan “still need to be fleshed out significantly,” she said, “but we all know that and many of us are willing to work with the town to do so.”

Alison Branco, director of climate adaptation for the Nature Conservancy in New York, also called CARP an important first step. While the town is “extremely vulnerable,” she said, it “has been thinking about and working on adapting to these threats for a lot longer than most.” The town has implemented short-term solutions like beach nourishment “because they needed to,” she said, and is “using the time they’re getting from those short-term solutions to do the longer-term planning.”

The plan is “truly a nation-leading effort to prepare this town for the future with a lot more water, one where residents will adapt to live with all that water rather than fighting a losing battle against it, and one where residents and businesses can prosper, utilities and infrastructure can be secure, and the natural resources, which East Hampton has also been working for almost 100 years to protect, will have the room they need to continue to flourish.”

The federal Infrastructure Investment and Jobs Act, which President Biden signed into law in November, and New York State’s Environmental Protection Fund and, if approved by voters in November, the Clean Water, Clean Air, and Green Jobs Environmental Bond Act mean “a tremendous amount of funding is about to be available to do these kind of adaptation actions,” Ms. Branco said. “By developing this plan, East Hampton has created a blueprint and a to-do list for the infrastructure upgrades, restoration projects, and yes, even relocations needed to adapt the town for the next 100 years of success. By adopting this plan, you can really place yourselves at the front of the line to receive all of the funding to achieve that vision.”

Kevin McAllister, the founder of the clean water and coastal advocacy organization Defend H20, was also supportive of CARP’s adoption but said that it should assume a “tough love” posture toward coastal retreat, including condemnation, rather than focus on incentivizing property owners to abandon vulnerable lands. The plan identifies a 15-year span to begin coastal retreat.

“I ask the board: be poised, at 15 years, to condemn these properties to make it happen.” The board “has to be all in on this,” he said. “This is where the work begins.

At some point, you’re going to have to show tough love to property owners, that you need to basically relinquish or extinguish development and return to coastal buffer zones.”

The board will vote on adopting CARP at a future meeting.