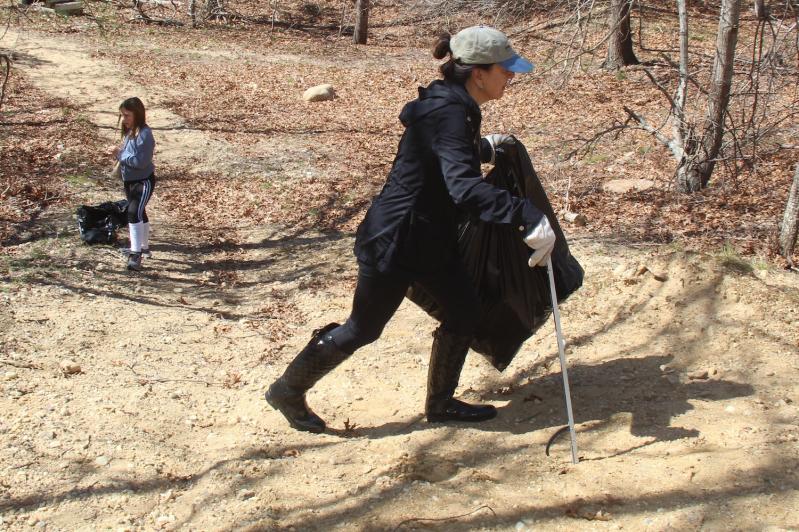 Springs neighbors joined in a cleanup of the wooded area in April.
Durell Godfrey
By Christopher Walsh

East Hampton Town’s Nature Preserve Committee has recommended to the town board that the 6.9-acre wooded area bordered by Crandall Street, Lincoln Avenue, Norfolk Street, and Fort Pond Boulevard in Springs be made part of the town’s nature preserve.

At its July 14 meeting, the committee voted, with one abstention, to recommend that the wooded parcels, known as the Norfolk-Crandall woodlands, be made part of the preserve, according to a July 19 letter to the town board from its chairman, Richard Whalen.

The recommendation follows a January letter from residents of the neighborhood seeking the designation. That request, in turn, followed a summer 2021 uproar among neighbors after the town board identified the woodlands as the best option to site a 180-foot monopole that would house emergency and personal wireless communications equipment, part of an upgrade of the town’s emergency communications infrastructure.

Generations of adults and children have used the woodlands informally as a park. Residents were also concerned about the safety and value of their properties should such an installation be sited in the middle of their neighborhood.

Ultimately, a portion of Camp Blue Bay on Flaggy Hole Road, owned by the Girl Scouts of Nassau County, was determined as a site for the tower, though it has yet to be installed. A temporary “cell on wheels” at Gann Road in the hamlet will remain until the permanent emergency communications tower is designed and constructed.

“The committee is mindful of the town board’s concerns that nature preserve designation will limit the town’s inventory of non-park land available for other uses,” Mr. Whalen wrote. “However, the Norfolk-Crandall property meets the criteria for a town nature preserve on the basis of wildlife habitat. It is also important to the community. Finally, it is unsuitable for non-park use.”

The committee’s conclusion contrasts with one made in June by the directors of the town’s Planning and Natural Resources Departments. In their June 7 letter, Jeremy Samuelson and Kim Shaw wrote to the board, “The nature preserve designation is the most restrictive form of land protection within the town.” Should the woodlands be so designated, the outcome would be to “significantly limit or eliminate many of the active uses that are currently taking place on these properties. Of immediate concern would be the need to expressly prohibit exactly the uses described by community members as assets to the neighborhood: sledding, bike ramps, fort building, a rope swing, etc.”

Further, they wrote, nature preserve status “would prohibit nearly all alternative uses that current or future neighborhood residents may hope to benefit from. For example, any future use as a playground, community garden, or active recreation area would all be prohibited under a nature preserve designation.” Instead, the department heads suggested an open space or parkland designation for the site.

“I think the best use of the property is exactly the use in place today and that neighbors have described as the type of things they would like to preserve,” Mr. Samuelson said on Monday. “For better or for worse, some of those do not fit neatly under the heading ‘nature preserve.’ “

As an example, he said that residents, years from now, may decide that a community garden is most appropriate for the site. “If we decide this is a nature preserve, we would be precluding them from doing that. I’m not sure that’s the best answer.” The woodlands should be protected, he said, “but the type of uses they have described wanting to preserve are not the type of uses that align with a nature preserve.”

He stressed that his role, like that of the Nature Preserve Committee, is advisory. “The decision lies with the town board itself,” he said.

Mashashimuet Park's History and Future
A Conference for Young People to Create Solutions
Get Outside, Get Moving
END_OF_DOCUMENT_TOKEN_TO_BE_REPLACED