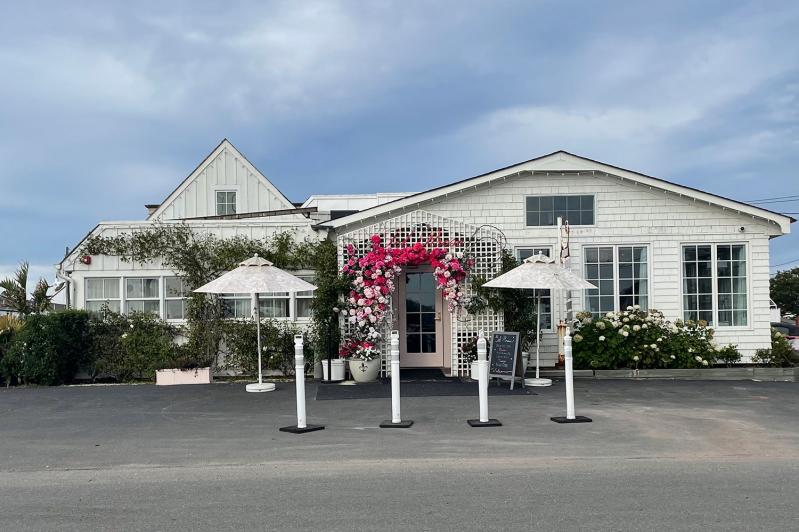 The East Hampton Town Board voted to take legal action to compel Sel Rrose, pictured, and tt’s, both in Montauk, to comply with occupancy limits after multiple allegations of overcrowding and other code violations.
Jane Bimson
By Christopher Walsh

Citing what it described as persistent overcrowding and other violations at two Montauk restaurants, tt’s and Sel Rrose, East Hampton Town is seeking an injunction in New York State Supreme Court to compel both establishments to comply immediately with the town code.

“I would submit that such conditions create a very real threat to the health and safety of every member of the public that goes into those locations,” David McMaster, an assistant town attorney, told the town board last Thursday. “That necessitates injunctive relief now, not after the restaurants have had an opportunity to operate for another month at the expense of potential risk to public safety.”

Issuing appearance tickets, for which a return date in East Hampton Town Justice Court might come weeks later, would allow the problems to continue, the attorney said.

Over the strident objections of an attorney and several principals and staff of the establishments, the town board authorized the town attorney’s office to initiate legal action against “the appropriate parties” of both restaurants.

Since July 4, ordinance enforcement officers have observed numerous instances of overcrowding at tt’s, at 466 West Lake Drive, and Sel Rrose, at 4 South Elmwood Avenue, according to Mr. McMaster, who spoke in response to public comment by Brian Matthews, an attorney representing Sel Rrose. “We can’t really understand the reason why the town would adopt a resolution to initiate any kind of legal action,” Mr. Matthews told the board. The establishment had neither been issued appearance tickets nor been informed of violations, he said. There were no issues with overcrowding, nor instances of tables moved for dancing, he said.

Mr. McMaster countered that the maximum occupancy of tt’s is 74, but numerous allegations of violation of that limit have occurred. A representative from the fire marshal’s office observed approximately 132 people during a July 4 visit, he said, 102 on a July 8 visit, 86 on a July 15 visit, and 112 the following day. Repeated requests to schedule a fire safety inspection, Mr. McMaster said, had been ignored.

He did not have the statistics available, but Mr. McMaster said that the fire marshal alleged overcrowding, change of use, and a violation of site plan at Sel Rrose on July 4. Overcrowding and failure to adhere to site plan were alleged on July 9, and a July 17 visit brought allegations of overcrowding, change of use, a deficiency in fire safety equipment, and lack of a certificate of occupancy. At both restaurants, “such conditions create a threat to health and safety,” Mr. McMaster said.

Kristin Vincent, who owns Sel Rrose, disputed the allegations. “The fire marshal has been in there and he’s congratulated us on how well we’re doing,” she told the board. Allegations of overcrowding are false, she said. The resolution authorizing legal action “is completely a surprise to all of us.” William Hoff, the general manager, and Shawn Hewitt, the executive chef, also disputed the allegations and spoke against the resolution.

One of the owners of tt’s said that he was unaware of violations. The restaurant is a tenant of the Viking Fleet, and Orla Reville, an owner of the fleet of fishing and ferry boats, said that the allegations also came as a surprise to her. Nonetheless, “Viking Fleet is on board with any changes we need to make,” she said. While she wants to support local businesses, “I want everything to be safe.”

Mr. Matthews told the board that to take legal action against the restaurants is “unsettling and surprising.” But Supervisor Peter Van Scoyoc said that issuing summonses and seeking compliance have proven ineffective, given “alleged offenses for the same thing over and over, particularly overcrowding,” and called occupancy limits “an incredibly important thing to regulate,” given mass casualties that have resulted from fires at commercial establishments. “Lives are at stake,” he said.