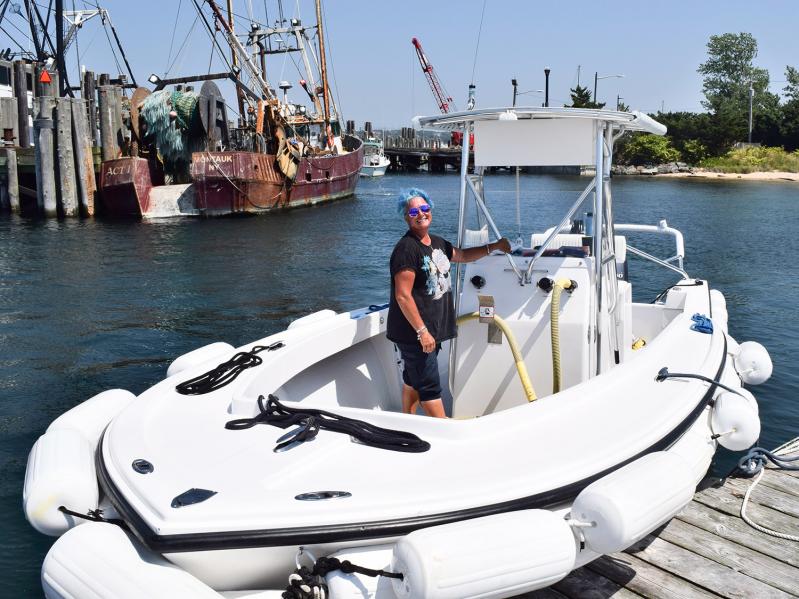 “It’s not a glamorous job,” Savannah Van Der Walt observed one day last week as the boat she was piloting glided toward a dense array of houseboats at Snug Harbor Marina on Lake Montauk. “But you see the thousands of gallons that we pump every week. If people dumped it here, we would have a disgusting mess, not to mention there are children swimming here, adults swimming here. There is a sailing school for small children and they do man-overboard things. We also have oyster farmers and clammers, and all of their shellfish is for human consumption. This is very, very important.”

The boat, recently acquired and put into operation this year, is owned by the East Hampton Town Trustees who, despite having no jurisdiction over Montauk’s waterways or beaches, operate a free, seven-days-a-week service from mid-May through Columbus Day, pumping out effluent from a veritable flotilla of vessels in Lake Montauk as well as in Three Mile Harbor, which is under trustee jurisdiction.

The discharge of sewage, treated or untreated, is prohibited in trustee waters. The entire Peconic Estuary is a designated no-discharge zone, and discharging of raw sewage directly into waters within three miles of land is illegal under federal law.

The trustees noticed a surge in boating in 2020, a likely byproduct of the Covid-19 pandemic, as people sought distance from crowds, even eschewing showers and other public facilities at

marinas in favor of those on board. The pandemic “caused a tripling in the amount of boating activities and people using their facilities,” Bill Taylor, a deputy clerk of the trustees and the town’s former waterways management supervisor, told his colleagues as the 2020 summer season wound down.

That volume of activity continued last year, according to Jim Grimes, the body’s other deputy clerk, but “seems to have abated this year,” he said this week.

The boats, acquired with the help of grants from the New York State Clean Vessel Assistance Program and the community preservation fund, a portion of which can be allocated to water quality improvement projects, launched shortly before Memorial Day weekend, after their captains met with Tim Treadwell, the town’s senior harbormaster. The trustees have no enforcement powers, but the pumpout boat operators “know who’s getting pumped out and who’s not getting pumped out,” Mr. Treadwell told the trustees at the time. “That’s not always as clear to us as it may be to them.” Receiving “intel from pumpout boat operators” is of great assistance to Marine Patrol, he said.

While the abundance of life in the waters surrounding the South Fork imply their cleanliness — “two massive seals live here,” Ms. Van Der Walt said of Montauk’s inlet — the 2021 report of the Eastern Long Island Blue Water Task Force lists several recreational sites where high bacteria levels are consistently measured. Part of the problem: “There are still people that dump here,” Ms. Van Der Walt said of boaters who tie up in Lake Montauk, “and it is totally, totally unacceptable.”

A native of South Africa, Ms. Van Der Walt, who is in her second year on the job, has spent much of her life on the water. The daughter of a king crab fisherman, she became a captain, delivering catamarans from the factory of an American boat builder there to customers around the world. In Montauk, she met her future husband while working as a mate on the Ebb Tide.

“She’s been a breath of fresh air,” Mr. Grimes said. Until a prior operator retired, “We didn’t realize how much that guy did. Not quite a season went by before things started to break down, issues started to arise. There was no lead operator, and we were short a guy who went out for medical issues.” Ms. Van Der Walt, he said, “kept it together.”

On a hot day last week, she showed a visitor her schedule book of vessels emptied of effluent, page after page filled with marina and vessel names, from a modest houseboat at Snug Harbor to a massive yacht, with an 800-gallon sanitation system, at the Montauk Lake Club. “I can only do 400 [gallons] in my boat, so I have to go back” to the municipal marina at Star Island, where effluent is transferred to a holding tank, “offload, and come back.”

Tying up alongside another houseboat at Snug Harbor, Ms. Van Der Walt, pulling a thick hose, climbed aboard and shimmied under railings to connect it to the vessel’s holding tank. From the trustee boat, the pump is switched on and the vessel’s marine sanitation device emptied. At each stop, she leaves a handwritten Post-It note by the tank indicating that it has been emptied.

Many of the boats serviced are on a weekly schedule. Others contact the pumpout boat by marine radio (VHF channel 73) or phone (631-644-7162). The harbormaster’s office at Gann Road in Springs has a self-serve pumpout facility, as does the Star Island municipal marina. “Every marina manager has the VHF and a cellphone,” Ms. Van Der Walt said. “Anybody can call us now and we’ll go pump the boat. When they call me, I just want to know the vessel name and slip number. I go directly to them and we pump them out.” Marina managers “will do everything they can to help get pumpouts done.”

Bob Fallon captains the trustee pumpout boat in Three Mile Harbor. Travis Wallace, a Montauk native, is in his first year on the job, relieving Ms. Van Der Walt one day per week in Montauk and Mr. Fallon two days per week in Three Mile Harbor. “I love it, it’s the best,” he said of the job. He also works at the Montauk Marine Basin and has a clamming license, “so I’m always on the lookout for people discharging, because it’s disgusting, it’s really bad for the clams and mussels. It’s really dangerous, discharging into the water.”

Those using the trustees’ free service “are always very thankful,” Mr. Wallace said. “I personally think it’s important because there’s the three-mile marker where people are allowed to pump out offshore. It’s nice when they come in here and get pumped out — it’s cleaner offshore now, and it’s cleaner in here.”

“I really believe in the project,” Ms. Van Der Walt said. “I’m really happy for the trustees doing this. I’m extremely passionate about this, and I get so furious if hear somebody dumps. There’s absolutely no reason for them to.”

“People need to ‘pump and notdump,’ ” she said.