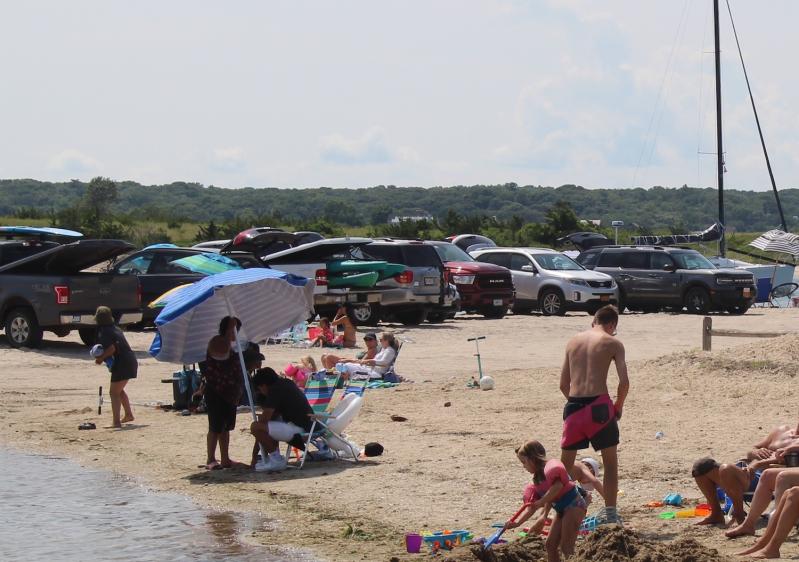 Vehicles lined up at the water's edge at the beach at Maidstone Park in Springs.
Durell Godfrey
By Christopher Walsh

The East Hampton Town Board will schedule a public hearing for early next month on proposed amendments to town code to reflect the changed status of the 4,000-foot stretch of Napeague ocean beach commonly known as Truck Beach.

After a legal challenge that started in 2009, homeowners associations were successful in having a New York State Supreme Court judge determine that the deeds to their properties extend to the mean high water mark of the ocean beach. Consequently, Justice Paul Baisley Jr. ruled last year, residents have no inherent right to drive and park vehicles there.

When Justice Baisley held the town and town trustees in contempt last month, levying a $239,000 fine and ordering them to pay the plaintiffs’ legal and associated fees, he also said that all town beach-driving permits issued since February 2021 must be revoked.

Revisions to the code pertaining to beaches “are really driven by the recent court orders and contempt charges the town received,” Supervisor Peter Van Scoyoc said on Tuesday. While the chapter pertaining to beaches “did not purport to authorize driving on private property, the law did not expressly prohibit driving on private property.” The changes to the code, he said, are intended to “make it very clear . . . that our beach driving permits do not authorize vehicles on privately-owned beaches, or private property, period.”

Nancy Marshall, an assistant town attorney, said that the changes will clarify that trustee-owned beaches are included, where applicable, throughout the code chapter. (The town and trustees jointly own and manage certain beaches.) Under the proposed changes to the section on applicability, the sentence “The provisions of this local law shall not apply to privately-owned properties” will be added.

The definition of “beach” will be amended to add the wording “provided however, that such area is owned or controlled by the town and/or trustees. In no event shall the definition of beach as set forth herein be deemed to refer to any privately owned properties, regardless of whether the same otherwise meets the definition herein.”

A notice for the public hearing will be issued at today’s meeting of the town board. The hearing will happen on Aug. 4, Mr. Van Scoyoc said.

Because the town and trustees manage beaches under a joint agreement, the latter body would also have to pass a resolution authorizing the changes. Francis Bock, clerk of the trustees, said on Tuesday that the trustees will discuss the proposed changes at their meeting on Monday.

With respect to beach driving permits, Mr. Van Scoyoc said after the meeting that “We’ll be following the court’s ruling, which requires revocation and reissue. We’re adding explicit language, although any reasonable person can read the existing law, which clearly doesn't purport to allow driving on private property. We are changing it to explicitly make that clear.”

Town beaches are defined as all beaches within the town’s boundaries, exclusive of those located within the incorporated villages of East Hampton and Sag Harbor.