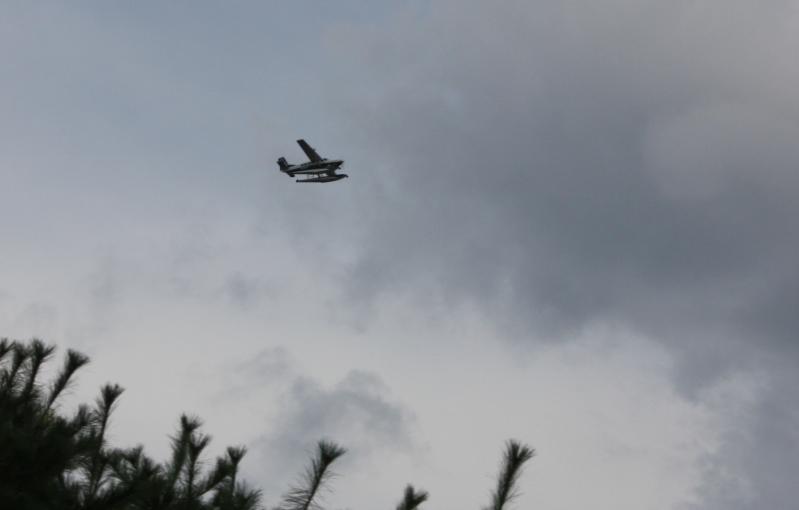 The company had suspended flights to and from Sag Harbor last Thursday when the village complained about Blade’s advertising. The campaign, described by Mayor James Larocca as “very exaggerated and misleading,” depicted six passengers boarding a seaplane that departs from the East River. They are taking pictures of one another in the cabin before a brief drone shot of Long Wharf in Sag Harbor cuts to a floating dock out in the bay. A crisp tender transports them to Long Wharf, where a woman hands them their luggage before they hop in their ride, a retro Ford Bronco.

The advertisement closed with the words “Zero to Weekend in 35 minutes — Seaplane between Manhattan and Sag Harbor” with the iconic Long Wharf windmill just behind. Before getting pulled, the ad had close to 1,000 views on YouTube.

The ride costs $895 per passenger.

“They are going to apologize for all the excess, clarify there will be no takeoffs or landings on Long Wharf, and that they’re only operating in state-owned waters,” Mr. Larocca said.

Blade removed all online, social media, and print advertising about service to Sag Harbor after the village lodged its complaints last week, and “will publish a public apology to the community for the upset their ad campaign created that referenced launching . . . helicopters, seaplanes” into and out of Long Wharf, according to the mayor.

Aidan Corish, a village trustee and pilot, also noticed that Blade’s website showed it switching from a private charter service to a scheduled airline service. “When a service is on a fixed schedule, it is subject to a different protocol in the world of aviation regulation,” said Mr. Larocca. This prompted the village to lodge an additional complaint with the Federal Aviation Administration.

Going forward, Blade will be following “new protocols,” the mayor said. Blade has also agreed to confine the volume of seaplane traffic this year to 2021 levels. The company said that if the volume gets within 5 percent of that level, it will let the village know, according to the mayor.

“After working constructively with the mayor’s office to address community concerns, we are resuming service and providing real-time information regarding our operations to the village, which enables us to prevent any issues before they may arise,” said Rob Wiesenthal, the chief executive officer of Blade Urban Air Mobility. “We look forward to this very collaborative relationship continuing.”

In years past, Blade landed its seaplanes without the benefit of a dock. A boat tender picked up passengers directly from the plane. Now, however, a dock anchored a few hundred yards off Havens Beach receives the seaplane customers. Kenneth Deeg, who owns Sag Harbor Launch and Moorings, provides launch services to Blade passengers from the dock to Long Wharf, a trip that takes approximately eight minutes.

With East Hampton Town’s attempt — now on hold — to privatize its airport and limit the number of trips aircraft operators can make into and out of it each day, Blade had said earlier this year that it would divert 60 percent of flights to other landing areas including in Gardiner’s Bay and Peconic Bay, Montauk Airport, and locations in Southampton, Mattituck, and Westhampton Beach, along with ocean landing sites.

Seaplane landings are banned in most waters under East Hampton Town jurisdiction.

Sag Harbor Village has jurisdiction over access to the harbor via the launch. Blade does not own a launch. Without a launch service, it cannot take its customers to Long Wharf.

“Ken will now have the ability to maintain and regulate the float, and that gives us as close to any direct control we can have over the operation,” said Mayor Larocca.

“We’re licensing the last mile of this trip, and I have a big issue with that,” Mr. Corish said by phone last week. “There’s nothing in it for the village other than disturbance and discombobulation.” He added that “Not one of these companies has any shore personnel.”

Neither Blade nor Tailwind, another seaplane company, has come to the village board, he said. Meanwhile, the Peconic Jitney, which is proposing a passenger ferry service between Long Wharf and Greenport, has made multiple presentations, most recently to the Harbor Committee on May 26.

The village board was worried that the portrayal of Long Wharf in Blade’s original advertisements would feed into the ongoing debate about the use of Long Wharf as a destination for the Peconic Jitney. “The Long Wharf is one of our most important assets,” said Mayor Larocca, and to have it misrepresented was problematic for the village.

Mr. Corish wants Sag Harbor to ban any seaplane taxiing in village waters, he wants the floating dock off of Havens Beach to be removed, and he wants the Sag Harbor Launch service to stop picking up seaplane passengers.

“The idea that some of this advertising was focused on trying to put pressure on the Town of East Hampton was a misdirected effort, to say the least,” said Mr. Larocca. Without the excess of the advertising, he said, the whole controversy might never had erupted.