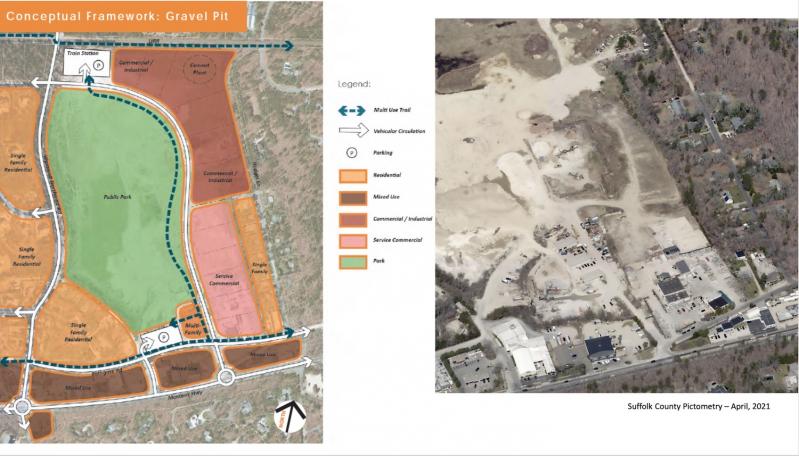 A Wainscott Hamlet Study called for a very different use of the former sand pit than the one proposed.
Dodson and Flinker
By Christopher Gangemi

Interested parties and others waiting for the East Hampton Town Planning Board to accept or turn down the Wainscott Commercial Center’s draft environmental impact statement were left disappointed last week, as no vote was held.

But progress was made at the June 22 meeting. In December, when the applicants were last in front of the board, they left with a laundry list of 20 items deemed deficient on the D.E.I.S. Last week, the board agreed that after six months of work by Wainscott Commercial, the list had been narrowed to four.

Perhaps the biggest issue was the grading at the site, and how it might impact septic systems. A minimum of two feet of soil is required between the bottom of a septic ring and the groundwater below. Citing seasonal shifts to the water table, Ben Cancemi of FPM Group, an environmental consultant, told board members it wasn’t clear Wainscott Commercial could achieve that. More information was needed, he said.

The board also wanted more information about how stormwater discharges from the site might affect the flora and fauna of Georgica Pond, how nitrogen levels might impact the groundwater, and the impact on traffic during construction.

The Wainscott Commercial Center is the name given to the former 70-acre Bistrian sand pit, just north of the Speedway gas station on Montauk Highway. It lies at the entrance to East Hampton Town, in one of the busier stretches of the highway, and only a few hundred feet away from the headwaters of Georgica Pond.

Wainscott Commercial proposes to subdivide the large parcel into 50 commercial lots, most just under one acre. An existing concrete plant would remain at the site, as would a masonry and tile supply yard.

The ramifications of such a large project in such a prominent location are obvious. In 2016, a Wainscott Hamlet Study called for a very different use of the land. The planning board is tasked not only with weighing the merits of the application on its own, but ensuring that it comply, as much as possible, with the town’s needs and the hamlet plan.

New York State’s Environmental Review Act addresses large development projects that might adversely impact their surroundings. Under SEQRA, developers are required to work with town planners to create a D.E.I.S., which is then presented to the public for comment.

A lawyer retained by the town specifically to advise on this project, Michael Stout, told board members they need not approve anything yet. They just needed “the tools to evaluate the project’s impacts,” he said, “such that when you get to the final E.I.S. stage you’ll have sufficient information in front of you, to evaluate whether or not the proposed mitigation is adequate or avoided to the extent it can be. You need not make those determinations now.”

The board talked through the SEQRA process, helping one another understand, often using analogies. Lou Cortese, a member, likened the D.E.I.S. to an audition. Sam Kramer, the board chairman, thought of it as setting a table.

“Whether you want to eat the meal or not, that’s a story down the road,” he said.

“We’re getting finer and finer and finer — nothing means that we’re saying, ‘go ahead with the project,’ “ said Ian Calder-Piedmonte. “We’re just making sure they’re not saying, we’re going to have a 50-lot subdivision, and there’s going to be two cars, all day long.”

After an hour and a half of listening to the board go one by one through the list of 20 items, David Eagan, a land use lawyer representing Wainscott Commercial, said, “We know what we need to do.”

The board will rewrite the resolution they had been prepared to vote on, paring it down to the four outstanding items, before their next meeting, on July 13. Mr. Kramer said they would probably vote on it then.