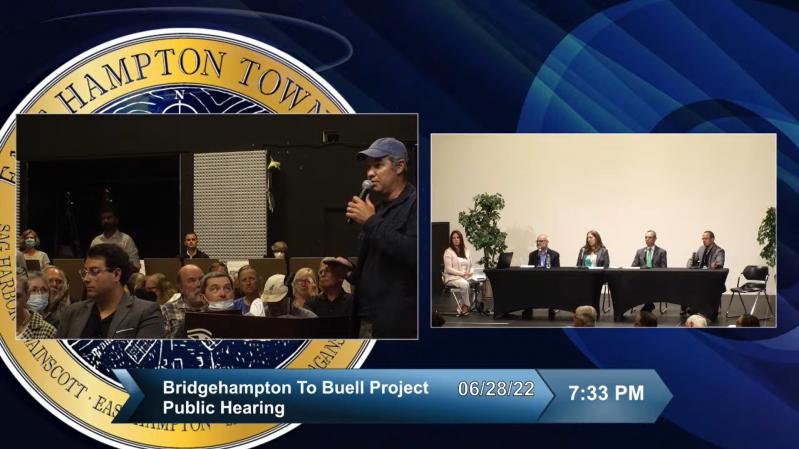 Not a single person at Tuesday night’s public hearing on PSEG-Long Island’s plan to run an underground transmission line through the Long Pond Greenbelt supported the idea. Many forcefully opposed it.

“We are going to fight you. We’re not going to stop,” said Shawn Sachs, adding that he was there to speak for his young daughters.

The proposed cable would run beneath existing high wires, which slice the greenbelt in two and currently connect two substations, one off the Bridgehampton-Sag Harbor Turnpike in Sag Harbor, the other off Buell Lane in East Hampton. The project would begin in 2024 and be completed by the summer of 2025.

Many in the audience urged PSEG to use an alternate route, mentioned in its Draft Environmental Impact Statement. That route would take the transmission cable south down the turnpike and then east under Montauk Highway, before heading north up Buell Lane. It would cost $84 million, according to PSEG — roughly double the cost of drilling through the greenbelt.

"The proposed project has significant advantages over the five alternatives studied," PSEG-Long Island said in an email on Thursday. "For example, the project would utilize the existing LIPA right-of-way which contains transmission towers, is the most economical, and horizontal directional drilling will be used to minimize disturbances to and protect sensitive natural resources. HDD is a common construction method utilized for underground cable placement.”

Critics brushed aside the cost to the utility, instead denouncing it for high charges to ratepayers.

PSEG, which is publicly traded, is one of the 10 largest electrical companies in the United States. According to its website, it had nearly $10 billion in revenue in 2020.

State Assemblyman Fred W. Thiele Jr., who represents this district, said the issue was personal for him and many in the community. “My introduction to nature really came from walking in the Long Pond Greenbelt with my father,” he said at the hearing.

“But in my role as an elected official, I’m mindful of the fact that between the State of New York, the County of Suffolk, the Town of Southampton, the Nature Conservancy, the Peconic Land Trust, literally tens of millions of dollars have been spent in public money to protect the resource that is the Long Pond Greenbelt.”

County Legislator Bridget Fleming was one among the many who questioned the need for the extra electricity. “The proposed action is claimed to be needed to support forecast electric load growth,” she said. “Year in and year out, we have seen from LIPA consistent patterns of dramatic projections of future load requirements that are subsequently reduced.”

Energy efficiencies, she said, are bringing down the average amount of electricity used by new houses. “At the county level alone, energy efficiency projects are making drastic reductions in need,” Ms. Fleming said. “What you are proposing here is going to have a dra matic, and I daresay unacceptable, impact to our natural environment, and it’s got to be rethought.”

Steve Storch of Water Mill, an organic farmer, agreed. “You’re talking about going in and digging into a place that has taken nature 15,000 years after the Ice Age to lay down and build,” he said. “For this extra electricity? Are you talking about serving the one percent? Because I don’t see any of them here speaking out for it.”

Like others, he also questioned the environmental impact. “Do you have any idea what happens when you directional-drill under a pond that’s connected to the groundwater?” he asked. “And you put this pipeline of wire under it? Is it going to make a leak, and drain these ponds? . . . These are questions that you can’t answer because you don’t know.”

“What will electromagnetic field interference do to underground habitat?” asked Frank Quevedo of the South Fork Natural History Museum. “The reptiles and amphibians of this particular preserve are glacial relics. They don’t easily hear noise and see things, but they react to vibration and electromagnetic fields.”

Many speakers were emotional. Barbara Borenstein, an ex-board member of Friends of the Long Pond Greenbelt, said those who had the most to lose were “those two little boys in the back room,” pointing to a room where people’s children were playing. “Please don’t do it just because you can,” she said to applause.

“This is not just about salamanders,” said Ken Dorph, who lives on Round Pond in Bridgehampton. The coastal pond environment is unique, he said, existing in the U.S. in only three places: “Cape Cod, the New Jersey Pine Barrens, and right here. That we would be considering the risk of damaging such a rare environment, to me is appalling.”

“The Long Pond Greenbelt is irreplaceable,” said Dai Dayton. Her organization, Friends of the Long Pond Greenbelt, which has over 400 members, has been advocating for 25 years on the greenbelt’s behalf. She said PSEG’s idea to use the Great Swamp, which “feeds the Long Pond Greenbelt,” and to clear nearly an acre of land to stage the machine that will shoot the drill directly under Long Pond and its surrounding wetlands, was ill advised. “There is no way that you can repair anything that goes wrong with this. And you cannot guarantee that something will not go wrong. So please consider alternative Number Three.”

“I have been a resident of the greenbelt for 25 years,” said Jay Schneider, speaking over Zoom. “I really don’t have much to add from what’s been said before, but I’d like you to take a look.”

With that, he stepped away from the screen and showed Lily Pond behind him, with the sun streaming through the trees. “This is the greenbelt,” he said. “This is one of the most beautiful places in the world. Leave it alone.” The room exploded in applause.

Comments on the D.E.I.S. can be submitted via email to [email protected] through July 12. An environmental attorney for the utility said it will provide written responses to all comments, as part of its final environmental impact statement, which will be prepared over the next couple of months.
__

Note: This article has been updated since it originally appeared in print.