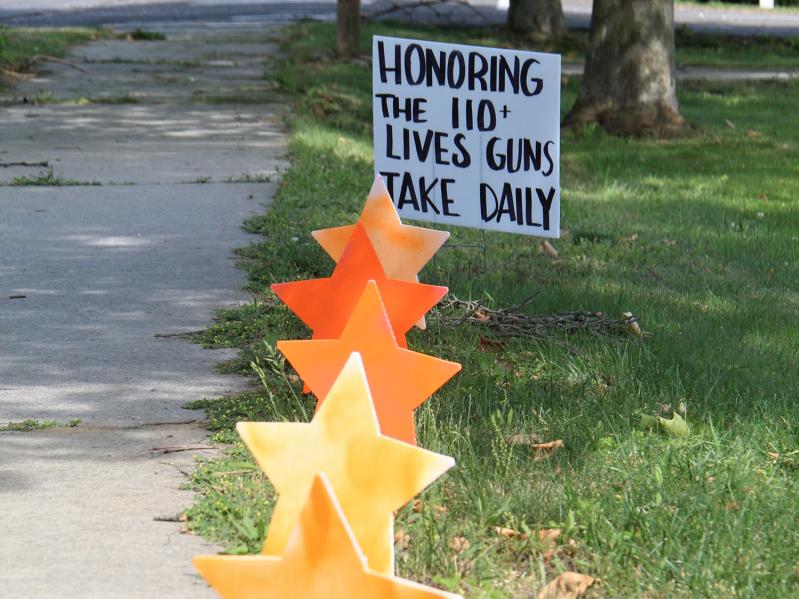 A row of stars alongside Montauk Highway by St. Michael’s Lutheran Church in Amagansett honors “the 110-plus lives” taken by guns every day.
Durell Godfrey
By Christopher Walsh

The Supreme Court of the United States overturned a 1913 New York State statute that sharply restricted the carrying of concealed firearms in public by requiring applicants for concealed-carry permits to demonstrate proper cause.

In its decision on New York State Rifle and Pistol Association v. Bruen, announced last Thursday, the court ruled that requiring applicants to demonstrate a special need for self-defense was unconstitutional. The vote was 6 to 3, the same margin by which the court, one day later, announced its decision overturning the 1973 Roe v. Wade decision that legalized abortion.

The decision came amid a spate of mass shootings in the country — there has been an average of more than one per day in 2022 — including the May 14 attack in which 10 people were murdered in a Buffalo supermarket and the attack, 10 days later, in Uvalde, Tex., in which 19 elementary schoolchildren and two teachers were killed.

Reaction was swift on both sides of the issue. Speaking last Thursday, Gov. Kathy Hochul called the ruling “frightful in its scope of how they are setting back this nation” and the ability to protect citizens “to the days of our founding fathers.” She called the timing of the decision “particularly painful” given recent mass shootings, and charged that the court is “politicized.”

The decision, she said, means that “you have no forewarning that someone can hide a weapon on them and go into our subways, go into our grocery stores” like the one in her hometown of Buffalo. The decision “isn’t just reckless, it’s reprehensible.”

Representative Lee Zeldin of New York’s First Congressional District, who won Tuesday’s primary election to become the Republican Party’s nominee for governor, saw the decision differently. In a statement last Thursday, he said that the court “ruled in defense of the constitutional rights of law-abiding New Yorkers who have been under attack for too long.” He said that he had signed on to an amicus brief in support of the case, and that the governor “better not make her next move on this yet another assault on law-abiding New Yorkers.”

Also last Thursday, the governor, who easily held off primary election challengers and will face Mr. Zeldin in the Nov. 8 election, convened the mayors of the state’s six largest cities to discuss policy options under consideration. On Friday, she announced a special session of the Legislature that is to start today to pass new gun-safety legislation.

“The Supreme Court’s reckless and reprehensible decision to strike down New York’s century-old concealed-carry law puts lives at risk here in New York,” she said in a statement. “Since the decision was released, I have been working around the clock with our partners in the Legislature to craft gun-safety legislation in response to this ruling that will protect New Yorkers.”

Mr. Thiele pledged to return to Albany for the special session.

The state’s “red flag” law, which took effect in 2019, prevents those showing signs of being a threat to themselves or others from purchasing or possessing any kind of firearm. On May 18, in the wake of the mass shooting in Buffalo, the governor signed an executive order to require state police to file for an extreme risk protection order whenever they have probable cause to believe an individual represents a threat.

Anna Skrenta, a volunteer with Moms Demand Action for Gun Sense in America and vice chairwoman of the East Hampton Democratic Committee, said that while she was not surprised by the court’s decision, “it’s obviously a dangerous ruling.” It is “a travesty for that ruling to come down in the aftermath of the massacres at Uvalde and Buffalo,” she said. “To be taking steps to make us less safe is just irresponsible and a shame.” The public’s faith in the three branches of government is “so low, and it’s so dangerous.”

The court’s decision on the state’s concealed-carry law and on Roe v. Wade are both out of step with the country, she said. “Polling shows us that the majority of Americans support common-sense gun laws, and that includes gun owners. Also, the majority of Americans are opposed to overturning Roe. In that way, the numbers are on our side, although I think it will energize and motivate both sides.”

“We humans lose our temper often,” he said. “If one loses their temper and they are armed with a gun, they will not hesitate in making use of that gun. This is no longer the Wild Wild West; we are a civilized country with the best Constitution on earth.” Adherence to the vague wording of the Second Amendment, written and ratified in the 18th century, “makes no sense,” he said. “We have to do better.”

A voice mail message and email to the Maidstone Gun Club in Wainscott had not been returned as of yesterday. The Southampton Pistol and Rifle Club also did not reply to an email. The greeting on its voice mail machine said that “any message left here will not be responded to.”

A person who answered a call to the telephone number listed at a Montauk Highway, East Hampton, store that sells firearms and offers firearms training declined to give his name or describe the business. “I don’t have a reaction for you at this time,” he said on Tuesday. “It’s too unclear as to where the chips will all fall.”

The Supreme Court’s decision also came on the same day that the United States Senate took its first action on gun violence in almost 30 years, and two days later President Biden signed the Bipartisan Safer Communities Act into law. It expands background checks for those between 18 and 21, incentivizes states to enact red flag laws that allow police to temporarily confiscate guns from those deemed a danger to themselves or others, and earmarks money to fund mental health and school safety initiatives. Fifteen Republicans and all 50 Democrats in the Senate voted in favor of the bill.

“While the bill does not take every action we need,” Governor Hochul said in a statement, “it is an important step in the right direction.”

An important, if small, step, Ms. Skrenta said, “but it is hard to celebrate that in the face of the Supreme Court ruling. One very positive element of that is it does more to protect victims of domestic violence, and provides resources for mental health, but it’s the tiniest of baby steps, and I am not going to celebrate or thank Republicans for taking those baby steps. It’s the very least they can do.”