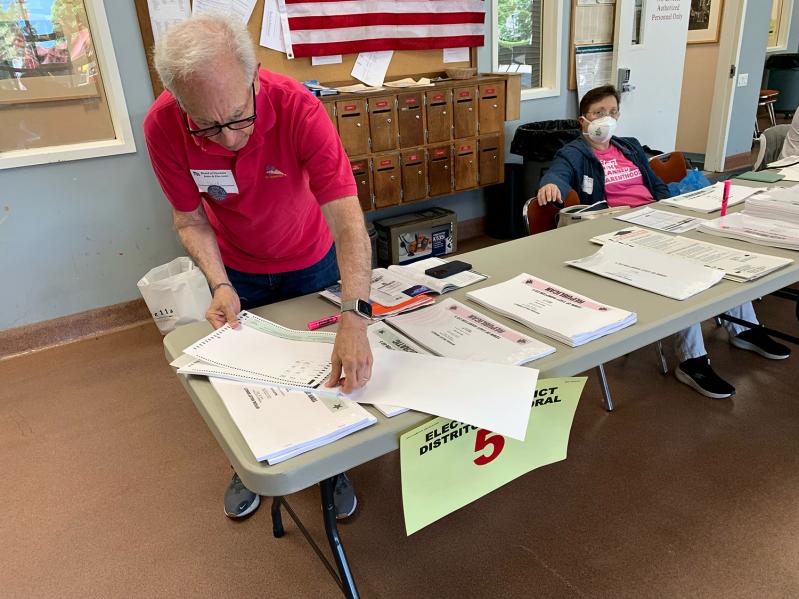 Voters registered with the Democratic and Republican Parties went to the polls to select candidates for governor and lieutenant governor on Tuesday, and Suffolk Republicans also chose a candidate for county clerk.
Durell Godfrey
By Christopher Walsh

On the Republican side, Representative Lee Zeldin of New York’s First Congressional District is the winner in a four-way race for the party’s nominee for governor. Mr. Zeldin, who is from Shirley, bested candidates including Andrew Giuliani, a former Trump administration official and the son of former New York City Mayor Rudolph W. Giuliani.

Ms. Hochul and Mr. Zeldin will face off in the general election, one that is widely thought to heavily favor Republicans, as all 435 seats in the United States House of Representatives and 34 of 100 Senate seats will be contested in a deeply divided nation. But Mr. Zeldin’s enduring fealty to former President Trump — the congressman voted to overturn the results of the 2020 elec tion in two states — and his stance on abortion and firearms are unlikely to help his candidacy in a statewide race in which registered Democrats outnumber Republicans by a more than 2-to-1 margin. A Republican has not been elected governor of New York in 20 years, and Mr. Trump lost to President Biden in the state by more than 20 percentage points in 2020.

Unofficial results put Ms. Hochul comfortably ahead of Jumaane Williams, the New York City public advocate, and Representative Tom Suozzi of the State’s Third Congressional District. With 12,404 of 12,804 districts reporting as of yesterday morning, Ms. Hochul had 66.5 percent of the vote to Mr. Williams’s 19 percent and Mr. Suozzi’s 12.8 percent.

Mr. Zeldin bested his challengers Mr. Giuliani, Rob Astorino, a former Westchester County executive and his party�s 2014 nominee for governor, and Harry Wilson, a businessman. With 12,019 of 12,804 districts reporting, the fourth-term congressman had 43.5 percent of the vote to Mr. Giuliani’s 22.7 percent, Mr. Astorino’s 17.8 percent, and Mr. Wilson’s 14.7 percent.

In Suffolk County, Mr. Zeldin won more than three-quarters of Republican votes cast, according to the county board of elections’ unofficial tally. With 1,051 of 1,054 districts reporting, he had won 75.9 percent of the vote. Ms. Hochul won 68.15 percent of the vote in Suffolk. Far more Republicans than Democrats voted in the primary in Suffolk.

In Nassau County, according to the State Board of Elections, each of the nominees ran up a similarly lopsided margin of victory. Ms. Hochul had won 61.2 percent of the Democratic vote, and Mr. Zeldin won 57.4 percent of that county’s Republican vote. Mr. Suozzi fared better in Nassau, winning 29.9 percent.

In the Democratic primary for lieutenant governor, Antonio Delgado, the incumbent, is the winner, with unofficial results giving him 51.5 percent of the vote. Diana Reyna, Mr. Suozzi’s running mate, had 25.45 percent, and Ana Maria Archila, Mr. Williams’s running mate, had 22.75 percent.

The Republican primary ballot in Suffolk also included candidates for county clerk. In that race, Vincent Puleo defeated the incumbent, Judith Pascale, 60.3 percent to 39.6 percent, according to the county board of elections.

Because of a protracted dispute over the redrawing of legislative districts following the 2020 census, New Yorkers will vote for candidates for United States Congress and State Senate on Aug. 23.

In prepared remarks at a victory celebration on Tuesday night, the governor was direct in portraying her opponent in the Nov. 8 election. “We cannot and will not allow the extreme right to roll back the progress we’ve made, whether it’s a Trump cheerleader running for governor of our state, or a right-wing majority sitting on the highest court in the land.”

Jerrel Harvey, the governor’s campaign communications director, was equally blunt in a statement issued on Tuesday night. “Tonight, the New York Republican Party nominated far-right extremist Lee Zeldin,” he said. Mr. Zeldin “voted to overturn the 2020 election, repeatedly supported abortion bans, and would make our state less safe by rolling back commonsense gun safety laws. He is so far out of the mainstream it’s hard to believe that he’s even a New Yorker — much less one that wants to represent all of us as governor.”

“I commend all of the candidates in this primary for running a hard fought race and look forward to working together to fire Kathy Hochul and save our state,” Mr. Zeldin said in remarks to supporters. “This is a rescue mission to end the attacks on our safety, wallets, freedoms, and kids’ education. Losing is not an option.”

“Kathy Hochul has now been warned that the people of New York are coming for her job at the ballot box this November,” he said. “We will secure our streets. We will make New York more affordable again. We will fight for our kids and our schools. We will fight to preserve freedom for our families to stay here and be strong. We are all in, and will take absolutely nothing for granted in all 62 counties of our state. No county is too large. No county is too small. Kathy Hochul, we are coming for your job.”

“Today with the victory of Lee Zeldin, New York State has begun on a path to government that will be responsive to all communities of New York State as opposed to a radical fringe in New York City,” said Manny Vilar, chairman of the East Hampton Town Republican Committee. “The more you learn about Lee Zeldin, voters will find that Lee and lieutenant governor candidate Alison Esposito are more in line with the values of everyday New Yorkers, whether they are traditional Democrats, Republicans, or independent voters.”

“New York State has suffered greatly under the corrupt administrations of [former Governor] Eliot Spitzer, Andrew Cuomo, and Kathy Hochul,” he said. “From sexual predation on women to the death of over 15,000 seniors, the scandals are far too many and have ruined too many lives and families while Kathy Hochul, as lieutenant governor, said nothing and, worse yet, did nothing.”

Jeremiah Mulligan, chairman of the East Hampton Democratic Committee, said that “questions have been raised about” the governor’s “light campaigning in the primary, but I agree with her approach. The country is awash in politics with the U.S. Supreme Court decisions on guns, abortion, and religion as well as the Jan. 6 Select Committee hearings including Tuesday’s blockbuster special session highlighting the Trump Administration’s active involvement in the Jan. 6 riot and attempted coup.” The governor’s general election campaign “will start after the August primary,” he said, “and with Zeldin’s complete commitment to Trump, he will have a steep uphill climb.”

Voters, he said, “are now focused on the disastrous Trump presidency which Zeldin totally supported and still does; the Supreme Court making women second-class citizens, and allowing religion to become part of politics.”