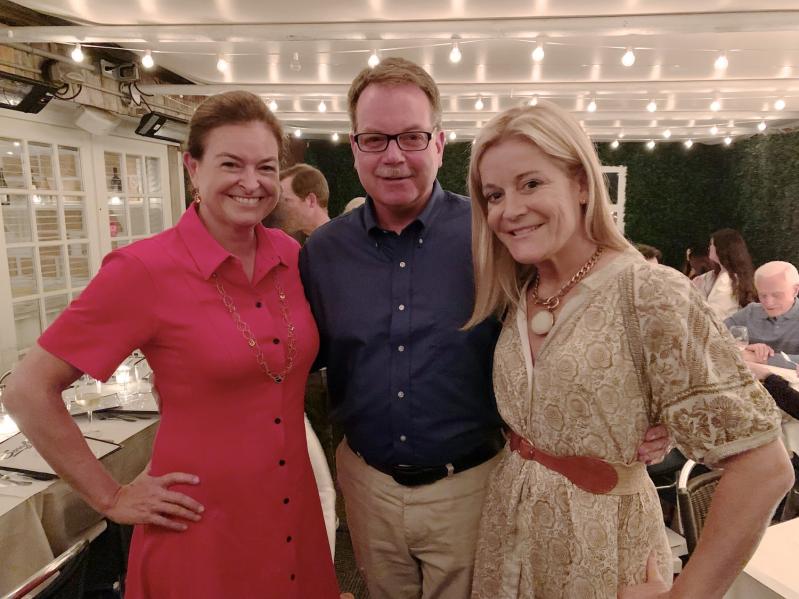 Before their victories, Carrie Doyle, left, and Sarah Amaden, right, looked confident as they waited for East Hampton Village polls to close with Mayor Jerry Larsen and other supporters at Serafina on North Main Street.
Durell Godfrey
By Christopher Gangemi

Voters handed East Hampton Village Mayor Jerry Larsen and his NewTown Party a big victory at the polls Tuesday, electing two political neophytes, Sarah Amaden and Carrie Doyle, who he handpicked, to four-year terms as village trustees over the incumbent Arthur Graham, who ran on the Fish Hooks Party.

The NewTown Party started celebrating early, with a pre-vote-count party at Serafina, just across from the Emergency Services Building, where the votes were tallied. At the party, Mayor Larsen predicted a 3-to-1 margin of victory.

In the firehouse, the scene was far more sedate. Under fluorescent lights, and the watchful eyes of the village attorney, Vincent Messina, the poll watcher John DiCioccio, and Mr. Graham, a team of four women at two foldout tables opened absentee ballots and counted votes. Pam Bennett, the village clerk, who spent many minutes opening the nearly 300 absentee ballots, said turnout was strong.

Ms. Amaden, a newcomer to politics and village government, has sent three children through the East Hampton public school system and her husband, James Amaden, is a volunteer fireman. Her message of creating a more inclusive community resonated with East Hampton Village voters. After the votes were counted, she said she was "humbled and honored" by her victory.

"I'm excited to serve our community. I'm also really grateful to Tiger Graham, who is such a stand-up neighbor, friend, and opponent," she said.

Ms. Doyle, the only candidate who splits time between East Hampton and New York City, has served on the village's zoning board of appeals since the summer of 2021. During the campaign, she said she’d push to strengthen the downtown area and help create a more vibrant village, and called for a master plan. She will vacate her post on the Z.B.A. and the board can choose to appoint a new member by July 1.

Mr. Graham, the sole candidate on the Fish Hooks line, ran almost exclusively on the idea of more transparent decision-making at Village Hall. He criticized the lack of work sessions in Mayor Larsen’s administration and cautioned that without a trustee from another party on the board, debate and discussion at village board meetings would disappear.

"That's the way the village voted. The village is going to get what it deserves," said Mr. Graham once the votes were counted.

"Jerry Larsen has a machine. And the machine turned out for him tonight and that's what it is," he said. "This is going to make the next election in two years more important."

Mr. Graham has served as a village trustee since 2017.

With all five village trustee posts now held by NewTown party candidates, Mayor Larsen was ebullient. "It's a great night," he said. "The village residents have spoken, and they agree with what we're doing. I also want to thank Tiger for being a gentleman and I thank him for his service."

Mr. Graham for his part, did not rule out staying involved in village government.

"I'm going to stay involved with the village to the extent that Jerry wants me involved. I love this village," he said.