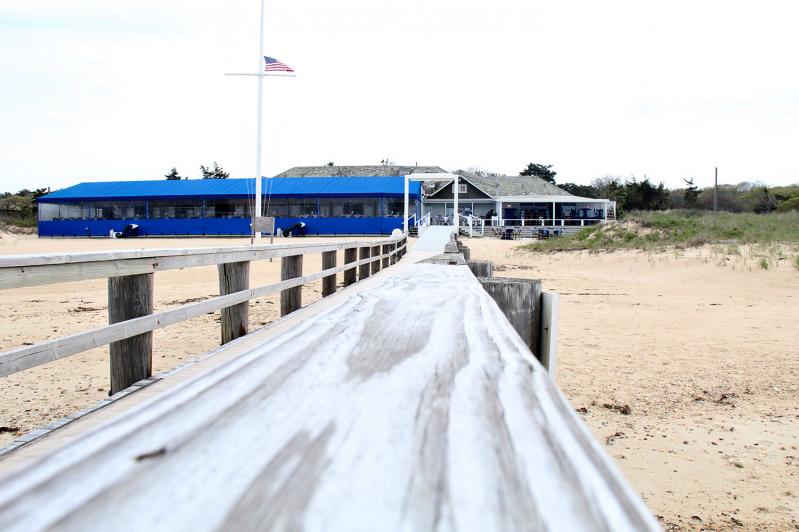 The Devon Yacht Club is taking East Hampton Town’s Coastal Assessment Resiliency Plan seriously, with a goal of moving all of its buildings landward.
Durell Godfrey
By Christopher Gangemi

Citing the threat of erosion, the Devon Yacht Club, a private club and marina founded in 1908 on a 13-acre parcel of land along Gardiner’s Bay in Amagansett, is seeking to move to higher ground.

At the May 18 East Hampton Town Planning Board meeting, the club presented a preliminary plan for the move, which board members greeted favorably.

“The board of governors and the membership have realized that the aging facility should be upgraded to make it more flood-resilient to ensure longevity, while simultaneously improving the club’s efforts at the protection of the natural resources present on the property,” the application reads. “It is specifically noted that the improvements that are proposed at this site will not increase the size, membership, or the capacity of the Devon Yacht Club.”

The current buildings would be demolished, and the clubhouse, bath house, and sailing center would be moved away from the water. A residence used as staff housing would also be moved. Minor aspects of the plan include relocating a workshop and reconfiguring the tennis courts.

The town’s new Coastal Assessment and Resiliency Plan (CARP), released late in April, warns of the potential for East Hampton to be transformed “into a series of islands with permanent submergence of low-lying areas, as early as 2070.” Financially, this could be crippling: “Losses associated with property damage will increase significantly in the future due to sea level rise and increased flood risks.”

It would be years before some aspects of CARP, such as the implementation of flood barriers and levees, would happen. Right away, though, the report recommends starting “shoreline setback review and regulation” and establishing a “Design Flood Elevation, that incorporates sea level rise.”

“They’re looking to make sure this club is going to be around for the next hundred years,” said Richard Warren, a land-use planner representing Devon before the board.

The current staff housing is located close to wetlands, which is problematic. Worse, according to Marco Wu, a town planner, the building is “serviced by a cesspool located in the wetlands.” The good news is that the club proposes to locate a low-nitrogen on-site waste treatment system in the optimal location, given the environmental constraints on the property.”

“How many employees reside in the residence?” asked Samuel Kramer, the planning board chairman.

“About 18,” said Mr. Warren. Its sanitary system “has been there forever,” he said.

“This is a pretty ambitious project on a difficult site,” he added. “We’re looking at phasing the construction.” To start with, the tennis courts will be removed. The sanitary, clubhouse, and parking reconfiguration would also be done in Phase One.

Devon will restore the dunes as much as possible, Mr. Warren said, as the buildings are moved away.

“This is the beginning of the process for us, we know we have a long way to go,” he said. Approvals from the Town Zoning Board of Appeals, the Suffolk County Health Department, and the State Department of Environmental Conservation will all be necessary. The move will likely take a year and a half or two years to complete.

“The East Hampton Star has characterized the projected sea level rise as ‘ominous,’ “ said Michael Hansen, a board member. He asked if there was a history of flooding on the property.

“One thing we are concerned about is sea level rise,” Mr. Warren replied. “They haven’t had incidents to date of significant storm damage.” He said the new buildings would be on pylons.

All the board members agreed that taking the cesspool out of the wetlands was key to the project and a huge improvement.

“It’s a hugely ambitious project, needless to say,” said Ed Krug, a member. “You’re rebuilding the club. I thank you for taking the issue of rising sea level and coastal resiliency seriously.”

Mr. Kramer, citing other big projects in town, was concerned about the construction debris. “In terms of community impact, I would like to make sure the hauling out of the former buildings . . . is not overwhelming the local streets,” he said.

But he was pleased with the detail shown in the preliminary plan. “It looks like you have a very comprehensive, forward-thinking way of dealing with this,” he said.

A Conference for Young People to Create Solutions
Get Outside, Get Moving
Two Traditions, One Fair in Springs
END_OF_DOCUMENT_TOKEN_TO_BE_REPLACED