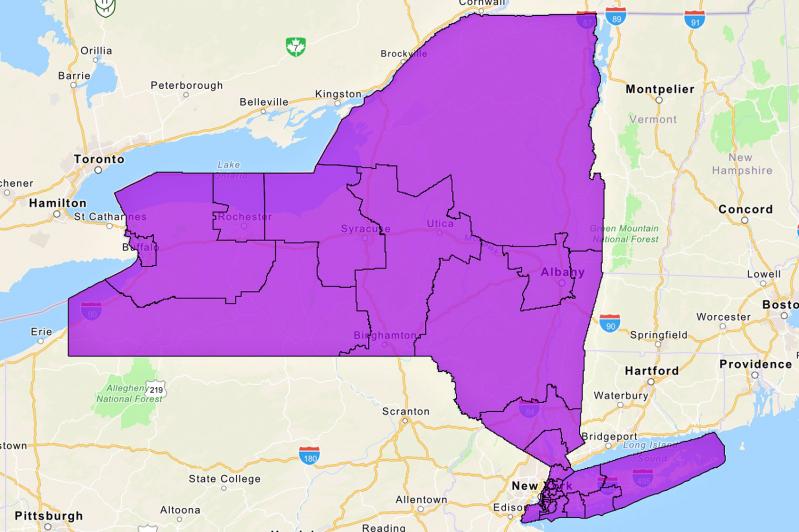 New York State’s existing congressional and State Senate district maps will be redrawn by a neutral expert.
New York State Board of Elections
By Christopher Walsh

The ruling has significant implications for the First Congressional District on Long Island, where redrawn boundaries made a Democratic victory more likely after four consecutive electoral victories by Representative Lee Zeldin, a Republican who is running for governor of New York.

But the commission, comprising an equal number of Democrats and Republicans, could not agree on a new map, and the matter was relegated to the Legislature, where Democrats hold a majority in the Assembly and Senate.

Republicans accused the Legislature of gerrymandering, the manipulation of electoral boundaries to favor one party over another practiced in many states and by both major parties. On March 31, a Supreme Court Justice in Steuben County declared all of the redrawn legislative district maps unconstitutional, blocking their use. Last month, an Appellate Division of State Supreme Court issued a stay, temporarily keeping in place the district maps for the upcoming primary and general elections.

But the Court of Appeals sided with the Republican complainants in a split decision announced on April 27.

Following the stalemate within the Independent Redistricting Commission, “the Legislature responded by creating and enacting maps in a nontransparent manner controlled exclusively by the dominant political party,” Chief Judge Janet DiFiore wrote. Having determined that the Legislature failed to follow constitutional procedure and instead drew district lines with “an unconstitutional partisan intent,” the court declared the congressional and Senate maps void. “As a result, judicial oversight is required to facilitate the expeditious creation of constitutionally conforming maps for use in the 2022 election and to safeguard the constitutionally protected right of New Yorkers to a fair election.”

“Prompt judicial intervention is both necessary and appropriate to guarantee the people’s right to a free and fair election,” Judge DiFiore wrote. “Although it will likely be necessary to move the congressional and Senate primary elections to August, New York routinely held a bifurcated primary until recently, with some primaries occurring as late as September.”

Under the redrawn maps, the First Congressional District would have expanded westward to encompass more Democratic-leaning territory and lose the Republican-heavy western part of Southampton Town to the Second District. Where the First District spanned the five East End towns, Brookhaven, and part of Smithtown, the redrawn boundaries extended from the East End into Nassau County, encompassing parts of Islip, Babylon, Huntington, and into Oyster Bay, apparently concentrating more Democratic-leaning voters.

Voters in the redrawn First District voted for President Biden by 11 points in 2020, versus the currently drawn district’s 4-point margin of victory for former President Trump in 2020. Statewide, the redrawn congressional districts would also have made Democratic pickups in Central New York and the North Country likely.

The Court of Appeals appointed Jonathan Cervas of the Institute for Politics and Strategy at Carnegie Mellon University to oversee drawing of new maps for congressional and State Senate districts. He served as the redistricting consultant for the Pennsylvania Reapportionment Commission, according to his website, and has served as the assistant to a federal court Special Master in drawing remedial maps in three redistricting cases involving minority rights.

“The law in New York was very specific,” said Manny Vilar, chairman of the East Hampton Town Republican Committee. “It was memorialized in the State Constitution pursuant to voter ratification, and there was a procedural issue that had to be completed. It was not.”

“I’m glad that in this case it’s going to go to a special master,” Mr. Vilar added. “At the end of the day, there is no way a community like the Town of Oyster Bay has anything in common with eastern Long Island, no slight against the good folks in Nassau County. But it’s a stretch to say that Huntington has something in common with East Hampton. We’ll get a district that’s better representative of eastern Long Island, and regardless of who gets elected they’ll be better suited to represent our needs.”

Jeremiah Mulligan, chairman of the East Hampton Town Democratic Committee, said that he was not surprised by the Court of Appeals’ decision. “That’s an excellent highest court,” he said. “It’s just unfortunate that the highest courts in other states fail to adhere to the high standards set by our highest court. I am not sure how this is all going to play out, whether we’re going to have one primary or two primaries, and how well this master who has been appointed does his job. It’s a real challenge, and I’ll be very curious to see how this goes.”

Asked about the Court of Appeals’ ruling, Anthony Figliola, a candidate in the First Congressional District, told The Star that, “As the only Republican candidate who was born and raised in this district, I am committed to the people first. We’ve crisscrossed the district and have received a lot of support from everyday people: parents, teachers, members of law enforcement, and patriots alike. I will fight for my constituents.”

Suffolk County Legislator Bridget Fleming, a candidate for the Democrats’ nomination in the First District and a former member of the Southampton Town Board, also referred to her experience in the district. “This is the district I’ve always been in, where I served on the town board, where I serve in the County Legislature,” she said. “Because of the geography of my district, I am in New York 1 no matter what happens. That’s a great advantage and certainly reassuring. We’re hitting the doors, making the phone calls, making donor calls, and continuing to run our race.”

“It’s difficult to be uncertain, and certainly difficult to have the finish line shifted for all the folks who are doing the work on the campaign,” she added, “but how it will affect the final outcome is yet to be seen.”