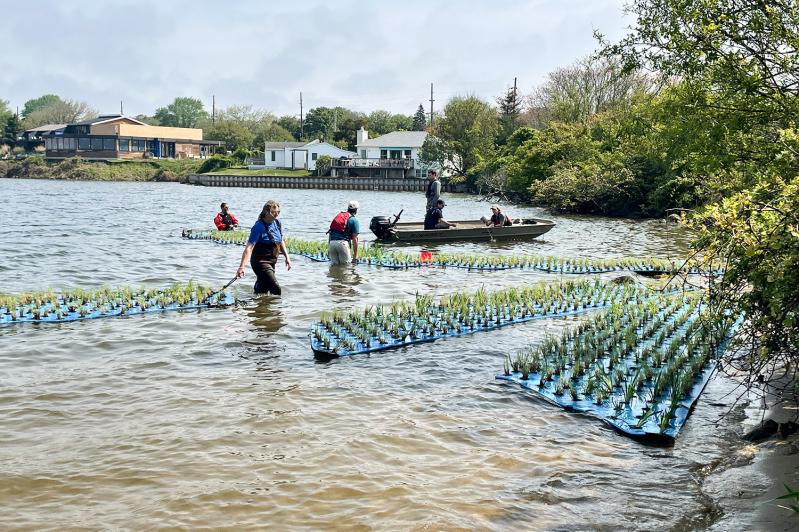 The grant awards program, which uses a portion of money from the community preservation fund, provides an incentive for businesses, community organizations, and others to take action to mitigate impaired water bodies.

The committee made recommendations to the board on May 3 for five projects, four of which are included in the updated recommendation. They were chosen from among 10 responses to a request for applications issued in December.

One recommendation is a grant award to the Pollock-Krasner House and Study Center in Springs for the replacement of a conventional septic system with a constructed wetland alternative system. Constructed wetland systems feature a septic tank but mimic natural wetlands, using plants and microorganisms to treat effluent and reducing nitrogen to levels below or consistent with “innovative alternative” septic systems. The Pollock-Krasner House’s system is expected to eliminate 28 pounds of nitrogen per year.

The property is owned by the Stony Brook Foundation and is within the water protection district of Accabonac Harbor. As a nonprofit organization, the foundation is eligible for full funding of engineering and installation. The committee recommended a $132,100 award toward the project’s $147,170 price tag.

Christopher Gobler of Stony Brook University’s School of Marine and Atmospheric Sciences and director of the New York State Center for Clean Water Technology called to support the recommendation. “The Pollock-Krasner House is located in a very sensitive watershed, very nearby the neighboring water body, and is visited by thousands of people every year,” he said. “So this will be a highly impactful project, both in protecting water quality but also in showing leadership.”

Constructed wetlands are a commonly used wastewater treatment approach across the country, Dr. Gobler said, “but to my knowledge this may be first such project in the Town of East Hampton, and certainly they’re rare on the South Fork and in Suffolk County.”

The Center for Clean Water Technology is working with Suffolk County and the State Department of Environmental Conservation “to get this exact kind of approach to be one that anyone could choose to install, but it needs to go through a process,” he said. In addition to protecting the water body, the project will support the process as constructed wetlands evolve from a piloted technology to one with provisional approval, he said.

Signs at the site will educate visitors as to the pilot project and its use of C.P.F. money, “and that the town is taking proactive measures to address wastewater, and this is a technology that perhaps can be adapted in a widespread manner in the future,” Dr. Gobler said.

Another recommendation is for a $14,250 award to Concerned Citizens of Montauk to install 3,000 square feet of floating wetlands in Fort Pond, which has experienced blooms of toxic cyanobacteria, or blue-green algae, in recent years. Floating wetlands, first installed in the pond in 2019, consist of native plants secured into floating mats. As the plants mature, their roots take in excess nitrogen and phosphorous as food, reducing the nutrient load in the water and enhancing levels of dissolved oxygen.

Laura Tooman, president of C.C.O.M. and a member of the water quality committee, voiced support for all four projects being considered. “Truly, not only are we making real, measurable water quality improvements in Fort Pond, but this is a truly grassroots, community-led effort,” she said, noting the more than 80 volunteers who helped with the installation last year. C.C.O.M. and the town are also working on septic system upgrades, land acquisition, and stormwater discharge to Fort Pond, she said. “I believe this is a true, comprehensive approach to managing and improving Fort Pond’s water quality.”

A large group of volunteers installed the floating wetlands on Saturday.

The committee’s recommendations also include an upgrade of the conventional municipal septic system at the Main Beach pavilion to innovative alternative systems for each of two comfort stations, which would see a reduction of 495 pounds of nitrogen annually. East Hampton Village is the applicant. The Montauk Anglers Club and Marina on Lake Montauk was also recommended for an award, this one of $89,843, to replace its commercial wastewater treatment system with an innovative alternative system that is expected to reduce nitrogen by upward of 70 percent, or 414 pounds, annually.

A fifth recommendation made on May 3 was for Main Street Tavern in Amagansett, which would also see the replacement of a failing conventional septic system with an innovative alternative system. It is eligible for 50 percent of eligible installation costs, and the committee recommended awarding $83,350 toward the project’s $223,950 total cost.

The project would require a sanitary easement from the town to site the leaching field in the municipal parking lot behind the restaurant, however. That proposal will be the subject of a future public hearing, should the board approve the easement.