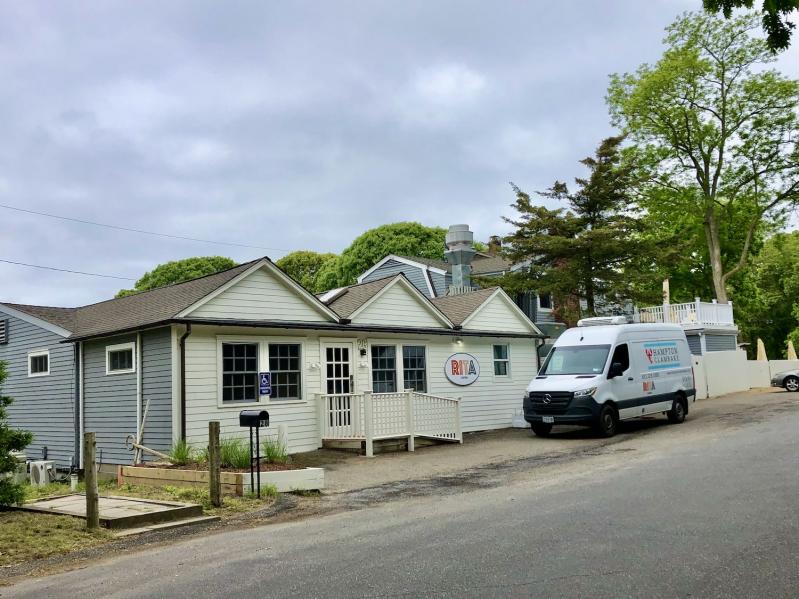 “The nature of the use and the number of catering business that may be operating,” is the main issue East Hampton Town planners have with the Rita Cantina site. “The second most important issue is the sanitary system, and what needs to be done to update that.”
Carissa Katz
By Christopher Gangemi

Rita Cantina, a Springs restaurant that has drawn local criticism for operating three catering businesses from its small plot, learned last week at a meeting of the East Hampton Town Planning Board that it may be required to upgrade its sanitary system to a low-nitrogen system.

The restaurant, an island of business activity in an otherwise residential neighborhood, was last before the planning board on March 23, when the board deemed its site plan to approve two of the catering businesses, Hampton Clam Bake and Food & Company, woefully inadequate. Ann Glennon, the town’s principal building inspector, later wrote, in a determination dated March 29, that the two “provide different menus, preparation, and additional items that are not part of the Rita Cantina restaurant, [and] should not be allowed to operate on the property.”

At that March meeting, the planning board asked Eric Miller, the owner, to update the site plan to show the location of the sanitary systems and to outline which system serviced which building. Along with the restaurant, there are two residences on the .16-acre plot.

The board noted that all the systems dated back to the 1980s, and that there were several cesspools on the property. If indeed they are cesspools, and not septic tanks, they “will trigger an immediate comprehensive site upgrade to a low nitrogen system,” according to a memo prepared for last week’s meeting by Eric Schantz, assistant Planning Department director.

“The main issues here are the nature of the use and the number of catering business that may be operating,” Mr. Schantz told the board last week. “The second most important issue is the sanitary system, and what needs to be done to update that.”

“The sanitary system is the most important item that we should be looking at,” said Lou Cortese, a board member. “This is what’s polluting our waters.”

“I want to use the analogy of Al Capone,” he continued. (The F.B.I. investigated Capone for murder and loansharking, but finally got him on tax evasion.) “This is the reverse of that example. Here, we are concerned with seating, parking, whether there’s a two-foot variance or not — and when we look at the application, we see there’s a murder, and loansharking, and the worst possible crimes going on.”

(The murder, in his analogy, would be a potentially inadequate 40-year-old septic system at the entrance to Maidstone Park, only a short walk from the bay.)

“Lou raises a good point,” said Mr. Kramer. “Can the Planning Department look into the efficacy of finding out on every application whether or not there’s a cesspool that violates town code?”

The evening’s meeting, which also included discussions about parking, Dumpster use, lot coverage, and the restaurant’s seating capacity, came down in the end to exactly what was happening underground.

“The threshold issue right here today is the septic issue . . . you’re never going to get your approval from us without dealing with this cesspool issue,” said Mr. Kramer.

“In order to get to that question, we have further investigating to do,” said James Vlahadamis, a lawyer representing the restaurant. He said it was possible that the “cesspools” were incorrectly marked on the survey, and that they may be septic tanks.

“Some digging” said Mr. Kramer, would answer that question.

Rita Cantina is due back in front of the planning board in the middle of June with an update.

A Conference for Young People to Create Solutions
Get Outside, Get Moving
Two Traditions, One Fair in Springs
END_OF_DOCUMENT_TOKEN_TO_BE_REPLACED