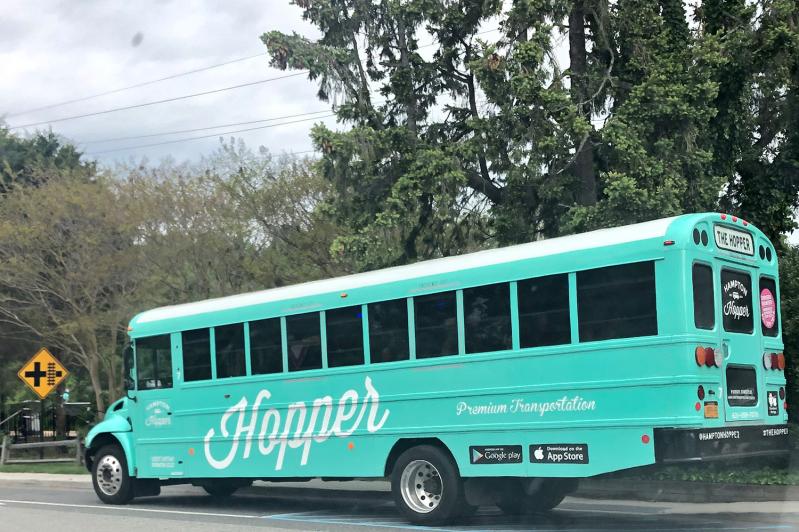 The Hampton Hopper serves as the “last mile” shuttle service for riders of the South Fork Commuter Connection, for which the Long Island Rail Road has nixed Friday morning trains through the summer.
Carissa Katz
By Christine Sampson

The Long Island Rail Road has rejected the request of local lawmakers and commuters to provide one eastbound Friday-morning train on the South Fork Commuter Connection during the summer.

In announcing the news, State Assemblyman Fred W. Thiele Jr. said that the railroad cited a lack of the right equipment and infrastructure as obstacles.

The commuter train system, Mr. Thiele said, has become increasingly popular since its return after Covid-19, and the L.I.R.R.’s decision leaves many commuters without a ride to work.

“The institution of the S.F.C.C. has been one of the most popular decisions the frequently criticized L.I.R.R. has made. In response, the L.I.R.R. has told these commuters to drop dead,” Mr. Thiele said in a release. “You can’t grow ridership if a commuter can only take the train four days out of five, especially when the fifth day is the busiest traffic day of the week.”

With schools in session for another month, the service is hugely popular among teachers, as well as numerous municipal employees, and the staff of Stony Brook Southampton Hospital.

Jeff Neubauer, a teacher at the Bridgehampton School, makes the 20-minute train trip from Hampton Bays to Bridgehampton daily. He said he is extremely happy with the service and its many benefits, but said the L.I.R.R.’s decision “was kind of a letdown,” especially after the railroad responded affirmatively this week to another request — adding an extra car to the increasingly crowded commuter trains.

“If your plan was to get less people on the road, Friday is the one day you didn’t want to not offer the service,” Mr. Neubauer said. “A lot of people are not happy with that . . . I’m sure there’s a creative way to solve this.”

On April 8, Mr. Thiele wrote to the L.I.R.R. on behalf of commuters, their employers, and other local officials, noting that there is already a westbound afternoon train on Fridays that could accommodate passengers. They just need one eastbound ride in the morning.

Catherine A. Rinaldi, interim president of the railroad, replied on May 13. “With the eastbound parade of seasonal service and the limited number of signaled, controlled passing sidings (just two in the 45-mile segment from Speonk to Montauk), the S.F.C.C. trains trying to navigate west just don’t fit . . . the diesel fleet is just stretched too thin.”

Mr. Thiele pointed out this week that the Metropolitan Transportation Authority, which oversees the L.I.R.R., received $350 million in the state budget. He said adding sidings on the South Fork was part of a commitment made by the M.T.A. and the L.I.R.R. during a debate over congestion pricing.

“They have done nothing,” the assemblyman said. “These infrastructure improvements are exactly the kind of transformative project that should now be funded . . . Imagine providing four or five sidings on the South Fork so that multiple trains can run simultaneously, coupled with battery-operated electric cars, which the L.I.R.R. also says it is investigating. This would be a game-changer for the South Fork and all diesel territories.”

A Conference for Young People to Create Solutions
Get Outside, Get Moving
Two Traditions, One Fair in Springs
END_OF_DOCUMENT_TOKEN_TO_BE_REPLACED