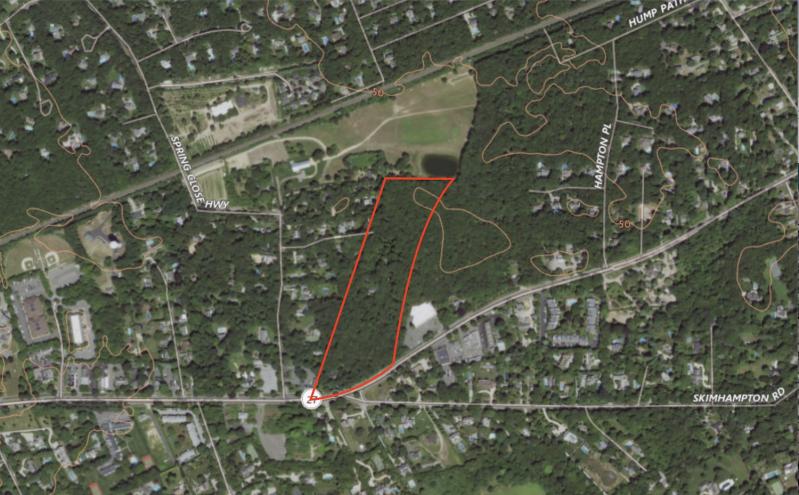 A roughly 12-acre parcel (outlined in red) at 395 Pantigo Road that East Hampton Town acquired in 2020 could accommodate 12 to 16 houses, with five acres set aside for open space.
U.S.G.S.
By Christopher Walsh

With summer looming, and with it a steep hike in rents for extremely scarce housing in East Hampton Town, affordable housing was on the agenda at the town board's meeting on Tuesday.

The average price of a house in the town has risen by 215 percent since 1999, relative to the increase in median family income (43 percent), according to one of multiple presentations on Tuesday. It is the most expensive, both in absolute terms and in comparison to median income, of any East End township.

"There are very few options for people to remain within the community," Supervisor Peter Van Scoyoc said, citing the scarcity of year-round rental housing. Having announced an All Hands on Housing initiative in at the start of 2022, each member of the board reported their progress on specific initiatives to provide affordable rental and ownership options for those who live or work in the town.

Councilman David Lys delivered an update on 395 Pantigo Road, a 12-acre parcel acquired in 2020 with both community preservation fund money and general funds. Seven acres will be dedicated to housing, and five to open space. Detached houses, on the southern portion of the property, will be offered for sale. The board added an affordable housing overlay zoning designation to the site in March, and updated the code to permit four affordable houses per acre, up from two, matching the Suffolk County affordable housing code. An archaeological study was also conducted, and a consultant has assisted with mapping and wastewater management designs.

Four conceptual layouts were presented showing a yield of 12 to 16 houses, and the pros and cons of each were addressed. Housing lots will be around a quarter-acre. "We wanted to maximize the number of units while staying in required parameters," such as adequate buffering from neighboring properties and from Pantigo Road, said Eric Schantz, the town's assistant planning director. "We wanted to make a subdivision that had a sense of community."

Tom Ruhle, director of the town's Office of Housing and Community Development, recommended that houses in the development be kept to 1,800 square feet.

The board will have to decide on a site design, the number of houses, the building vernacular, and approved contractors. "There will be a lot of happy families very shortly," Mr. Lys said.

Councilwoman Kathee Burke-Gonzalez offered an update on the town-acquired property at 776 and 780 Route 114 in the Wainscott School District, just outside of Sag Harbor Village, consisting of two lots totaling around 6.5 acres. The Sag Harbor Community Housing Trust owns the two-acre parcel at 782 Route 114, and the plan is to develop the entire 8.5 acres. Earlier this year, the town voted to add an affordable housing overlay zoning designation to the three properties.

The plan here is for 50 to 60 apartments of modular construction, primarily one-bedroom units, for people of median income who live and work in the town, Ms. Burke-Gonzalez said. It will be modeled on the 26-unit Springs-Fireplace Apartments in East Hampton, Mr. Ruhle said, with the town securing all approvals and a contractor. The town and the Sag Harbor Community Housing Trust will contribute the land, he said, and the town will finance construction and, once completed, turn the development over to the East Hampton Housing Authority, which will oversee it.

Katy Casey, director of the Housing Authority, told the board that 50 units of one, two, and three-bedroom rental apartments for moderate and low-income residents will be built at 286 and 290 Three Mile Harbor Road in East Hampton. There will be five two-story buildings, she said, and current analysis has determined that two-bedroom units are needed most.

Councilwoman Cate Rogers reported on her ongoing west-to-east search for town-owned properties that could be dedicated to affordable housing. There are approximately 1,800 vacant properties in the town, including those in private ownership, she said, describing "needle-in-a-haystack work." A list has been created of all town-owned vacant properties, excluding that purchased for open space or recreational opportunities, she said, and to date, 251 have been inventoried and categorized. As of Tuesday, eight properties of one acre or more have been identified as potential sites for community housing. "If we have properties we could put one unit on," she said, "I think it's worth it." She invited private property owners interested in subdividing and selling to the town to contact her.

Mr. Van Scoyoc spoke of the Peconic Bay Region Community Housing Act, which authorizes the five East End towns to establish community housing funds with proceeds from a .5-percent real estate transfer tax, which would be in addition to the 2-percent transfer tax for the community preservation fund. Should voters approve the transfer tax in a referendum on the ballot in November, the town will have "perhaps the most important tool" to address the scarcity of affordable housing, he said last week.

In order to act on the authority bestowed by the Peconic Bay Region Community Housing Act, each town must first develop its own enabling legislation. Jeremy Samuelson, the town's planning director, said that in order to meet filing deadlines, the board should review a finalized plan for its housing fund by early next month, with public comment in June and July and a public hearing and adoption in July. Should voters approve the fund, it would be operational in January 2023, 60 days after Election Day.

Buyers, with the exception of first-time homebuyers, would pay the tax, with the first $400,000 exempt up to purchases of $2 million. The money could be used for down-payment assistance, land acquisition, project design and development, accessory dwelling units, rehabilitation loans and grants, rehabilitation or improvement of existing town-owned housing, affordable housing easements, and housing counseling.