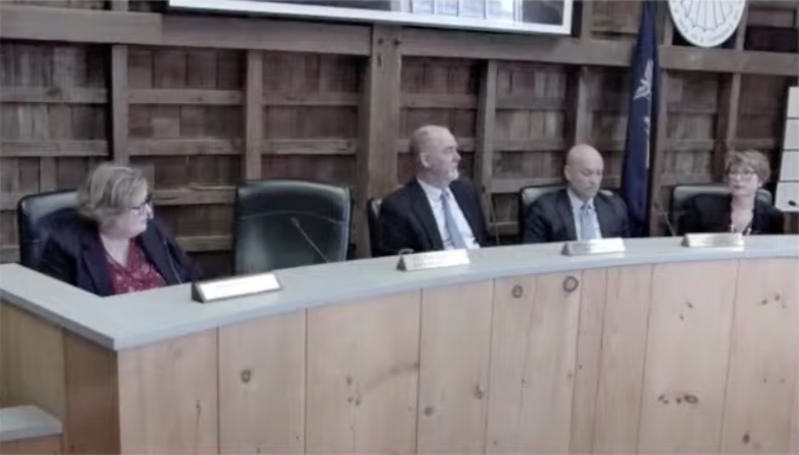 The East Hampton Town Board met in person on April 5.
LTV
By Christopher Walsh

The East Hampton Town Board held an in-person meeting on Tuesday, its first since last summer, when the Delta variant of the Covid-19 halted what proved to be a short-lived resumption of pre-pandemic life.

The Delta variant, followed by the even more transmissible Omicron variant, kept the board's proceedings virtual throughout the winter. Supervisor Peter Van Scoyoc lifted an emergency declaration last month, two years after it was imposed as the Covid-19 pandemic upended life as we knew it.

The board got brief updates on the new senior citizens center that is to be built on Abraham's Path in Amagansett and on a temporary cell tower to be placed at Gann Road in Springs. Special events and upcoming April 21 hearings on peddling, survey requirements for building permits, and a modification to the management plan for the Arts Center at Duck Creek in Springs were also discussed.

The board is proposing a code change to require a staked survey indicating the clearing envelope on a property, which would be submitted with a building permit application. Failure to comply would be grounds for denial or revocation of a building permit, or grounds to issue a stop-work order. The move is aimed at precluding instances of over-clearing of properties during construction.

Another code change that the board is seeking comment on would see modifications to the management plan for the Arts Center at Duck Creek in Springs, where a small garage would be improved with an Americans With Disabilities Act-compliant walkway and other minor changes so that it can host art exhibitions.

Minor changes proposed to the town code with respect to peddling involve new language to clarify the existing definition of "peddler" to include "any person who solicits orders, processes transactions, or otherwise conducts business on the internet or via mobile app as a separate design to evade the provisions of this local law." Another proposed addition adds explicit authorization for any enforcement agency issuing a violation "to seize the instrumentality of peddling to be used as evidence in Justice Court prosecution," David McMaster, an assistant town attorney, told the board last month.

As for special events during the upcoming summer season, "Everything is back into full swing," said Councilwoman Kathee Burke-Gonzalez, referring to farmers markets, the Clamshell Foundation's annual fireworks show and sand castle contest, and road races, among other events.

The board talked about a few specific special event applications, including commercial surf instruction at Ditch Plain Beach in Montauk and a tea dance to be held by Hamptons Pride and scheduled for Aug. 28 at Wainscott Green, a town-owned property whose management plan does not address special events.

The Montauk Music Festival will return from May 20 to 22, Councilwoman Cate Rogers noted, with plans for live music at more than 40 venues, though many of them have yet to secure a music permit.

In other news from the meeting, Ms. Burke-Gonzalez said that she and Diane Patrizio, director of the town's Human Resources Department, have been meeting with R2 Architecture, which is providing architecture and engineering services for the new senior citizens center to be built off Abraham's Path in Amagansett. A survey in English and Spanish is to be issued and open house-type workshops scheduled so the public can provide feedback as to the new center's design and features.

The temporary "cell on wheels" that is to be sited on Gann Road in Springs should be in place around Memorial Day, Ms. Rogers said. As part of the upgrading of the town's emergency communications system that started in 2017, a permanent, 185-foot tower for Springs is to be erected at Camp Blue Bay on Flaggy Hole Road, owned by the Girl Scouts of Nassau County. Until that tower is operational, the board plans to site an 88-foot-tall cell on wheels, communications equipment mounted on a trailer that is also known as a COW, in Springs.

The board will meet again today, also in person, at 2 p.m.

A Conference for Young People to Create Solutions
Get Outside, Get Moving
Two Traditions, One Fair in Springs
END_OF_DOCUMENT_TOKEN_TO_BE_REPLACED