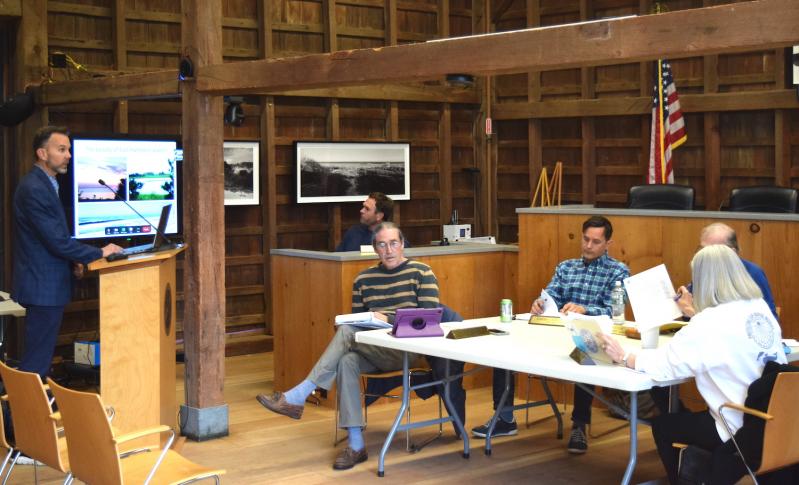 Hybrid meetings, like this one in April when the public could attend and comment in-person or virtually, could become permenant for the East Hampton Town Trustees.
Christopher Walsh
By Christopher Walsh

The East Hampton Town Trustees plan to make permanent the allowance of “hybrid” meetings, in which video conferencing would enable both in-person and remote participation of the board and its committees.

At their meeting on Monday, the trustees heard from their attorney, Christopher Carillo, about the changes adopted with New York State’s 2022-23 budget making permanent Covid-19 pandemic-era exceptions to New York State’s Open Meetings Law that allowed meetings to be held, and the public to participate, via video conference. In order to do so, a governing body must pass a local law, following a public hearing, authorizing the use of video conferencing.

Earlier in the day, Mr. Carillo had circulated an outline of the amendments to the Open Meetings Law and a draft resolution that is “in lockstep” with state guidelines “so that we can begin to adopt a strategy for our meetings” using the hybrid approach, he told the trustees.

The trustees’ resolution, should it pass, would also mirror legislation under consideration by the town board, he said. The town board held its first substantive discussion about permanently allowing hybrid meetings on April 19.

Permanent legislation must ensure the ability of the public and the media to directly access government officials in person, according to a statement issued by Assemblyman Fred W. Thiele Jr. earlier this month. Mr. Thiele is chairman of the Assembly Committee on Local Governments. The public body will also have to establish written procedures governing member and public attendance consistent with state law, with those procedures conspicuously posted on its website.

For the trustees, a quorum of five would have to be physically present, allowing up to four to participate remotely, but “only under ‘extraordinary circumstances’ such [as]: disability, illness, caregiving responsibilities, [or] other unexpected factor precluding attendance,” according to the draft resolution.

The trustees would have to define what other circumstances, if any, would be considered extraordinary, allowing a member to attend a meeting virtually. The policy would not be “a free pass” to forgo attendance, Mr. Carillo said. “We should be here” absent a compelling reason.

Six of nine members attended Monday’s meeting in person, in the main meeting room at Town Hall. The other three did not appear virtually.

The trustees must provide an opportunity for the public to view and participate in meetings both in person and via video conference in real time, and ensure that members can be heard, seen, and identified during meetings, according to the draft resolution. Minutes must identify the names of members who participated remotely and in person, and the public notice of the meeting must inform the public where to view and participate virtually as well as physically, and where records will be made available.

The trustees must maintain their website, at ehtrustees.com, and recordings of each public meeting must be posted to the website within five business days of the meeting and be available there for at least five years. Transcriptions of public meetings must be made available upon request, and all video conferencing will have to use technology consistent with the Americans With Disabilities Act of 1990.

Mr. Carillo recommended that the body establish rules and processes for hybrid meetings and publish a notice for a public hearing on its website and in The Star, with the hearing scheduled for the trustees’ next meeting, on May 9. He asked that the trustees send comments on the draft resolution to him by email. “We can produce an updated policy to be reviewed prior to the public hearing, and vote at the hearing,” he said.

Should a public body authorize hybrid meetings, the current authority to hold virtual meetings without an in-person component will continue for 60 days after the effective date of the new law. The trustees’ policy on meetings “can be a working document that we look at whenever we need to and update” within state guidelines, Mr. Carillo said.