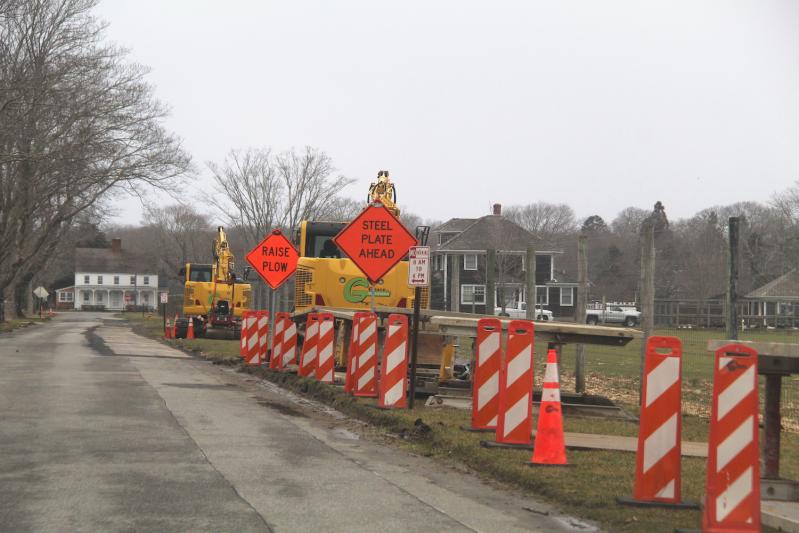 Work on Beach Lane in Wainscott, on the wind cable's route to a Long Island Power Authority substation in East Hampton
Durell Godfrey
By Christopher Walsh

A lawsuit seeking to stop the installation of an underground electric cable serving the South Fork Wind Farm was rejected by a federal judge last week.

The wind farm cable is to make landfall at Beach Lane in Wainscott and follow a subterranean path to a Long Island Power Authority substation in East Hampton. Work has begun along the route.

The plaintiffs in the suit filed in United States District Court last month, Pamela Mahoney, Michael Mahoney, Lisa Solomon, and Mitch Solomon, cited the potential of that work to spread perfluorinated chemicals, known as PFAS, that had been detected in nearby groundwater. The lawsuit named the Department of the Interior, the federal Bureau of Ocean Energy Management, and the United States Army and the federal Army Corps of Engineers as defendants. The Bureau of Ocean Energy Management is part of the Department of the Interior. Approval of each of the agencies was required for the wind farm’s construction.

The defendants, the plaintiffs contended, “did not reasonably analyze the last piece of the puzzle — how to run the high-voltage export cable from the offshore facility to the local power grid. Instead, the agencies approved a route that will . . . trench through areas known to be contaminated” by PFAS. That trenching, they said, “will likely spread the PFAS contamination to other properties” including the plaintiffs’ properties “and will likely contaminate private and public drinking water wells in and around East Hampton.”

The website Law360 reported last week that Judge Frederic Block of the United States District Court for the Eastern District of New York said that the plaintiffs “failed to show that they were likely to suffer irreparable harm when workers dig trenches for underground cables that will connect to the offshore wind project.”

Law360 said that Judge Block noted that federal environmental reviews had taken concerns about PFAS contamination into account, and that the plaintiffs should have raised their concerns during the public review process. They did not demonstrate that irreparable harm was likely, he said.

The Hicks Thomas firm of Houston is representing the plaintiffs in what is one of multiple efforts by some Wainscott residents to thwart placement of the wind farm’s onshore components in Wainscott. Previous efforts included an unsuccessful attempt to force a vote to form an incorporated village in a portion of the hamlet.

John Thomas, a Hicks Thomas attorney representing the plaintiffs, said in an email that “the health and safety of our clients and their neighbors has been our top priority in seeking injunctive relief. While the judge denied this preliminary relief, we will continue to monitor PFAS levels in and around the construction and will take appropriate action as facts develop.”

“We will seek disclosure of the PFAS levels in any groundwater encountered during construction as part of our next steps,” Mr. Thomas added.

Known as “forever chemicals,” PFAS can be toxic to humans and wildlife. Those detected in groundwater in Wainscott, believed to have originated in firefighting foam stored and used at East Hampton Airport, have been shown to interfere with the hormonal system, the reproductive system and the development of the fetus, impact the immune system, reduce responses to vaccines in children, and promote certain cancers.

Mashashimuet Park's History and Future
A Conference for Young People to Create Solutions
Get Outside, Get Moving
END_OF_DOCUMENT_TOKEN_TO_BE_REPLACED