Company readies ‘a broader schedule than ever’ 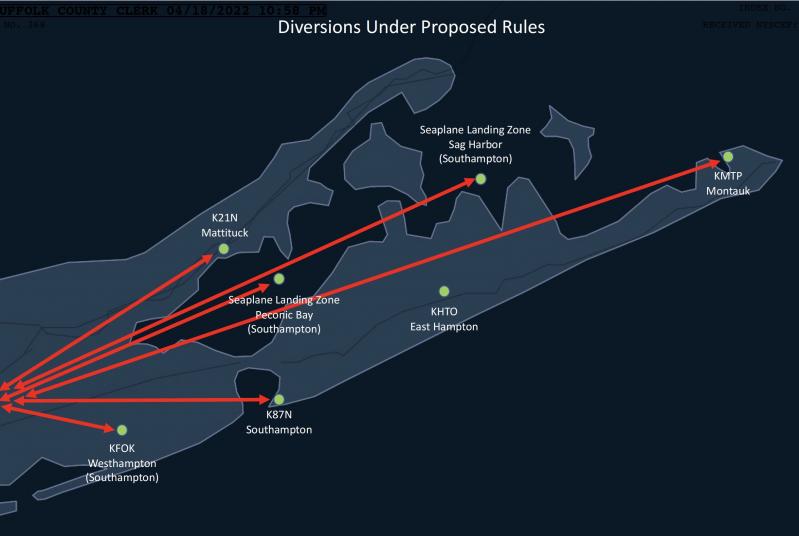 A diagram included in recent court filings shows where Blade aims to divert its customers' flights.
By Christopher Walsh

“An overwhelming percentage” of users of Blade Air Mobility, which allows users of its app to book seats on scheduled helicopter and airplane flights, will fly “into or out of other sites on the East End” if the aircraft they are taking to the Hamptons is prohibited from landing at East Hampton Airport, the company promised this week.

In documents filed with New York State Supreme Court on Monday, Blade cited data collected on its users’ travel preferences in suggesting that they would fly instead to Montauk Airport, “seaplane landing zones” in Gardiner’s Bay and Peconic Bay, and sites in Southampton, Mattituck, and Westhampton Beach, worsening summer traffic both in the air and on the roads.

Blade was one of three entities to file complaints challenging the plan put in motion in January when the town filed notices with the Federal Aviation Administration to formally close the airport and open a new one, on the same site, under a prior-permission-required rule, requiring advance clearance before a pilot may use it. The three plaintiffs seek a preliminary injunction to prevent the airport’s closure on May 17.

An initial plan to close the airport on Feb. 28 and open a new, private-use one days later was postponed to May 17, with the opening of “East Hampton Town Airport” to come two days later.

Blade estimates that at least 60 percent of flights booked through its platform that would have landed at East Hampton Airport will be diverted to other landing areas, including the aforementioned sites “as well as ocean landing sites,” according to Mr. Dean’s affidavit.

Restrictions under the prior-permission framework at the new airport “will also gut the operational efficiencies that are critical to the economic viability of Blade’s business model,” Mr. Dean’s affidavit continues. He also disputes the town’s assertion, made in an opposition brief, that in July a Blade operator had engine trouble “shortly after violating the town’s guidelines for aircraft to maintain at least 500 feet of altitude to allow time for an emergency landing.”

A memorandum filed on Monday in support of the motion for a preliminary injunction criticizes the defendants — the town, the town board, and Supervisor Peter Van Scoyoc — for what the plaintiffs insist is a blatant failure to conduct New York State-mandated environmental review. “The mountain of paper the Town of East Hampton has dumped into this record cannot bury the fact that the town has failed to do the environmental review that state law requires before changing East Hampton Airport’s use in ways that will have significant environmental impacts yet to be assessed, measured, and mitigated,” it states. Instead, the memorandum states, the town promises to study the impact of those changes after the fact.

The town board intends to study the impact of the new restrictions on all affected airports during the summer season, which is to inform a final prior-permission framework. Consultants to the town outlined a draft environmental impact statement during the town board’s work session on Tuesday. That presentation is covered separately in this issue.

“SEQRA mandates that government agencies must consider the environmental consequences of actions ‘at the earliest possible time,’ “ the memorandum continues. But the town “plans to postpone any review of this fundamental change” until after the imposition of restrictions on aircraft operations, which “it will then ‘test’ this summer.”

“The town cites no case — and we are aware of none — where any New York court has ever approved of local government authorities implementing such a major land use change, which, once made, will admittedly have profound consequences, on the promise it will ‘study’ the consequences after the fact,” the memorandum continues. “Thus, the town expects this court to go where no New York court has ever gone. This court should have none of it.”

Representatives of Blade predicted fallout from the imminent changes at the airport. “The biggest consequence we see is diversion to other airports,” one official said last week, speaking on background. “Hundreds and hundreds” of its passengers, the official said, have told Mr. Van Scoyoc via email that “they will continue to fly to other places” on the South Fork. The company is preparing “a broader schedule than we’ve ever done previously,” including to “locations we haven’t done historically,” citing Montauk, Sag Harbor, Southampton, and Westhampton Beach. “We believe it’s very hard to go from flying 40 minutes to driving four hours. I just don’t see our fliers giving that up.”

The new airport will represent “a shocking change for the region,” said Randy Mastro, an attorney representing Blade, citing diversion to other area airports. The town, he said, should “do the hard work in advance to try to prevent such significant environmental impacts” of the changes to be implemented. “But the town is doing the opposite, and that’s why we’ve gone to court and are imploring the court to stop the town from this ill-conceived, rushed decision to close its airport and then reopen it as a private facility for limited use.”

The Coalition to Keep East Hampton Airport Open and East End Hangars also filed suit in February seeking to prevent the town from carrying out its plan. Michael A. Berlin, an attorney representing the former group, said on Tuesday that his firm, Greenberg Traurig, has confidence in the coalition’s lawsuit. “The town has argued that it can move forward even though its environmental review is not complete,” he said. “We are confident the law does not allow a party to act first and study later.”

A Holiday Gift for Surfers and Beach Lovers
Holiday Lights Go On at the Lighthouse Saturday
Covid Vaccine Clinic at St. Luke's
END_OF_DOCUMENT_TOKEN_TO_BE_REPLACED