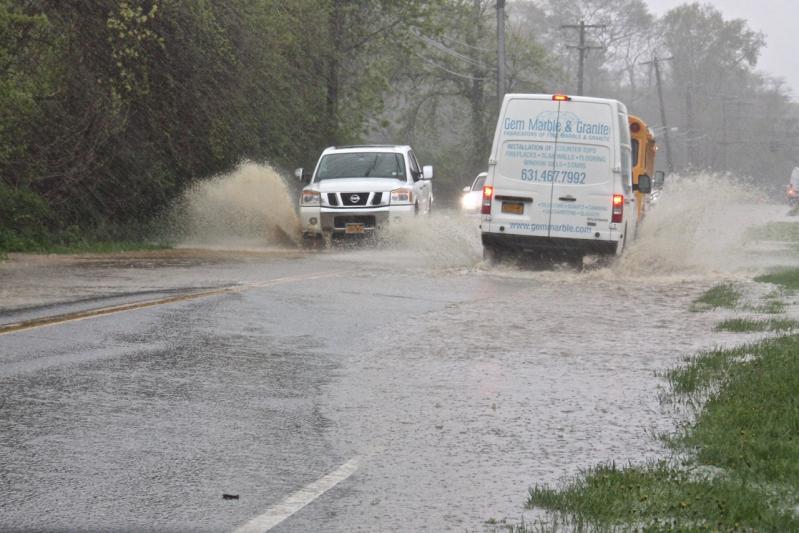 Flooding has been a problem along parts of Route 114.
Durell Godfrey
By Christopher Walsh

An engineering project to alleviate chronic flooding on Stephen Hand’s Path near its intersection with Route 114 in East Hampton is projected to begin this fall and be completed in the spring of 2023, the town board was told on Tuesday.

Councilman David Lys, the board’s liaison to the Highway Department, and James Peterman of LK McLean Associates diagrammed improvements to drainage at the well-traveled intersection, where stormwater runoff from adjacent fields has caused flooding. Increasingly, the floods have forced temporary closures of Stephen Hand’s Path from its intersection with Long Lane to Route 114. These closures divert traffic, potentially delaying emergency services vehicles.

The Stephen Hand’s Path-Route 114 intersection is also hazardous, with 46 documented accidents there since 2014.

“Even though our annual average rainfall hasn’t increased by that much,” said Supervisor Peter Van Scoyoc, “it’s coming in torrents when it does come. I think there were something like a dozen times that road was closed in the past year.”

“There is historic legacy drainage already here,” Mr. Lys said, “but not enough to capture the rain.”

The drainage plan discussed Tuesday, which will employ larger piping and drainage basins than currently exist at the site, is separate from State Department of Transportation projects happening at the same location, one of which is ongoing.

“Our project basically addresses the conveyance of water as it accumulates on the roadway,” Mr. Peterman said, “where instead of going overland, we’re sending it into some pipes and sending it into some open channels. We’re using the open channels to help slow the water down . . . once you get below one foot per second of flow in a channel, 90 percent of your suspended solids drop out. That would help clean up that dirty water flowing into vacant land adjacent to Stephen Hand’s Path.”

“The farm fields are full of silt,” Mr. Lys said. “That’s one of the problems with any type of drainage: it gets silted up. We’re looking to design a project now that will trap and capture the drainage that’s coming almost all the way up from Long Lane, but also allow for long-term maintenance.”

State officials, Mr. Peterman said, “let us know that they were in the process of doing an intersection improvement.” A state project to complete additional drainage improvements at the intersection, add left-turn lanes on all approaches, and extend the right-turn lane on Stephen Hand’s Path is slated for 2024, he said, and is independent from state work now going on.

Another, longer-term goal, Mr. Lys said, is bicycle-lane connectivity, creating and linking lanes on Route 114, Stephen Hand’s Path, and Long Lane “right down into the Village.”

The project is the “Number 1 priority” of Stephen Lynch, the superintendent of highways, Mr. Lys said, with respect to drainage. “Historically, it’s been flooding, it ices over, and requires a lot of manpower to clean it. And then there’s the emergency response time.”

Mr. Peterman is hoping that a contractor will be chosen by late summer, with construction started in the fall and completed by May 2023.

A Conference for Young People to Create Solutions
Get Outside, Get Moving
Two Traditions, One Fair in Springs
END_OF_DOCUMENT_TOKEN_TO_BE_REPLACED