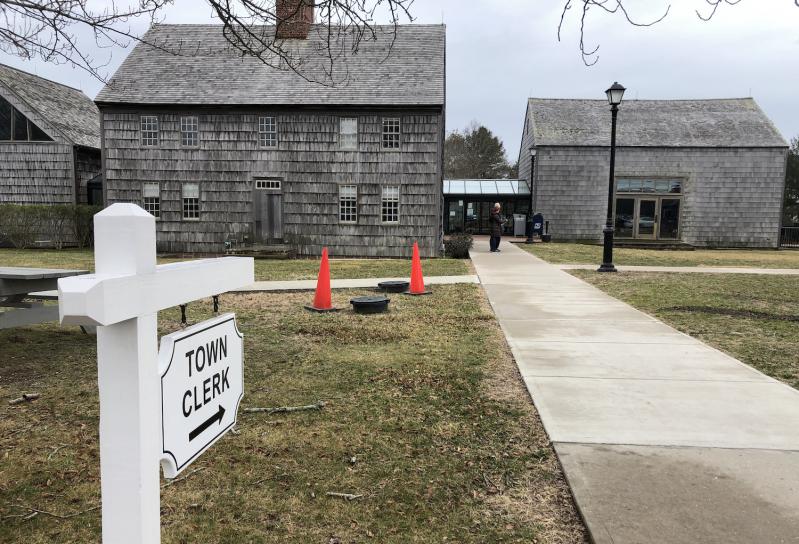 East Hampton Town Supervisor Peter Van Scoyoc said he hoped that the state will make permanent the allowance of "hybrid" meetings in which the public could participate in person at Town Hall or remotely.
Carissa Katz
By Christopher Walsh

Two years and two days after East Hampton Town declared a state of emergency because of a surging Covid-19 pandemic, Supervisor Peter Van Scoyoc announced on Tuesday the rescinding of that declaration and of its accompanying executive orders, saying that he was "really excited that things are looking up, finally, after two very long years."

Throughout that time, people in East Hampton and around the world have struggled with myriad aspects of life, he said, including income, education, "you name it." He praised the community for banding together to help those in greatest need and at greatest risk of illness or death. Everyone, he said, "can feel good about what we've done together."

Tuesday's meeting was possibly the town board's final remote-only one. Gov. Kathy Hochul was to decide yesterday on whether certain temporary changes to New York State's Open Meetings Law allowing for virtual meetings would expire at midnight or be extended.

The governor typically does not inform municipalities as to the expiration or extension of those changes until the day they are due to expire, Councilwoman Kathee Burke-Gonzalez said, "so we're all waiting here on pins and needles to know whether we're going back to public meetings."

In January, the governor signed a bill co-sponsored by Assemblyman Fred W. Thiele Jr. that allows state and local governments to conduct meetings via telephone or video conference for the duration of the Covid-19 state disaster emergency. The legislation allows public bodies to continue meeting virtually, a practice normalized during the pandemic to control the spread of the virus, provided that the public has the opportunity to watch or listen.

Mr. Van Scoyoc said on Tuesday that he hoped that the state will make permanent the allowance of "hybrid" meetings in which the public could participate in person or remotely. Such a framework "allows better accessibility to government," he said. It gives the disabled and those taking care of children or at their place of employment the ability to "take part in the democratic process in real time," he said, for which there is "no substitute." Better government results when it is "informed by the people we work for," he said.

Ms. Burke-Gonzalez said that she and Councilwoman Cate Rogers met with the town's information technology officials in the main meeting room at Town Hall on Monday so that town staff "would be prepared for that imminent switchback" to in-person meetings while also accommodating remote participation, which Mr. Van Scoyoc later said has allowed "much more public engagement in town board meetings." The board's meetings are also broadcast live on LTV and webcast on its website YouTube channel.

If the board's scheduled meeting today is in virtual format, the board would resume in-person meetings at its first meeting next month, scheduled for April 5.

Friday, March 13, 2020, was the fittingly sinister date on which the town and East Hampton Village declared a state of emergency, canceled most meetings, and announced initiatives to allow essential government functions to continue while minimizing face-to-face contact and residents' need to visit Town Hall, Village Hall, and other government facilities. The state of emergency authorized Mr. Van Scoyoc, in conjunction with Bruce Bates, the town's emergency preparedness coordinator, and Town Police Chief Michael Sarlo to "take whatever actions are deemed necessary to protect public health and safety," according to a statement issued by the town on that fateful day.

The town's state of emergency declaration was issued barely one hour after then-President Trump declared a national emergency. It also closely followed the Suffolk County Health Department's announcement of the first confirmed case of Covid-19 infection in the town.

The Montauk Friends of Erin's St. Patrick's Day Parade and the Am O'Gansett Parade were canceled that year and again in 2021. This year, parades are on again, in Amagansett on Saturday and in Montauk on March 27.

Mr. Van Scoyoc said on Tuesday that, as the weather warms, he expected the infection rate to continue falling. "The whole world was turned upside down for two years," he said, adding that he is pleased to see the return of parades and encouraged people to "get out and see everyone, have a good time, celebrate what is in some ways the beginning of summer, when local businesses start opening up."

But whether or not the Covid-19 pandemic is truly in decline remains to be seen. Recent statistics issued by the governor's office show a small uptick in new infections after several weeks of steady decline. The seven-day average of positive test results in Suffolk County was 1.4 percent on Sunday, and 1.5 percent on Monday.

Bloomberg reported on Monday that more than one-third of the federal Centers for Disease Control and Prevention's wastewater sample sites across the United States revealed rising Covid-19 infection trends in the period from March 1 to last Thursday. The number of sites with rising signals of Covid-19 cases was nearly twice that of the period of Feb. 1 to Feb. 10, as the virus's Omicron variant-led surge was in rapid decline, according to Bloomberg.