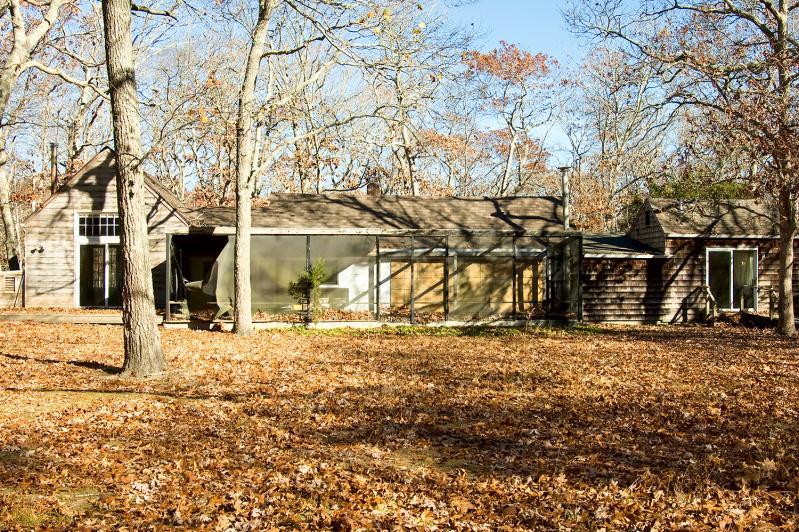 The initial plan for the Brooks-Park property, an 11-acre parcel the town acquired in 2013 with C.P.F. money, was to demolish the late artists’ studios, a residence, and a cottage and create open space.
Jane Martin
By Christopher Walsh

The East Hampton Town Board’s public hearing on the Community Preservation Fund’s 2022 management and stewardship plan last Thursday drew many comments, most of them focusing on the Neck Path, Springs, property of the late Abstract Expressionist artists James Brooks and Charlotte Park.

A management and stewardship plan is required for all properties acquired with money from the community preservation fund, which comes from a 2-percent real estate transfer tax. “We have acquired interests and rights in real property for 480 parcels, with 17 more in contract, representing over 2,300 acres,” Scott Wilson, director of the town’s Land Acquisition and Management Department, told the board. Significant projects for 2022, he said, may include restoration of the Brooks-Park property, restoration of a farmhouse on the Duck Creek property, also in Springs, and restoration of the Carl Fisher house in Montauk, among others.

The initial plan for the Brooks-Park property, an 11-acre parcel the town acquired in 2013 with C.P.F. money, was to demolish the late artists’ respective studios, a residence, and a cottage and create open space, but a group of Springs residents lobbied for preserving the buildings. The buildings were designated a town historic landmark in 2014, which allowed for C.P.F. money to be spent toward the site’s restoration but not for its management.

In 2018, the town board approved a management and stewardship plan for properties acquired with the community preservation fund, but the following year the town’s property-management committee concluded that the buildings at the Brooks-Park property were derelict and that their restoration would be cost-prohibitive. The committee recommended the structures’ demolition, spurring a renewed push for a not-for-profit entity to manage the property, and a committee formed to develop a management and maintenance plan. It issued a final draft plan to the town in December, and last month, in partnership with the East Hampton Trails Preservation Society, debuted Brooks-Park: The Intersection of Art and Nature with a hike of the trails around the property that drew at least 125 people on a frigid morning.

“It’s not just buildings we’re preserving here,” said Irwin Levy, a member of the town’s nature preserve committee who led the hike. “It’s heritage, it’s who we are. Please seize this moment now” by preserving and restoring the structures on the Brooks-Park property, he said.

William Shakespeare said that the object of art is to give life a shape, said the artist Janet Jennings of the committee, also noting that Einstein said to “look deep, deep into nature, and then you will understand everything better.”

“We wish to create a center where love of nature and passion for art can be cultivated,” she said in urging the board to designate C.P.F. money to restore the structures and to approve the committee’s management plan.

Brooks and Park were “such an integral part” of the Abstract Expressionist movement, said Jane Martin, another committee member. The Brooks-Park Arts and Nature Center “would be an incredible contribution to the artistic legacy of East Hampton,” she said.

Scott Bluedorn, an artist and a member of the committee, also called on the board to allocate the money needed to “shore up these structures in a proper way and accept the management plan we have put forward” so that the proposed center “can become a great outlet for the arts and nature communities” and foster a relationship between the two. Nature, as manifested in the unique light and landscape of the town, is what brought artists here, he said, contributing greatly to the town’s cultural heritage.

“The trails are a wonderful part of that preserve, and I often walk on them,” Rameshwar Das of Springs told the board. It is true that the structures on the property are “somewhat dilapidated and need major restoration,” but it is important to realize “the deep importance of this Abstract Expressionist movement, not just in the culture of the town, which it is, but it really has this international, revolutionary change that it created in the whole perception of art, in my lifetime, anyway.” The structures’ restoration and establishment of the Brooks-Park Arts and Nature Center, he said, “really will bring national and international attention to the town.”

In total, the board heard from around 10 East Hampton or Southampton Town residents during the hearing, all enthusiastic about efforts to preserve land for the sake of open space and to preclude further development, but some insisting that more be done to meet the moment. Jon Stoner, a longtime summer resident of Wainscott and now a year-round resident of Sagaponack, said that he and fellow members of the recently formed Wainscott Heritage Project applaud the town’s efforts to preserve farmlands, woodlands, wetlands, and viewsheds, but are “alarmed by intensifying overdevelopment” across the East End, with structures not in keeping with the community’s character. This, he said, is overwhelming public spaces, overburdening finite resources, and creating a blight on the environment.

Given the C.P.F.’s significant role in the town, “we note the absence in the plan of a qualified preservation staff,” he said. He urged the board to consider a professional preservation staff as a component of the 2022 management and stewardship plan to “complement and enhance the excellent work already being done” in this “piece of paradise” that attracts visitors from near and far. Sarah Kautz, preservation director at Preservation Long Island, also called for the hiring of at least one full-time preservation planner as part of the town’s C.P.F. program.

Krae Van Sickle, a member of the town’s energy and sustainability advisory committee, suggested that native pollinator and carbon sequestration components apply, at minimum, to lands acquired under parks and recreation, farmland, and historic designations. Native grasses support other native species like birds and insects, he said, providing vital life support services such as pollination and groundwater recharge, and create “a rich biome of life in the soil which becomes more nutrient rich” and hospitable to agriculture.

Given the town’s 2021 declaration of a climate emergency, which is supposed to broadly guide the board’s policy decisions, “carbon sequestration in soil is a big deal,” Mr. Van Sickle said, speaking of “so many cascading benefits to creating regenerative soil health.”