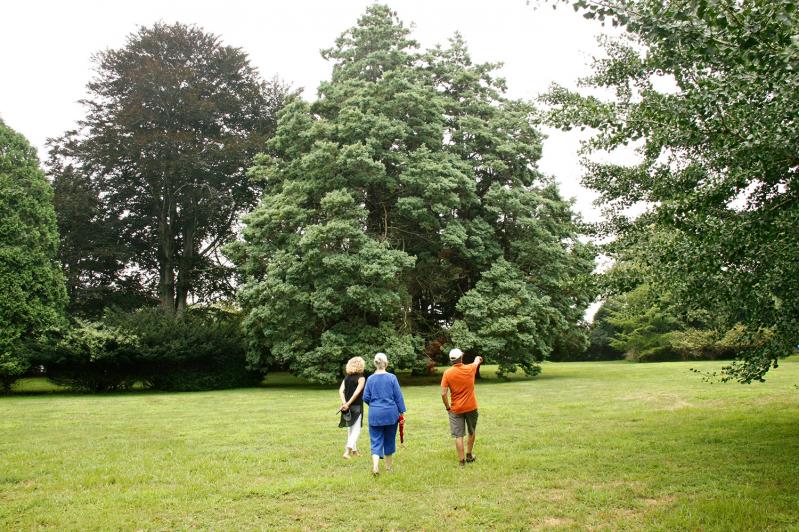 Members of the East Hampton Ladies Village Improvement Society got a tour of the Dayton family’s East Hampton Village land in 2018, some of which will soon comprise the Douglas E. Dayton Arboretum in perpetuity.
Durell Godfrey
By Christopher Walsh

East Hampton Town’s purchase of a parcel adjacent to Herrick Park in East Hampton Village using community preservation fund money has hit a snag over the future use of the property.

Ralph Dayton agreed to sell the approximately one-third acre of developed land at 21 Muchmore Lane to the town for $2.75 million and demolish the existing house there. Mr. Dayton’s late father, Douglas Dayton, a former mayor of the village who died in 2003, lived most of his life on the property.

Mr. Dayton previously sold to the town the parcels at 14 and 16 Pleasant Lane and 25 Muchmore Lane, all purchased with C.P.F. money. “Horticulture was his passion,” he wrote of his father in a letter to The Star last month, and the family determined that the properties should make up an arboretum dedicated to the elder Mr. Dayton.

Terms of the transfer of 21 Muchmore Lane to the village, he said, include a declaration of covenants and restrictions. “A dedication plaque shall be mounted at the premises,” according to that document, “on a plaque or sign honoring seller’s father, Douglas E. Dayton, naming the park the ‘Douglas E. Dayton Arboretum.’ ”

“Working with the town and village to create this arboretum and dedicating it to my father has been the single greatest honor of my life,” Mr. Dayton wrote, “and I know Doug would be honored and delighted that the people of East Hampton will enjoy the grounds he loved so much — in perpetuity. This was something he and I discussed.”

Mayor Jerry Larsen and Deputy Mayor Christopher Minardi called in to the town board’s Sept. 23 public hearing to speak in support of the property’s acquisition, which “would go a long way to help us expand our park,” the mayor said. “We’re currently doing a renovation of the park. We’re in the process, so this is going to be a huge help for us to continue that effort.”

The property is adjacent to Herrick Park, Mr. Minardi noted, “and the future plans that we have been working on right now is very special to the village.”

Another caller, Jaine Mehring of Amagansett, spoke against the purchase. She cited the price, which she noted was equivalent to more than $8 million per acre, and criticized what she called a lack of transparency, as the seller was listed as a limited liability corporation. She also said that the park “appears to be being transitioned from a park mostly for passive enjoyment and casual recreation into a heavily used event venue, which I do not see is consistent with C.P.F. priorities.”

She asked if the transaction should be “held back until there’s more clarity about the redevelopment of Herrick Park” per its ongoing re-envisioning and “what appears to be growing involvement of private interests” in the park.

It is unclear as to whether the mayor has signed a management plan for 21 Muchmore Lane. He did not return calls to his office on Monday and Tuesday.

Community preservation fund rules require a detailed management plan for each property. The town administers the C.P.F. program and buys properties with money from it. If an acquired property is in the village, Supervisor Peter Van Scoyoc said on Tuesday, the purchase “is based on the support of the municipality.” The town is the entity actively involved in developing a property’s management plan, he said, adding that “in the past, we have made agreements with the village to manage a property once the actual management plan has been agreed upon.”

In the case of 21 Muchmore Lane, the town and village would jointly implement a management plan, Councilman David Lys, the town board’s liaison to the Land Preservation Department, said on Monday. The contract of sale “states that an arboretum in perpetuity would be dedicated in the name of his dad.”

Mr. Van Scoyoc said he was “very pleased to have been able to make this purchase from the Dayton family. It is quite a generous thing to make the properties available to the adjoining Herrick Park, which is a central and important property for the public to use. And a fitting tribute to his father as well.”

The transaction has been completed, Mr. Dayton said. “The town has tendered payment, I’ve tendered the deed,” but “everything is in escrow pending receipt of a signed operating agreement that would integrate the covenants and restrictions. The main thrust of those is a dedication to my father, and no other name shall be associated with that property.”

He remained frustrated this week, what with the status of the agreement as to the property’s designation honoring his father still unknown. “He has sullied an absolutely beautiful thing,” he said of the mayor.