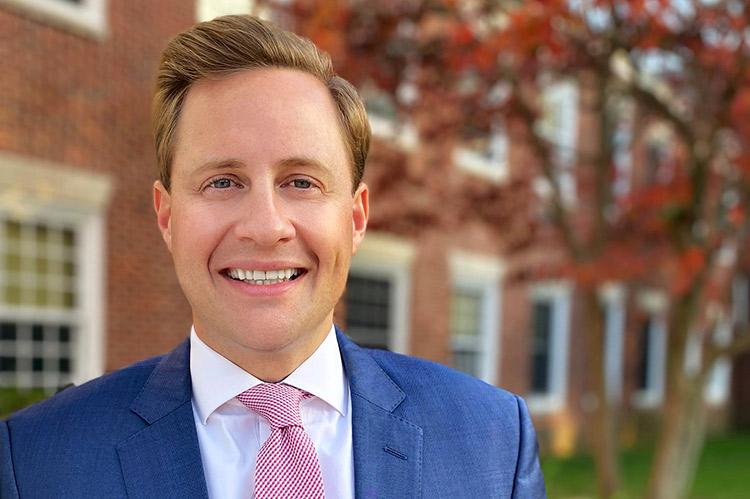 Mr. Figliola, who is executive vice president of Empire Government Strategies, a government relations firm, joins Robert Cornicelli, a veteran and advocate for veterans and the developmentally disabled, in seeking the Republican Party’s nomination to succeed Representative Lee Zeldin, who is campaigning for the Republican nomination for governor of New York.

On the other side of the political aisle, Suffolk County Legislators Bridget Fleming and Kara Hahn are among those seeking the Democratic Party’s nomination to represent the district.

Mr. Figliola grew up in Rocky Point and lives with his wife and three children in East Setauket. He is a graduate of the State University at Stony Brook and the University of Oklahoma’s Economic Development Institute.

“I’ve lived in the district my entire life, and I love this district,” he told The Star on Tuesday. “I chose to stay here after I got married to raise my family here. I spent lot of time on the East End as a child, both the North and South Forks, and wanted my children to have the same memories we had.”

The candidate has endorsed Mr. Zeldin’s campaign for governor. He criticized President Biden’s administration and voiced support for former President Trump. “Since the Biden administration, inflation has skyrocketed,” he said. “The net result, whether you’re Republican, independent, or Democrat, is you’re feeling the crunch. . . . The cost of living has gone up dramatically. Something has to give.”

He cited his background in economic development and job creation, and his understanding of government. “I’ve done a lot of work in Albany on behalf of small businesses and local water districts, and have worked with not-for-profits and on a wide array of different types of issues, trying to prevent tax increases on small businesses.”

“This administration has been throwing money to incentivize people not to work,” he said. “I have talked with countless small-business owners who are having a very difficult time hiring people. I’m in this for them.”

Mr. Figliola is on the board of the New York League of Conservation Voters’ Long Island chapter. “I championed a bill, working across the aisle in the State Legislature, that extended the statute of limitations on taxpayers being able to sue those that knowingly pollute our drinking water,” he said.

His campaign announcement listed job creation and the economy, fighting for life and liberty, protecting health care, supporting veterans and law enforcement, safeguarding the environment, and standing with Israel as the pillars of the campaign.

“As a man of faith, I’m going to fight for Republican ideals and values, something I hold very true to myself, but as a representative of this district I will work with everybody to the best of my ability,” Mr. Figliola said. “But there are some people in Congress that, frankly, don’t like this country very much and are doing everything they can to destroy it.”

Asked to identify those officials, he referred to a group of Democratic members of the House including Representatives Alexandria Ocasio-Cortez of New York, Ilhan Omar of Minnesota, and Rashida Tlaib of Michigan, known as “the Squad.” They, Mr. Figliola said, “have been very anti-Israel — something that is very important to me — and are looking for a redistribution of wealth.”

He described the insurrection at the United States Capitol, which happened one year ago today as a joint session of Congress convened to certify Mr. Biden’s electoral vote win, as “not a great situation, because ultimately, whether we agree or disagree with leaders, we don’t want to be in a position where people are busting through barricades. The media made too much hype of what it was, but that’s how the mainstream media is.”

Asked if Mr. Biden was the legitimate winner of the 2020 election, Mr. Figliola initially said, “I think Biden is the president of the United States.” When pressed, he said that Mr. Biden “was elected as president,” and when asked if he thought the election was fraudulent, said, “Biden is the duly elected president of the United States. I support President Trump, and hope to see his name on the ballot again in 2024.”