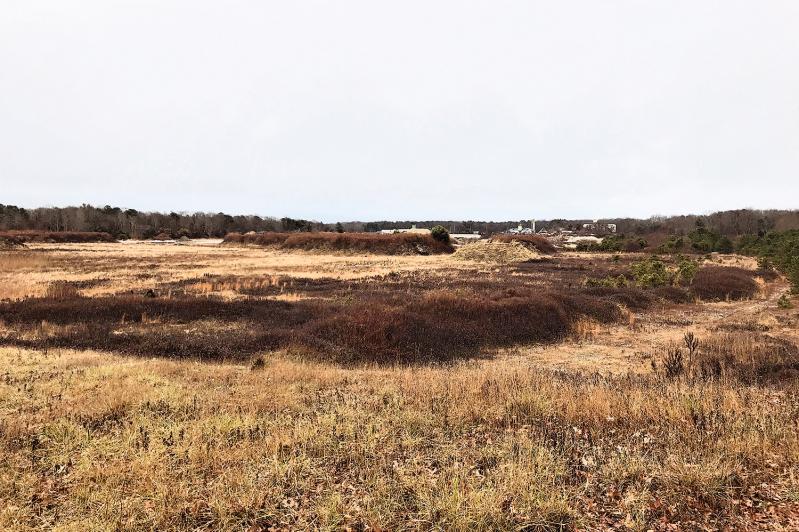 Tensions ran high last month as the East Hampton Town Planning Board discussed a proposal that would see the 70.4-acre reclaimed sand and gravel mine in Wainscott divided into 50 commercial parcels.

Known as the Wainscott Commercial Center, it is the largest development proposal to have come before the planning board for quite some time and one that the board believes could have significant environmental impacts. Because of that, the board asked the applicant to provide a detailed environmental review.

On Dec. 1, the board unanimously agreed that the draft environmental impact statement was incomplete and needed revision before it could be brought to a public hearing.

In its current form, the proposal runs counter to the Wainscott Hamlet Study that the town completed in 2019. That study envisioned a mixed use for the area, complete with parklands and low-income housing. The layout proposed for the property, however, includes no parklands and only a single acre set aside for eight low-income housing units.

The parcel, owned by the Tintle family, sits at the western gateway to the Town of East Hampton. The headwaters of an already troubled body of water, Georgica Pond, are only 500 feet away to the southeast.

“I don’t completely understand why the applicant wants to go through a process of pushing through this D.E.I.S. on a project that none of us are going to vote for,” Randy Parsons, a board member, said at the Dec. 1 meeting.

“That’s a very interesting comment to put on the record at this odd stage of the game,” responded David Eagan, the attorney representing the applicant. “We’re doing what we think is correct under law, under this process.”

Samuel Kramer, the board’s chairman, was quick to note that Mr. Parsons could not characterize how people may ultimately vote, though he added that there was broad consensus among the board

that 50 lots were too much for the subdivision.

The board wants more information on several issues. The applicant, “should provide an economic analysis of the need for commercial sites in the town,” should provide “a comprehensive final grading plan,” “a comprehensive final site landscaping plan,” and consider “the advantages and disadvantages of an alternative that is consistent with the town’s vision of the hamlet plan,” according to its Dec. 1 resolution.

Concerns about traffic, soil testing, and the impacts on the ground and surface waters all drew the attention of the board.

Ray DiBiase, a town consultant from L.K. McLean Associates, hired to study the traffic impacts of the proposed development, explained that there was “concern about the local road network.” Mr. Kramer agreed, saying that overflow into the residential neighborhoods to the west of the site, “cannot be denied.”

Mr. Parsons brought up Hedges Lane, a private road that lies to the immediate east of the development site. “We have correspondence from six or seven people on that road saying that they do not give permission for its use.”

Mr. Eagan said that the portion of Hedges Lane that the developer was looking to use was actually “owned by the applicant or an affiliate of the applicant.” As such, he said the discussion over Hedges Lane amounted to nothing more than “a tempest in a teapot.”

The board agreed with Mr. Eagan and voted to leave specific mention of Hedges Lane out of the resolution. Instead, board members focused on potential traffic generated by frustrated drivers seeking to avoid Route 27, by using the roads just west of the development site.

They agreed to include a sentence drafted by Eric Shantz, a senior planner for East Hampton Town, which read, “The traffic study should consider the impacts on the residential roads to the west and southwest including but not limited to Cowhill Lane, Eastgate Road, the Crossway, Westgate Road, Clyden Road, and Ardley Road.”

The board also discussed the

Ben Cancemi, a hydrogeologist from Fanning Philips and Molnar, an engineering firm hired by the town to monitor the groundwater, wanted more details on the amount of nitrogen that would enter the groundwater because of the development. He indicated, however, that the applicant had come to an agreement about the additional testing and provided an adequate plan to handle future concerns.

Kathy Cunningham, the board’s vice chairwoman, wanted to see more soil testing. Mr. Cancemi said that the plan was to collect samples from seven locations “in and around the area of the historic fire training exercises” just south of the railroad tracks. Those samples would be analyzed for the presence of perfluorooctane sulfonate, or PFOS, and perfluorooctanoic acid, or PFOA, which have been blamed in part for groundwater contamination in the hamlet.

According to the Environmental Protection Agency, “exposure to PFOA and PFOS over certain levels may result in adverse health effects.”

It’s estimated that 16,000 gallons a day will be discharged if all 50 lots were developed. Mr. Cancemi said that over a 70-acre site that shouldn’t have any significant effect.

Mr. Parsons then changed gears and asked about setting aside 25 percent of the area for open space. The study had called for open space and a one-acre parcel set aside for a possible future Long Island Rail Road station at Wainscott. Mr. Parsons pushed for preliminary information on these topics “If we don’t do that now,” he asked, “when are we going to do it?” He also questioned whether 50 lots were too many for the site.

“We are voting on a subdivision of a property,” said Mr. Kramer. “That’s what this is. Not the particular uses.”

But Mr. Parsons said that the town board has yet to confirm that there would be an acquisition of the property, and given that fact, he thought the planning board should approach the subdivision as if there were not going to be an acquisition by the town.

After they voted unanimously that it was, in fact, incomplete, Mr. Kramer noted the scope of the application, the largest now before the town. “We’ve given it a lot of attention. And frankly, it needs and deserves that attention.”

Mr. Eagan indicated that the revised environmental impact statement would be completed as quickly as possible, in the “early part of the new year.”

Should those revisions be approved as an addendum when the application is next presented to the board, the next step would be to hold a public hearing on the D.E.I.S.

“Once you have a D.E.I.S. that you find complete,” said Mr. Shantz, “that’s when the public comment portion begins.”

Daniel Ruzow, the board’s attorney, thanked Mr. Eagan, “the goal is to get it complete to the public.”